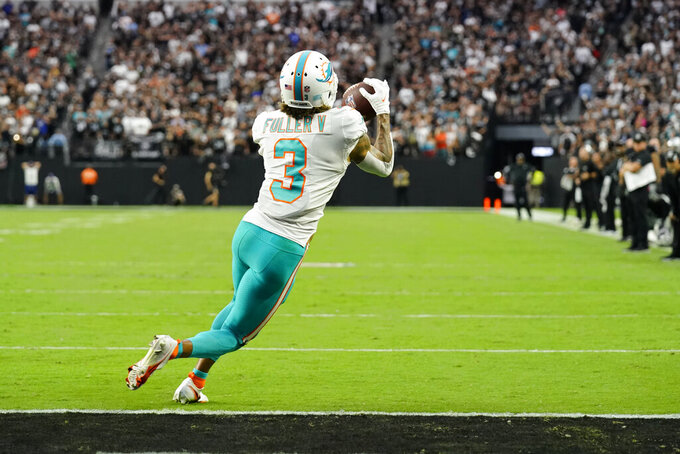 Miami Dolphins wide receiver Will Fuller (3) makes a catch for a two-point conversion against the Las Vegas Raiders during the second half of an NFL football game, Sunday, Sept. 26, 2021, in Las Vegas. (AP Photo/Rick Scuteri)

There are no moral victories in the eyes of the Miami Dolphins.

Despite rallying from 11 points down in the fourth quarter to force overtime, the Dolphins feel they let some plays get away from them in a 31-28 loss against the Las Vegas Raiders at Allegiant Stadium on Sunday.

“I thought they fought hard and gave great effort,” Dolphins coach Brian Flores said. “I know they’re disappointed. They fought, and we just got to get back to work.”

The Dolphins, coming off a 35-0 loss at home to the Buffalo Bills in Week 2, had to rally without starting quarterback Tua Tagovailoa after he sustained fractured ribs in the shutout loss. Tagovailoa was placed on injured reserve Saturday and will miss the next two games.

Veteran backup Jacoby Brissett stepped in to complete 32 of 49 passes for 215 yards, and led a 13-play, 82-yard-tying drive that capped off with a 1-yard touchdown run and the 2-point conversion pass to Will Fuller V.

“We know what we’re getting out of (Brissett),” said Raiders cornerback Casey Heyward Jr. “He’s a guy that can throw the ball, that has veteran presence. He did a great job out there, especially in the fourth quarter.”

Brissett and the Dolphins got out to a 14-0 first-quarter lead on the heels of their defense. Linebacker Elandon Roberts returned an interception of Derek Carr 85 yards for a touchdown, then Miami increased the lead to two scores on Malcolm Brown's 24-yard touchdown run four plays after a fourth-down stop.

Defensive back Byron Jones was called for a late hit after Raiders receiver Zay Jones downed a punt inside the 5-yard line, forcing Miami to start at the 1. Heyward tackled Jaylen Waddle for a safety off a screen pass on the first play of the drive to cut the Miami lead to 14-2.

“Bad play for us,” Flores said. “We had some momentum going for us that shifted the game a little bit.”

The Dolphins committed two 15-yard infractions during a 10-play, 95-yard Raiders drive. Roberts was flagged for hitting Raiders running back Peyton Barber late on the first play of that drive, then safety Jevon Holland was called for a hit on receiver Henry Ruggs III following a 21-yard reception on third-and-3.

The Raiders were gifted another 15 yards on their first drive of the second half thanks to cornerback Justin Coleman hitting Zay Jones out of bounds after converting a third down. Hunter Renfrow caught a 12-yard touchdown pass later in the possession to give the Raiders their first lead at 19-14.

“Any time you get penalties like that against an offense like the Raiders, you don’t want to give them extra yards,” Flores said. “Those hurt us for sure. One or two plays, and that’s what it really boiled down to today.”

Miami trailed 25-14 with 13:50 remaining after a 1-yard touchdown run by Barber. Daniel Carlson missed the extra point to keep the Dolphins in reach.

After Jason Sanders' field goal cut it to 25-17, the Dolphins' defense forced consecutive three-and-outs to give Brissett a chance. He converted a fourth-and-8 on the final drive in regulation with a 15-yard reception for DeVante Parker.

In overtime, Brissett faced a fourth-and-20 from the Miami 10-yard line and found tight end Mike Gesicki for 27 yards. That led to a 50-yard field goal from Sanders to tie it 28-28.

Flores said he was pleased with his “resilient group,” and has already flushed the game down and is looking forward to returning home in Week 4 against the Indianapolis Colts (0-3).

“Guys didn’t give up. Guys didn’t hang their heads,” said Dolphins defensive tackle Christian Wilkins. “We fought to just get it into overtime, but it wasn’t enough.”