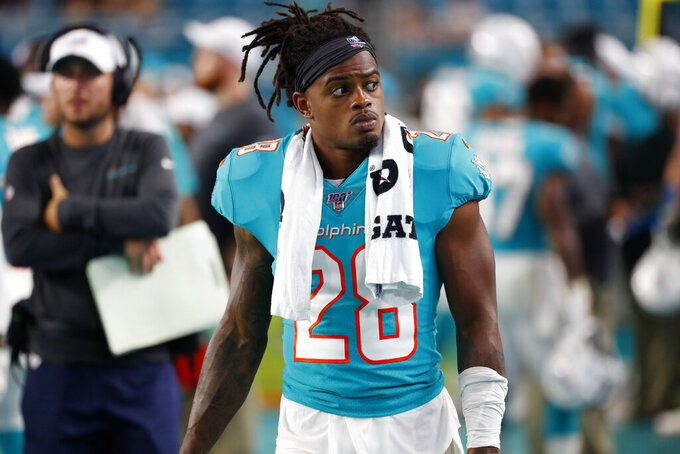 FILE - In this Aug. 8, 2019, file photo, Miami Dolphins safety Bobby McCain watches during the second half of a preseason NFL football game against the Atlanta Falcons in Miami Gardens, Fla. McCain will be disciplined by the team for his verbal confrontation with a 13-year-old boy who was rooting for the Buffalo Bills. (AP Photo/Wilfredo Lee, File)

Dolphins safety Bobby McCain regrets a series of confrontations he had with Bills fans, during which he allegedly spit on one's face following Miami's loss at Buffalo.

"I wish I could have handled myself better," McCain said Monday, without going into detail of what happened. McCain added he has spoken with coach Brian Flores, but declined to say whether he will miss any playing time in Miami's next game at Pittsburgh on Oct. 28.

"We're on the same page moving forward," McCain said, without taking any questions.

The team captain also is accused of having a verbal confrontation with a teenage Bills fan, during which he twice threatened to spit in the boy's face before the winless Dolphins' 31-21 loss to the Bills.

Flores didn't go into detail when he called it an internal matter in announcing earlier in the day that McCain will be disciplined by the team.

"I heard his side of the story. It's unfortunate," Flores said. "There's a standard we're trying to set here, professionalism in the way we go about things. And we need to live up to that standard, and we're going to."

Zylka said there is no official police report because the complaints were made through the Bills and forwarded to police. He would only say the complaints involve a Dolphins player spitting on a fan and threatening to spit on another.

Dylan Wentland told The Associated Press that McCain spit in his face as the Dolphins were leaving the field and heading to the locker room. Wentland believed he was targeted after coming to the teenager's defense before the game.

"I looked up the tunnel and as I turned around, Bobby McCain came up and spit right in my face and then ran up the tunnel," Wentland said. "It was so disgusting."

As police began escorting Wentland out of the stadium, he said numerous fans informed officials of what happened. It was at that point he was asked to file a complaint. He said he already has been contacted by NFL security officials.

Wentland said he has been attending Bills games for about 15 years and has seats four rows from the field and along the ledge overlooking the tunnel. He said the teenager and father sit behind him.

Wentland said the trouble began as the Dolphins took the field for pregame warmups when one player made a disparaging remark about living in Buffalo.

The teenager responded by calling the Dolphins irrelevant. Wentland said McCain threatened to spit at the teen then, and once again as the Dolphins re-entered the field before kickoff.

A video Wentland said was shot by his fiancee shows the second occurrence, during which a fan is heard calling McCain "a bad role model."