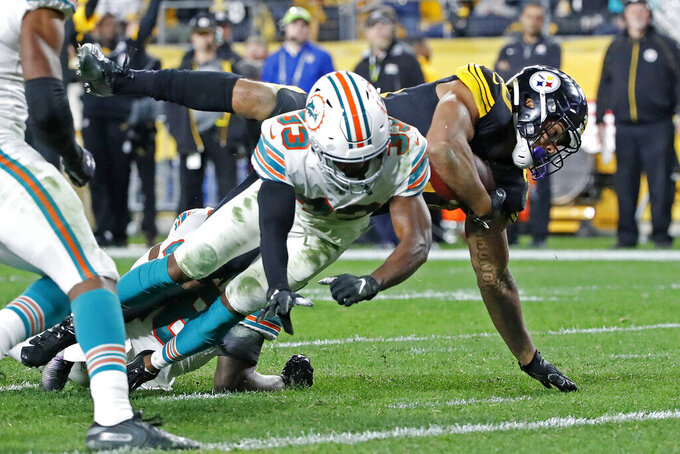 Pittsburgh Steelers running back James Conner, right, dives for the end zone for a touchdown with Miami Dolphins cornerback Jomal Wiltz (33) defending during the second half of an NFL football game in Pittsburgh, Monday, Oct. 28, 2019. (AP Photo/Don Wright)

PITTSBURGH (AP) — The Miami Dolphins let another one get away.

The Dolphins continue to make progress following a horrific start to the season, but they remain winless after a 27-14 loss to the Pittsburgh Steelers on Monday night.

"We just have to continue to keep fighting," Dolphins QB Ryan Fitzpatrick said. "That's just kind of the place that we're at right now."

The Dolphins have lost seven consecutive games this season and 10 straight dating to last season. The Dolphins have lost 16 of 20 overall since winning three straight to begin the 2018 season. Miami's last win came at home against New England on Dec. 9, 2018, more than 300 days ago. In 2011, the Dolphins lost their first seven games, but finished 6-10.

"People can say what they want outside, but I think we're a good football team," tight end Mike Gesicki said. "We're making plays, clearly not enough, but I think we're putting some good stuff out there. We just have to be able to finish games."

The Dolphins were outscored 163-26 in their first four games, but their last three losses have come by a combined 24 points. Miami led in the fourth during last week's 10-point loss at Buffalo, and the Dolphins held a 14-0 lead through one quarter until Pittsburgh rallied with the final 27 points.

"We had opportunities two weeks in a row," Fitzpatrick said. "We had a couple nice drives early and good momentum. Guys were out there having fun."

Xavien Howard intercepted Miami's second pass of the season on Mason Rudolph's first throw of the game. The Dolphins capitalized from the Pittsburgh 26, as Fitzpatrick gave Miami an early 7-0 lead with a 5-yard touchdown pass to Albert Wilson. Prior to the touchdown, the Dolphins held a lead for 10 minutes, 48 seconds through six-plus games this season.

Fitzpatrick and the Dolphins capitalized with a second touchdown after the Steelers turned the ball over on downs. Allen Hurns closed the 11-play, six-minute series by bouncing off four Pittsburgh defenders on his way to a 14-0 lead for the Dolphins. It was Miami's first 14-point lead against any opponent since Week 5 of last season, a 10-point loss against Cincinnati.

"We had a great start, but we didn't finish strong," Howard said. "That's how every game has been. We haven't been finishing strong."

The first interception came in the final two minutes of the first half. Minkah Fitzpatrick's second turnover against his former team — on Miami's first drive of the second half — was a deep throw that gave Pittsburgh the ball at its own 3-yard line.

Minkah Fitzpatrick, who played two games with the Dolphins this season, is the first player in NFL history with multiple interceptions in a game against a team for which he played a game earlier that season. Pittsburgh traded a first-round pick to the rebuilding Dolphins in September for the 22-year-old Minkah Fitzpatrick — a No. 11 pick in 2018 — just hours after losing safety Sean Davis with a shoulder injury.

Ryan Fitzpatrick ended 21 of 34 for 190 yards with two touchdowns and two interceptions.

"The first (interception) was unfortunate," Ryan Fitzpatrick said. "It got tipped in the air and they made a play. The second one was as good as a punt. I was OK with that one."

With 25 seconds to play in the half, Pittsburgh's Diontae Johnson turned a short cross into a 45-yard touchdown sprint on third-and-20, as the Steelers trailed 14-10 at the break. Rudolph, who missed Pittsburgh's Oct. 13 win against the L.A. Chargers with a concussion, shook off a shaky start Monday to finish 20 of 36 for 251 yards with two touchdowns and an interception. James Conner rushed for 145 yards and a touchdown for Pittsburgh.

The Steeler offense went 97 yards on 12 plays following Minkah Fitzpatrick's second interception. JuJu Smith-Schuster, who finished with 103 yards receiving, capped the drive with a 26-yard circus catch over Miami DB Chris Lammons in one-on-one coverage to give Pittsburgh the lead for good.

"It was 14-10 at halftime, we had opportunities in the second half and we didn't take advantage of them," Dolphins coach Brian Flores said. "We turned the ball over four times. As a total team, we didn't do enough to win the game."