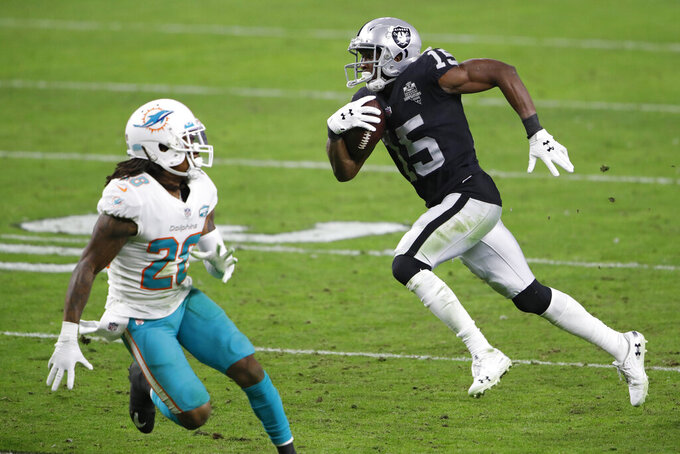 LAS VEGAS (AP) — With a defender dragging him down by his facemask, Ryan Fitzpatrick still managed to launch the pass that might have saved the Miami Dolphins' season.

Fitzpatrick's desperation heave to Mack Hollins set up Jason Sanders’ 44-yard field goal as the Dolphins drove the field in the final 19 seconds to move one step closer to a playoff berth with an improbable 26-25 victory over the Las Vegas Raiders on Saturday night.

“We just felt like we needed a spark, trying to win the game,” coach Brian Flores said about the decision to bench rookie Tua Tagovailoa for Fitzpatrick in the fourth quarter.

“If we have to go to a relief pitcher in the ninth, that’s what we’ll do. Fitz is always ready to go. He went in and moved the ball for us. We were able to make enough plays to win the game.”

Fitzpatrick led three scoring drives in the fourth quarter for Miami (10-5) with the final one the most unlikely after the Raiders (7-8) bypassed a gimme touchdown for a field goal. The move to play for the field goal backfired as the Raiders lost on a kick instead.

The Dolphins moved a half-game ahead of Baltimore in the AFC playoff race and can clinch a wild-card berth with a win next week at Buffalo.

“I want to go,” said Fitzpatrick, who hasn't made the playoffs in his 16-year career. “I want to feel what it’s like. I feel like we have a special team. I’m proud I’ve been able to contribute to that.”

The Raiders were eliminated with their fifth loss in six games and will be out of the postseason for the 17th time in 18 seasons.

Coach Jon Gruden chose to run down the clock for a go-ahead field goal instead of trying for a touchdown with Josh Jacobs going down on purpose at the 1-yard line and Derek Carr taking a knee to set up Daniel Carlson’s 22-yard field goal with 19 seconds left.

One play was enough to move the Dolphins from their own 25 into field-goal range. Hollins was left open for a 34-yard pass that Fitzpatrick threw while being dragged down by the face mask by Arden Key.

“The odds are pretty low there of us being able to complete something with the proper yardage,” Fitzpatrick said. “I didn’t know it was complete. My head was getting ripped off.”

The penalty moved the ball down to the Las Vegas 26, setting up Sanders’ winning kick.

The Dolphins became the second team in the past 20 years to take over that deep in their territory in the final 30 seconds when trailing and drive for the winning score. Green Bay did it to Detroit five years ago on a desperation pass from Aaron Rodgers to Richard Rodgers.

The back-and-forth final few minutes from Fitzpatrick and Carr made up for a game that lacked offensive fireworks for most of the night. After the Dolphins tied the game at 16 with 4:01 to play, the Raiders took little time to answer.

A holding penalty on first down put them in a hole, but Carr got them right out of it when he scrambled away from pressure despite an injured groin and launched a deep pass to Nelson Agholor, who outjumped Byron Jones for the catch.

Agholor then juked safety Bobby McCain and raced to the end zone for the 85-yard score that put the Raiders up 22-16 after Carlson missed the extra point.

That looked as if it could be costly when Fitzpatrick answered with a short pass to Myles Gaskin that turned unto a huge gain. Gaskin broke a tackle from Raekwon McMillan and then got sprung from some downfield blocks on the way to a 59-yard touchdown. Sanders’ extra point gave the Dolphins the 23-22 lead.

That proved short-lived when Jones was called for the penalty on a deep throw to Agholor that gave the Raiders the ball at the 22. Las Vegas then ran out most of the clock but not enough.

“That’s what football is all about, especially in the NFL,” Gaskin said. “Probably the most fun game I’ve played in my life.”

Tagovailoa struggled to move the ball with his 22 passes gaining only 94 yards. He did connect on a 10-yard TD pass to Gaskin that tied the game in the third quarter, but was pulled in the fourth for Fitzpatrick with the Raiders leading 16-13. Flores said Tagovailoa will start next week.

After setting an NFL record for tight ends with 425 yards receiving the past three games, Las Vegas’ Darren Waller delivered once again for the Raiders. He had five catches for 112 yards, giving him 1,079 yards on the season for his second straight 1,000-yard campaign. The only other Raiders TE with a 1,000-yard season is Todd Christensen, who had three in the 1980s.

Dolphins: WR Jakeem Grant left in the second half with an ankle injury. ... LB Elandon Roberts was taken off on a stretcher with a knee injury in the third quarter and didn’t return.

Raiders: G Denzelle Good left the game with an ankle injury late in the first half. ... Jacobs needed an IV because he came into the game not feeling well.