Dolphins try to regroup from rout _ bring on the Patriots 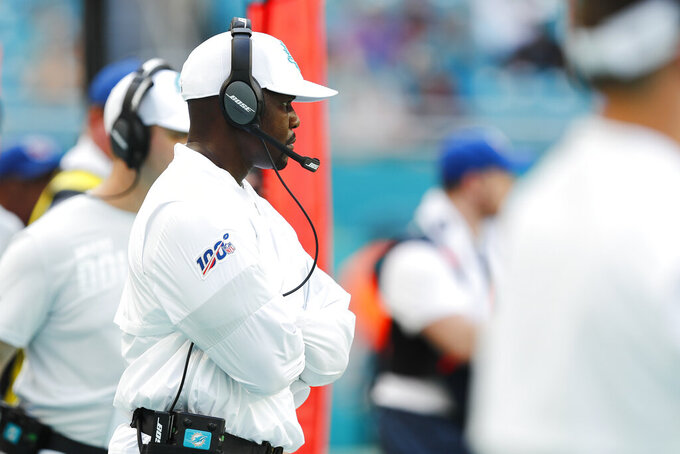 MIAMI (AP) — If the Miami Dolphins are trying to win, there's little evidence so far. A 59-10 drubbing at home against Baltimore in coach Brian Flores' debut raised the specter of an 0-16 season — and the No. 1 draft pick that would be the reward. Now the Dolphins will host their perennial AFC East nemesis, New England.

In his first start for the Dolphins, journeyman quarterback Ryan Fitzpatrick was the least of their problems. Despite no running game and little protection he threw for 185 yards and a score, and at least two long passes were dropped, one in the end zone.

Josh Rosen, who lost a training camp battle for the starting job, entered with the score 52-10 and played no better than most of his teammates. He had one completion, one sack and one interception.

Fitzpatrick, the Dolphins' 20th starting QB since Dan Marino retired, will get the nod again Sunday. A change at that position won't fix Miami's problems.

The Dolphins were overmatched up front on both sides of the ball, as will likely be the case all season. The dearth of talent is such that right tackle Julién Davenport and right guard Danny Isidora, who both joined the team after the exhibition season, played every offensive snap. Because of bad blocking, Miami's three running backs combined for 12 yards on 10 carries.

The manhandling was even worse on defense, where three players acquired just this month — John Jenkins, Avery Moss and Steven Parker — saw significant action. The result: Miami allowed a franchise record 643 yards. The Dolphins gave up the most points in the first half of a season opener in the NFL's 100-year history — 42.

"Obviously I didn't do a good enough job getting this team ready to play," Flores said Monday.

His front seven applied little pass rush against Lamar Jackson, who threw five touchdown passes, and the Ravens rushed for 265 yards. This week's matchup of the Miami defense against Tom Brady and Antonio Brown is staggering to contemplate.

"We can't let one game dictate our whole season, regardless of what just happened," linebacker Raekwon McMillan said. "If we would have won by 60, we can't let that win dictate the whole season. We're going to be better, I can promise you that."

DeVante Parker, whose tantalizing skills have been mostly unrealized for five seasons, made a spectacular leaping 49-yard catch.

Flores denies the Dolphins are tanking this year, and he's handcuffed because the roster is so barren of talent, but the Dolphins appeared unprepared in the opener. Nine penalties and countless botched assignments made an ugly game even uglier.

If this continues, Flores will be hard-pressed to keep the locker room together.

"Every team deals with adversity; that's part of an NFL season," he said. "We have to be able to endure that and stand up to it and not make excuses and not point fingers and not feel sorry for ourselves, and get back up and go back to work and fight another day."

Dynamic receiver Albert Wilson, who missed the final nine games last year because of a hip injury, has been nursing a calf issue and was limited to six snaps.

"It brought me back into that same feeling of where I left off," Wilson said. "I have to do a better job of taking care of my body."

15 — games to go, and the Dolphins might not be favored in any of them. They're 16 1/2-point underdogs at home Sunday.

Bring on the Patriots.