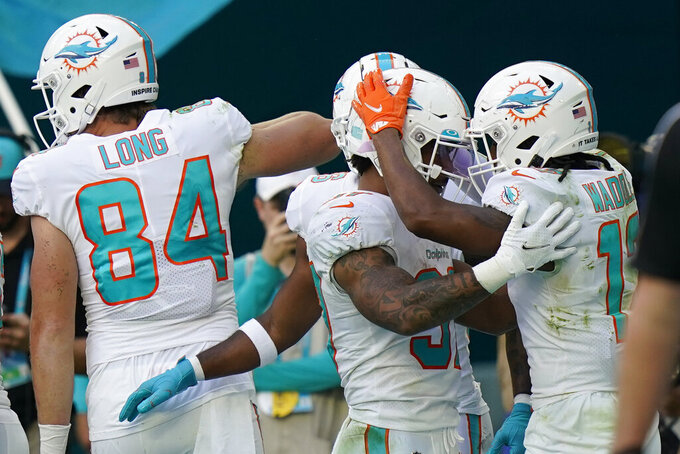 Miami Dolphins running back Myles Gaskin (37) celebrates with teammate Jaylen Waddle (17) after scoring a touchdown during the second half of an NFL football game against the Carolina Panthers, Sunday, Nov. 28, 2021, in Miami Gardens, Fla. (AP Photo/Lynne Sladky)

In all three phases, the Miami Dolphins had all the answers.

Jaylen Waddle had nine catches for a season-best 137 yards and a touchdown, and the Dolphins feasted off five sacks and three interceptions on the way to beating the Carolina Panthers 33-10 on Sunday.

“We look like the team that we kind of wanted to be at the beginning of this year," Tagovailoa said.

Myles Gaskin had two short rushing scores for Miami (5-7), which became the sixth team in NFL history to immediately follow a 1-7 start with four consecutive wins. Duke Riley blocked a punt that led to a score for Miami.

The quarterback matchup was totally one-sided. Tagovailoa completed 27 of 31 passes for 230 yards and a score. Newton was pulled in the fourth quarter after completing just five of 21 passes for the Panthers (5-7), who lost for the seventh time in their past nine games.

“As it evolved, or devolved I should say ... I purely believe Miami outplayed us today, outcoached us today," Panthers coach Matt Rhule said. “They were better than us today. Pretty simple to me."

Newton finished with 92 yards passing, no touchdowns and two interceptions. It all added up to a quarterback rating of 5.8, by far the worst of his career. He did have Carolina’s lone touchdown, a 1-yard spin in the first quarter.

It was the lone hurrah for the Panthers.

“Nothing that they did was out of the ordinary," Newton said. “It wasn't like we weren't prepared. It just comes down to execution."

Jaelan Phillips had three of the Dolphins' five sacks, and Nik Needham, Xavien Howard and Jevon Holland had interceptions for Miami.

The Panthers are 0-7 when allowing 21 or more points this season, 5-0 otherwise. And the Dolphins had 21 on the board by halftime, thanks to a blocked punt and two scoring drives.

Justin Coleman grabbed Riley's blocked punt and plowed in from 2 yards to get Miami on the board. Waddle had a touchdown catch from Tagovailoa after one of Newton’s interceptions set up a 9-yard drive — punctuated by Waddle actually doing a waddle in the end zone — and Gaskin scored on a direct snap to make it 21-7.

When Miami’s lead got to 27-10 in the third quarter, Panthers defensive end Brian Burns lit into teammates on the sideline, a tirade captured by television cameras.

If he was hoping it would provide a spark, it didn’t.

“Nobody comes out and thinks they're going to lose or prepares to lose a game," said linebacker Haason Reddick, who was flagged for a costly taunting penalty on the drive where Miami went up 27-10 on Gaskin's second TD run. “The fact that we lost is probably what caused that."

Newton was long gone by the end, and the Dolphins’ resurgence after the disastrous eight-game start continues. They've allowed 46 points in their past four games, and are now 16-7 in games played in November, December and January in coach Brian Flores' three seasons.

Panthers: RB Christian McCaffrey rolled his ankle in the first half. G John Miller was held out of the game with an ankle injury.

Dolphins: Miami was without S Brandon Jones, held out with knee and elbow injuries.

When Miami went up 30-10 in the fourth quarter, it was the Dolphins’ first time enjoying a lead of 20 points or more since Nov. 1, 2020, against the Los Angeles Rams. Carolina trailed by 22 points against the New York Giants and Dallas Cowboys earlier this season.

The Florida Panthers and Miami Heat were both off on Sunday, with no games or practice for either team. That meant it was a football day; Panthers forward Jonathan Huberdeau was in the front row of seats at one end and wearing a Dolphins jersey, while Heat center Bam Adebayo — a North Carolina native — also was at the game and in a Dolphins hat.