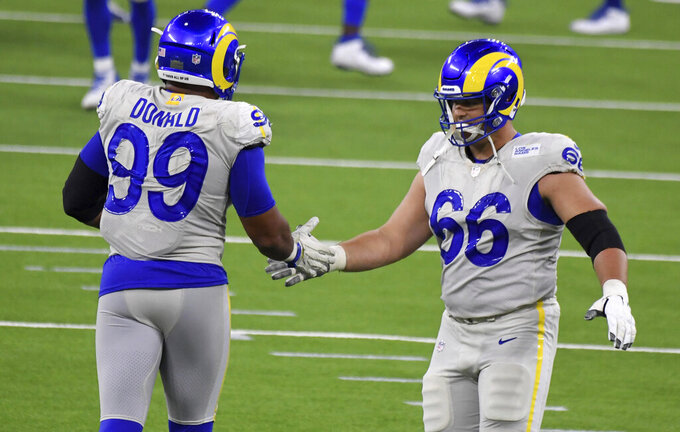 THOUSAND OAKS, Calif. (AP) — Aaron Donald chuckled when he was told Buffalo offensive coordinator Brian Daboll jokingly suggested that the Bills' best chance against the Los Angeles Rams' dominant defensive tackle was if he missed the bus to their game Sunday.

Among his many other sterling qualities, Donald is also never late.

Donald then smiled and did his best to disguise his intentions for Buffalo.

“I would think we could just not worry about me and just let me play,” Donald said. “Don’t give me any other attention. You ain’t got to slide, you ain’t got to double-team me, nothing. Let’s all play football fair, just one on one, and don’t have any of that.”

Donald is in his seventh season as the biggest problem facing any offense going against the Rams (2-0). Although he is coming off a quiet start to the season by his lofty standards, the Bills (2-0) realize the challenge they're facing in No. 99.

“He’s as premier of a linemen as I’ve seen,” Daboll said. “He’s disruptive. He’s got power, he’s got strength, he’s got speed, he’s got quickness. he’s got leverage, he’s got a motor, he plays intelligently. There’s plays on tape where you watch him and just say, ‘Oh boy.’"

After sacking and harassing Dak Prescott in the season opener, Donald had just one tackle and no sacks in the Rams' 37-19 win at Philadelphia last week while facing the regular double-teams that have been the story of his NFL life. His presence fundamentally alters most offenses' strategies even when he doesn't produce eye-popping numbers, but Donald has the most fun when the Rams' opponents either prepare poorly or aren't physically up to the task of stopping him.

Donald prefers the attention to go to his teammates — such as linebacker Micah Kiser, who had a breakout game in Philadelphia. Kiser was the NFC's defensive player of the week after racking up 15 tackles and forcing a fumble in his second career game as a defensive starter.

There's another way to measure the supreme importance of Donald to the Los Angeles defense: Kiser is only the fourth Rams player to win the NFC defensive player of the week award during the franchise's five seasons back home in LA.

Donald has won the award four times in the previous four years, but only two Rams had joined him over those 68 game weeks. Linebacker Samson Ebukam won it in November 2018 for his two-touchdown performance in the Rams' epic Monday night victory over Kansas City, and cornerback Trumaine Johnson won it way back in Week 1 of the 2017 season.

Kiser is still relatively untested, but Donald is optimistic Kiser will prove to be a strong replacement for leading tackler Cory Littleton, who left for the Raiders as a free agent.

“Micah is playing tough,” Donald said. “He’s playing confident. Every time you look around, he’s by the ball. That’s the type of linebacker you want. That’s what good linebackers and great linebackers do. They’re always trying to make plays.”

NOTES: The Rams put LG Joe Noteboom (strained calf) on injured reserve and activated LB Natrez Patrick, who spent last season on Los Angeles' practice squad and started there again this season. OL Jeremiah Kolone was signed to the practice squad, where he spent much of the past two seasons. Noteboom can return in three weeks. ... Rookie RB Cam Akers missed his second straight practice with separated rib cartilage. The two-game starter is “making progress, maybe a little bit slower than I expected,” McVay said. The team hasn't projected whether Akers can play Sunday. ... RB Malcolm Brown (pinky finger) returned to practice Thursday after missing Wednesday. ... OL David Edwards will start in Noteboom's place Sunday, and the Rams have no public qualms about his ability to do everything required. “I think that’s just a credit to our depth that a guy like David Edwards isn’t in that starting five,” offensive coordinator Kevin O'Connell said. “So now we can feel great about if something does happen from an injury standpoint, you’ve got some depth at multiple spots like David going in there, and hopefully we don’t miss a beat.”