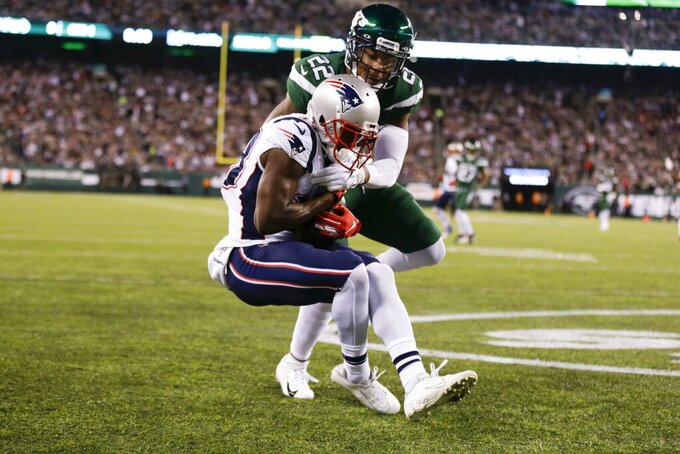 FOXBOROUGH, Mass. (AP) — Despite the names and faces changing at an almost dizzying rate, Phillip Dorsett tries to remain unfazed.

In his fifth season as an NFL wide receiver and third with the New England Patriots, Dorsett may not have the name recognition of Antonio Brown, Josh Gordon or Demaryius Thomas, all of whom were projected to be major contributors to the Patriots' receiving group either in preseason or over the first seven weeks of the regular season.

But Dorsett has quietly carved out his niche and earned Tom Brady's trust, helping to keep the unbeaten Patriots' passing game productive over their 7-0 start.

"It's nothing new," Dorsett said of the flurry of roster changes in his position group. "It happens every year. That's the good thing that makes this group really, really good in that we're interchangeable and resilient. I got traded two years ago, Josh got here last year, and we've got (Mohamed) Sanu now. We're all here to help each other and here to just make each other better."

The changes have been significant and swift.

Thomas, the former Denver Bronco, returned from an Achilles' tendon injury and began competing for a roster spot near the end of training camp, only to be traded to the New York Jets at the conclusion of the Patriots' courtship of Brown, whose well-publicized conflicts with the Oakland Raiders' front office made him available.

Brown played one game, catching four passes against Miami on Sept. 15, before a growing controversy over accusations of sexual misconduct prompted the Patriots to release him on Sept. 20.

Gordon, whose suspension for violating the league's substance abuse policy was lifted entering the preseason, was placed on injured reserve this week with a knee injury. He was the Patriots' third-leading receiver with 287 yards on 20 catches.

"It's tough, because obviously, he's a good friend of mine," Dorsett said.

Amid the chaos, however, Dorsett has been productive and reliable. Despite missing one game with a hamstring injury, the veteran from the University of Miami has caught 18 passes for 243 yards and four touchdowns, the latter leading the position group.

Much as he adheres to Bill Belichick's "do your job" philosophy, Dorsett said he tries to lend a hand to others trying to fit in with the ever-changing group.

"Obviously it's a big thing, you want to go out there and take care of yourself in being consistent, being here and doing everything you can," Dorsett said. "But at the end of the day, you're trying to help everyone else, too. We're all on the same team and I can't really just focus on myself. We all have the same goal, and you can't do it being selfish. Everybody else has to pick it up."

The Patriots will be working another veteran receiver into the mix Sunday when they play host to the Cleveland Browns (2-4), having traded a 2020 second-round draft pick to Atlanta for eighth-year veteran Mohamed Sanu. Dorsett said he is aware of Sanu's skills and he welcomes his addition.

"It's only been one practice, one walkthrough, but I watched him when he was in Atlanta, when he was in Cincinnati, even when he was at Rutgers," Dorsett said. "He's smart and he's going to be able to pick it up."

In the meantime, Dorsett wished Gordon a speedy recovery.

"Everything has to be positive," Dorsett said. "Obviously he's a big target and he's had a lot of production here, but it's the 'next man up' mentality here. We all know that. At the end of the day, it's football. These things happen and the next guy has to step up and be able to replace someone."