Downtrodden Bengals will stick with QB Allen, for now 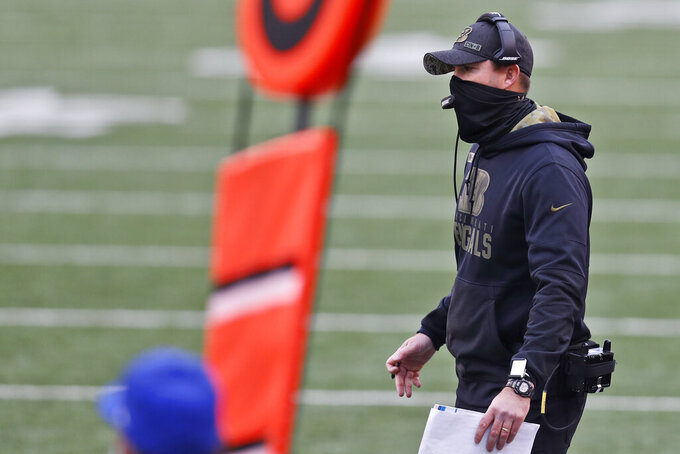 CINCINNATI (AP) — The Cincinnati Bengals started the season with a hot-shot rookie quarterback and lots of hope.

Now they're going with a quarterback who was on the practice squad two weeks ago, and with five games left they remain stuck on last year's win total — two.

In short, it's shaping up to be another typical Bengals year.

Brandon Allen, who had started all of three NFL games, was moved into the starting role when Heisman Trophy winner Joe Burrow suffered a season-ending knee injury Nov. 22. He was unremarkable in Cincinnati's 19-17 loss to the New York Giants on Sunday, but second-year coach Zac Taylor said he's staying with the 28-year old who, because of COVID-19 protocols, has been physically separated from the team's other two quarterbacks most of the season.

Allen got the starting job over Ryan Finley, who was Burrow's backup but looked overwhelmed when he had to come into the game in the second half of the loss to Washington after the top overall draft choice got hurt.

“(Allen) had three days of reps with our guys, throwing with our guys," Taylor said. "You try to consider that a little bit in what you put in the plan, in what he feels comfortable with to get him started on his first week here. That will continue to grow as he gets going and gets more comfortable with everything we’re doing. I expect good things from Brandon. We had an opportunity today and we just didn’t take advantage of it.”

Taylor said Allen played well enough to earn another opportunity next week against the Miami Dolphins.

Allen was 17 for 29 for 136 yards and an interception. He also threw a 1-yard touchdown pass to Tee Higgins in the fourth quarter that was set up by a pass-interference penalty in the end zone. But Allen fumbled while being sacked on the Bengals' last drive to seal it for the Giants.

“Throughout practice the whole week, he was putting them where they needed to be, and I feel like he played good today,” Higgins said. “There were some mistakes made, but that happens in football.”

The Bengals (2-8-1) on Saturday signed Kevin Hogan — a journeyman whose limited stats are just a little better than Allen's — to the practice squad, and it wouldn't be surprising if he was thrown into the competition to start at some point.

It's not all on the quarterbacks for Cincinnati, which has been plagued by injuries on both sides of the ball. The running game stalled when Joe Mixon went out with a foot injury on Oct. 18 and Giovani Bernard had to carry the load. Knowing that the Bengals were one-dimensional, the Giants sometimes dropped eight defenders into pass coverage.

Cincinnati has come up short in some close games this year. Players say the challenge now is to keep coming to work with the same desire to win.

Taylor, who is 4-21-1 in his two seasons, said the results are not due to lack of effort.

“They’re playing hard for each other, and it’s going to turn for us at some point,” he said. “It’s frustrating, you’re sick to your stomach, it sucks. It’s not fun to lose, but we know that this tide is gonna turn for us, and we’re going to look back on this and this was a necessary part of our growth. But we need to get some wins to show for all the work we’re putting in.”