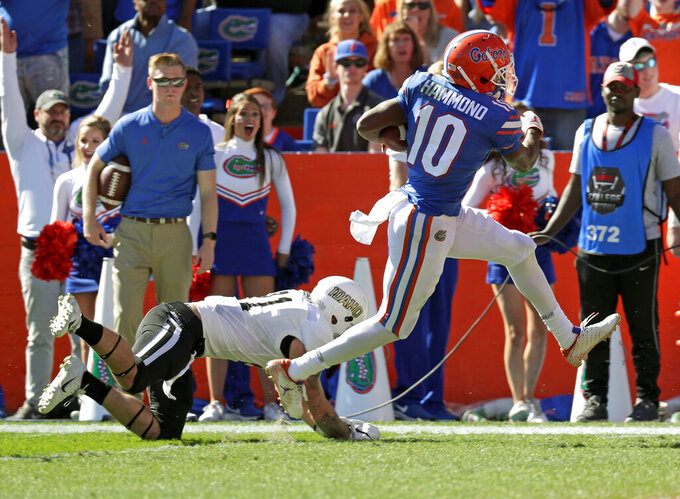 FILE - In this Nov. 17, 2018, file photo, Florida wide receiver Josh Hammond (10) runs past Idaho defensive back Jordan Grabski for a touchdown during the first half of an NCAA college football game in Gainesville, Fla. Hammond was “a little shocked” he didn’t get an invite to the NFL combine. He was equally surprised he didn’t get asked to the Senior Bowl. Those collegians who never got a full look _ or even a slight glance _ from NFL teams because of the coronavirus pandemic could wind up sinking in the draft, or falling out of it completely. (AP Photo/John Raoux, File)

GAINESVILLE, Fla. (AP) — Florida receiver Josh Hammond was “a little shocked” he didn’t get an invite to the NFL combine.

He was equally surprised he didn’t get asked to the Senior Bowl.

He settled for a spot in the East-West Shrine Game, figuring any NFL team that missed him at the second-tier all-star game would get another shot at Florida’s pro day in late March. He also was banking on one-on-one visits with teams, a chance to really put his character and football IQ on display for general managers, coaches and scouts.

But once the coronavirus pandemic wiped out most pro days and all pre-draft visits, Hammond found himself in a tough spot — with plenty of company. He is one of hundreds of pro prospects who haven’t had formal medical checks before the NFL draft, a vital look at vitals that teams consider as important as anything they see on tape.

“Not having that kind of sucks,” Hammond said. “There’s really no way to get that done on FaceTime or Zoom, either.”

Hammond has four years of highlights from his days with the Gators. He caught 87 passes for 1,138 yards and six touchdowns, most of those numbers the last two seasons under coach Dan Mullen. He was a team captain in 2019 and only missed one game (in 2017) because of injury. His older brother, Frankie, also spent two years in the league.

It should be enough, but Josh Hammond knows it’s not. Teams want to poke and prod prospects before spending draft capital — and sometimes millions more — on them.

Five years ago the then-St. Louis Rams drafted Missouri receiver Bud Sasser in the sixth round, then cut him five weeks later following a failed physical. Sasser had a pre-existing heart condition that prevented him from playing.

Despite catching 77 passes for 1,003 yards and 12 touchdowns in 2014, Sasser was not invited to the combine or any all-star game. So NFL teams couldn't put him through the rigorous physical testing that combine participants undergo. His condition went undetected.

Sasser’s case still serves as a reminder in NFL circles.

“If a player was at the combine and they were a late-round guy, it’s not an issue,” Jacksonville Jaguars general manager Dave Caldwell said. “The biggest issue that I think we face is the medical portion of these guys that were not at the combine and having to draft a player that you are not 100 percent sure of the medical.

“It is one thing to draft a player and not have an accurate 40 time or short shuttle time, but to have a player come in and then all of a sudden you realize he has a medical issue that disqualifies him after you draft him, that is an issue.”

A little more than a dozen college programs held pro days before the NFL barred all in-person, pre-draft visits, effectively canceling pro days and prospects’ visits to team headquarters. Auburn, Clemson, Oklahoma, Oregon and Wisconsin were the most prominent programs that got pro days in.

Prospects and their agents have gotten creative since, sending teams videos of workouts. FaceTime, Zoom, Skype or Microsoft Teams are among mediums being used for interviews. Teams are working with college athletic training staffs to procure detailed medical information.

But none of it can truly replace in-person contact.

“A lot of teams call and ask similar questions and test as much knowledge as they can through FaceTime,” Hammond said. “A lot of teams are big on character, and I think that’s something that probably would have worked in my favor. My character and my football IQ, those can't been seen through the phone.”

Like Hammond and hundred of others, Indiana receiver Nick Westbrook was forced to find ways to train on his own to stay in shape while sending videos to teams.

“It's kind of like the first game of the season and you’re building up and everything’s building up for this moment," Westbrook said. "And for it not to be there, it’s kind of tough to handle, especially for a guy like me who didn’t get a combine invite. So I had a lot to prove.”

About 70 players drafted in 2019 did not attend the combine, but most of them visited NFL teams. The travel ban could reduce that number significantly.

“We feel like we have a lot of good information,” Caldwell said. "Some of the guys have done their own pro days and we have watched them. We have put a stop watch to the video, albeit not accurate and we don’t know if it is exactly 40 yards, but we have done it.

"We have some gauge of what guys can actually really do and that has been good. ... If we draft a guy, we are going to feel good about having the information that we need outside of medical.”