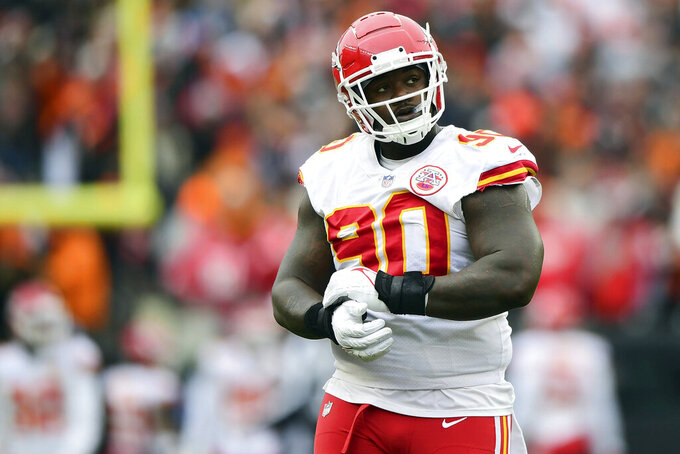 FILE - Kansas City Chiefs defensive tackle Jarran Reed (90) looks on during an NFL football game against the Cincinnati Bengals, on Jan. 2, 2022, in Cincinnati. Reed says he’s heading to the Green Bay Packers. Reed indicated his choice Tuesday, March 22, 2022, by tweeting, “Let’s gooooo #GoPackGo so thankful for the opportunity to continue my career in Green Bay.” The Packers haven’t yet announced his addition. (AP Photo/Emilee Chinn, File)

Reed indicated his choice Tuesday by tweeting, “Let’s gooooo #GoPackGo so thankful for the opportunity to continue my career in Green Bay.” The Packers haven’t announced his addition yet.

Reed played for the Kansas City Chiefs last season and had 2½ sacks plus a fumble recovery. He spent his first five seasons with the Seattle Seahawks, who selected him in the second round of the 2016 draft out of Alabama.

The Packers had spent much of the free agency period focusing on keeping their own players. Over the last week, they reached deals to keep All-Pro linebacker De’Vondre Campbell, cornerback Rasul Douglas and tight end Robert Tonyan in Green Bay. They also signed former Chicago Bears punter Pat O’Donnell.

By adding Reed and keeping Campbell and Douglas, the Packers hope to strengthen a defense that could face a greater burden this season as the offense adjusts to life without All-Pro receiver Davante Adams. The Packers traded Adams to the Las Vegas Raiders last week for a first-round pick and second-round pick.

The Packers’ major loss on defense has been outside linebacker Za’Darius Smith, who was released in a cap-saving move.

Smith recorded a combined 26 sacks in 2019-20 before a back injury limited him to one regular-season game and one playoff game last year. Smith agreed to a three-year, $42 million deal with the Minnesota Vikings on Tuesday.