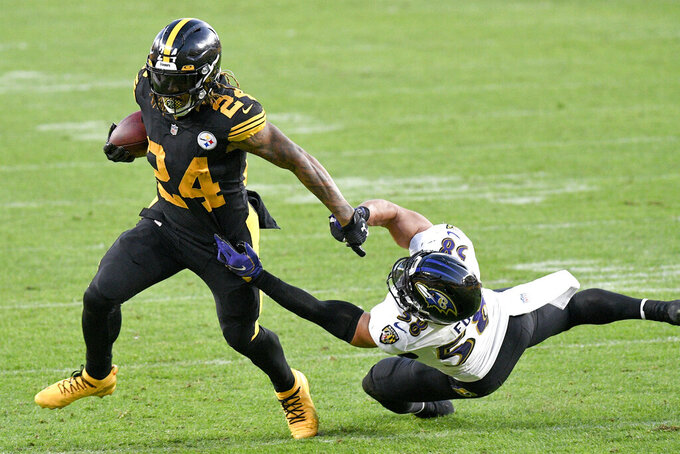 PITTSBURGH (AP) — Bud Dupree slammed the turf in anger, well aware of what the pain in his right knee meant.

One bad step in the fourth quarter against Baltimore on Wednesday put an end to the Pittsburgh Steelers linebacker's season. Maybe his time with the only franchise he's played for too.

While coach Mike Tomlin was quick to point out his team was “stinking it up well before (Dupree) went down," the sight of the relentlessly upbeat Dupree limping to the locker room cast a pall over a sideline already struggling to find the sufficient emotional energy needed to put away the undermanned Ravens.

Pittsburgh eventually slogged its way to a 19-14 win to improve to 11-0, a victory that felt very much like the opposite. Tomlin initially ripped his team for a “junior varsity” level performance. And while he struck a more conciliatory tone on Thursday, the Steelers seem to be riding on dual tracks.

On one, the weeks pass and their record remains perfect. On the other, each game seems to highlight an imperfection that could bring a potentially historic season to a screeching halt.

The Ravens, minus nearly a dozen starters because of COVID-19 protocols, attacked Pittsburgh's offense by pressing up on the wide receivers in an effort to disrupt quarterback Ben Roethlisberger's timing. The approach contributed to a handful of drops and limited the Steelers to their lowest scoring output of the season.

Even though Baltimore backup quarterback Robert Griffin III posed no threat while passing, the Ravens still managed 128 yards rushing and converted two third-and-longs on the ground against a defense that whiffed at crucial times, including a badly missed tackle by safety Terrell Edmunds that sprung Baltimore wide receiver Marquise Brown for a 70-yard touchdown that drew Baltimore within five late in the fourth quarter.

Yet as his anger ebbed, Tomlin tried to take a big-picture view. His team has absorbed whatever 2020 has thrown at it, be it scheduling chaos, season-ending injuries to prominent starters such as inside linebacker Devin Bush or last-second COVID-19 results that force Tomlin to adjust the lineups just hours before kickoff.

Now, it's time to see if rookie Alex Highsmith can fill in for Dupree in the same way that Robert Spillane did when Bush went down in mid-October. The Steelers viewed Highsmith, who played as a defensive end in college at Charlotte, as a longish-term project when they selected him in the third round. With Dupree now down for the year and with free agency looming in March, the future has suddenly become the present for Highsmith.

The end result. That's pretty much it. While Tomlin and his players refused to place the blame for their lackluster effort against the Ravens on the COVID-19 delays that pushed kickoff back from Thanksgiving night to nearly a week later, Pittsburgh looked very much like a team that felt off-kilter.

The special teams were a bright spot during the first two months of the season. Not so much lately. Ray-Ray McCloud's fumbled punt set up Baltimore's first touchdown and allowed the Ravens to briefly take the lead. Kicker Chris Boswell has missed three extra-point attempts and a field goal over the past four weeks after missing just one kick — an extra point — through Pittsburgh's first seven games.

Wide receiver James Washington can sometimes get lost in the shuffle among a deep group of targets at Roethlisberger's disposal. Still, he showed why the team remains high on him when he fought off three defenders to come up with a third-down heave in the final minutes for a 16-yard gain that helped the Steelers run out the clock.

Given the spectacular start to his career, the standard rookie wide receiver Chase Claypool set for himself has now become remarkably high. There was a minor setback against the Ravens. He failed to haul in a deep pass from Roethlisberger on Pittsburgh's first drive and later dropped a pass in the red zone. Still, he drew a 36-yard pass interference penalty on Baltimore's Marlon Humphrey, something that's happening regularly as opposing defenses try to slow him down.

Cornerback Steven Nelson underwent an MRI on his knee. Tomlin offered no timeline on the return of center Maurkice Pouncey and running back James Conner, both of whom are on the reserve/COVID-19 list.

68. The number of consecutive games in which the Steelers have had at least one sack. They can tie the NFL record of 69 straight games with a sack set by the Tampa Bay Buccaneers between 1999-2003 against Washington (4-7).

Pittsburgh can clinch its first playoff berth since 2017 with a win on Monday. The Steelers could also lock up the AFC North with a win combined with a loss by Cleveland and other results elsewhere that would give Pittsburgh the strength of schedule tiebreaker over the Browns.