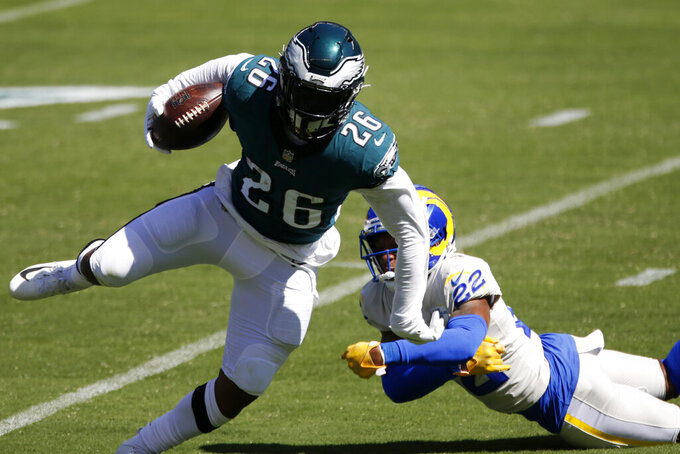 PHILADELPHIA (AP) — The Philadelphia Eagles are dealing with adversity far earlier than usual. The Cincinnati Bengals are right where they’ve been for a while.

One of the teams should earn their first win Sunday — unless they tie — when the Bengals visit the Eagles.

An 0-2 start for the first time in five years with a difficult schedule upcoming has Philadelphia in a desperate spot in September. They’ve been in dire positions the past two Decembers and ended up in the playoffs.

“I think adversity hits in many different ways,” Eagles coach Doug Pederson said. “It’s just a matter of how all the guys respond, how the coaches respond. And I think from a coaching standpoint, we’ve got to react positively to everything and get the guys going.”

The Bengals are looking to avoid their third 0-3 start in four years. They haven’t had a winning season since 2015.

“Everybody’s itching for the first win, and it’s time to get that win,” rookie quarterback Joe Burrow said. “Everybody feels it in the building. There’s some urgency.”

The Bengals finished last against the run in 2019, allowing 149 yards per game. They overhauled the defense with an eye on stopping the run, but have been even worse in the first two games. The Chargers ran for 155 yards in an opening 16-13 win, and the Browns piled up 215 on the ground, putting it away with a fourth-quarter touchdown drive that consisted of all runs. They’ve been missing tackle Geno Atkins, sidelined both games with a shoulder injury, but it’s much more than just the line. There have been missed tackles all around that turned short gains into long runs.

“We’ve struggled to stop the run, so you don’t get that many attempts to get after the quarterback,” end Carl Lawson said. “Missed tackling is a big thing.”

Eagles quarterback Carson Wentz has struggled, tossing multiple picks in consecutive games for the first time in his career. Play-calling, inexperienced receivers and blocking in Week 1 have contributed to his inconsistency. But Pederson was critical of his franchise quarterback and fickle fans have piled on in Philadelphia.

Both teams have been plagued by injuries on the offensive line. For Cincinnati, Jonah Williams started at left tackle after missing his rookie season with a shoulder injury and has struggled at times. Right guard Xavier Su’a-Filo went on injured reserve after suffering an ankle injury in the opener. The lack of cohesion has left Burrow under steady pressure and left little room for Joe Mixon to run. Against the Browns, he was limited to 46 yards on 16 carries.

“We want to be more efficient in the run,” center Trey Hopkins said. “The way our games have gone, we’ve not always been in position to run the ball in some instances. In some instances we weren’t very efficient at all. We weren’t good enough. We weren’t playing up to our standards.”

This is the Bengals’ first game outside Ohio. They lost at home to the Chargers with no fans in Week 1 and lost at Cleveland — 250 miles north — in front of 6,000 fans last Thursday.

“It’s certainly not the same as going on the road and having trouble with your communications,” Bengals coach Zac Taylor said. “I think that’s the biggest thing of going on the road, having to work with silent cadence and all the communication stuff that comes with it. Obviously that’s not really an issue when you’re playing in an empty stadium or with 6,000 people.”

Burrow hasn’t connected on many longer passes — he was 0-for-5 on deep throws in Week 1 — and that’s a point of emphasis for the Bengals. Both the Chargers and Browns played deep coverage to try to make Burrow throw a lot of short stuff, which he did very well.

Wentz hit Jalen Reagor on a 55-yard play in Week 1, but didn’t throw long last week. Reagor is out several weeks with a thumb injury.