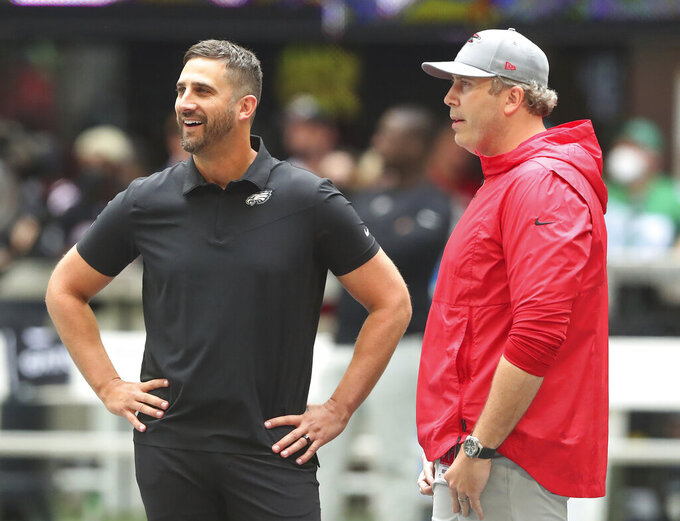 First-time head coaches, Atlanta Falcons' Arthur Smith, right, and Philadelphia Eagles' Nick Sirianni, left, greet each other at midfield as the two prepare to face off in the first NFL football game of their head coaching careers, Sunday, Sept. 12, 2021, in Atlanta. (Curtis Compton/Atlanta Journal-Constitution via AP)

Fresh off a convincing win in his NFL coaching debut, Nick Sirianni rocked a “Dawg Mentality” T-shirt to his video conference Monday and reminded everyone not to get carried away with one game.

The Philadelphia Eagles dominated the Atlanta Falcons in 32-6 victory Sunday and will host the 49ers this week. San Francisco won its opener at Detroit.

“We’ve been talking about dog mentality over and over again,” Sirianni said. “It’s a week- to-week thing, a day-to-day thing. If I think about on Wednesday when we come back out here how well I played in the Atlanta game, then I’m gonna get my butt kicked this upcoming Sunday, so it’s living in the moment of what you are in.

“We literally live in the moment of how are we going to leave this building today better than we were yesterday. If you’re thinking about the past or have a big ego based on how you played, you won’t do that.”

Sirianni and Jalen Hurts aced their first tests, earning plenty of praise. They know that’ll quickly turn to criticism when the team goes through adversity and losses pile up.

“In all honesty, we won one game. We gotta go out there and do it again,” Sirianni said.

Coming off a 4-11-1 season that led to Super Bowl-winning Doug Pederson getting fired and franchise quarterback Carson Wentz being traded, the Eagles didn’t have high expectations. After one game, they’re the only team in the NFC East with a victory. It’s a long season, the longest ever as the NFL plays a 17-game schedule.

“All the hard work we put in, all the different changes we’ve endured, we’ve had to overcome and persevere with new coaching, new values as a football team, and buying into it,” Hurts said. “Coming out here we won, and started off the right way. I think that’s good.”

The offense was balanced, featuring short and midrange passes and run-pass options. Hurts got in a rhythm early, made smart decisions and used his legs for positive gains when needed. Sirianni’s play calling catered to his young QB’s strengths.

The Eagles must be more disciplined. They committed 14 penalties, including seven by the offensive line. They got away with it against the Falcons, who had 12 penalties.

Wide receiver Jalen Reagor caught all six passes thrown for 49 yards, including a 23-yard catch-and-run TD. The 2020 first-round pick had a disappointing, injury-riddled rookie season. But he displayed the skills that made him the 21st overall pick, one ahead of Justin Jefferson.

Right tackle Lane Johnson had three penalties for the first time since Dec. 25, 2017. The three-time Pro Bowl picked played only seven games last season because of an ankle injury.

Safety Marcus Epps left in the first half with a concussion. He’s in protocol. ... Tight end Zach Ertz was sidelined with a hamstring injury. ... Wide receiver J.J. Arcega-Whiteside sustained an ankle injury and is day to day.

1 — Hurts was sacked once after the Eagles allowed a league-high 65 last year mostly due to an injury-ravaged offensive line that featured 14 different combinations.