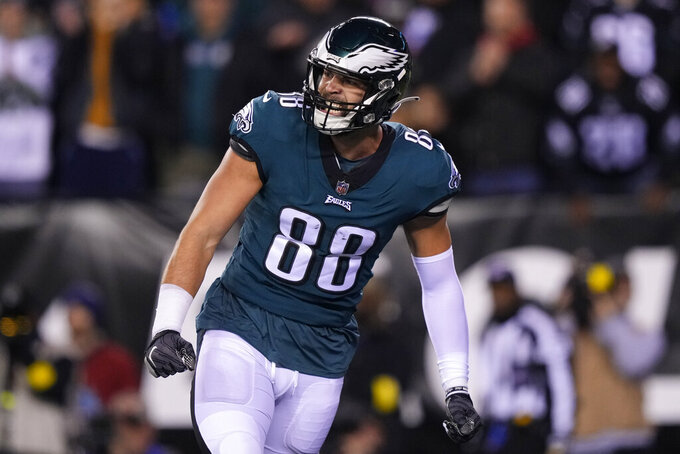 Philadelphia Eagles tight end Dallas Goedert (88) celebrates a touchdown against the Washington Commanders during the first half of an NFL football game, Monday, Nov. 14, 2022, in Philadelphia. (AP Photo/Matt Slocum)

Goedert was injured in Philadelphia's 32-21 loss to the Washington Commanders on Monday night. The 27-year-old Goedert has 43 receptions for 544 yards and three touchdowns. Goedert will miss at least the Eagles' next four games, starting Sunday at Indianapolis. He can return in Week 15 against Chicago.

The Eagles started 8-0 for the first time in franchise history before they lost to the Commanders.

“That stinks for us as a team, stinks for Dallas,” coach Nick Sirianni said Wednesday. “So how do we replace him? You can’t, right? You have to do it by committee. You have tight ends that are there that we have a lot of faith in in this building; it’ll start with them.”

“Super bummed about Dallas because of how important he is to the football team and the offense, but excited for those guys to get an opportunity to do a little bit more,” Sirianni said.

The Eagles also placed defensive tackle Marlon Tuipulotu on IR, which opened the door to sign Joseph. The 34-year-old was a second-round pick by the New York Giants in 2010. A two-time Pro Bowl pick, Joseph has 25 career sacks in 162 games.

“There have been a lot of guys who have had experience with him, and we think he’s the right type of guy for the locker room,” Sirianni said. “We think he’s still a heck of a football player and he’s going to be able to help us.”