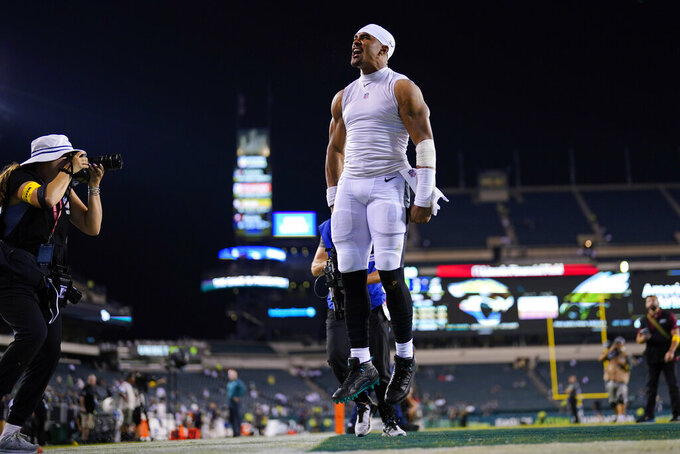 Philadelphia Eagles quarterback Jalen Hurts celebrates as he walks off the field after an NFL football game against the Minnesota Vikings, Monday, Sept. 19, 2022, in Philadelphia. The Eagles won 24-7. (AP Photo/Matt Slocum)

PHILADELPHIA (AP) — Darius Slay had no idea James Harden was rooting on the Eagles from a seat near the sideline until he saw the Philadelphia 76ers star on the big screen.

So what did Slay do? The Philadelphia Eagles cornerback ran over to Harden and gifted him the first ball of his two interceptions against Minnesota. Harden even stuck around after the game and had Slay autograph the ball — not a bad souvenir from another Eagles’ win at the Linc.

Slay, though, had his star-struck choice of celebrities to choose from.

Phillies slugger Bryce Harper (wearing an Eagles hat) was in the house. So was Questlove and noted Eagles fan — both in real life and fiction — actor Bradley Cooper (in an Allen Iverson T-shirt).

Turned out the biggest star of ’em all on Monday night was behind center.

Jalen Hurts used a nationally televised audience to play the breakout — and often breathtaking — game of his young career.

Hurts entered the season still facing doubts that he was not just a quarterback but THE franchise QB for the Eagles — remember, he was picked in the second round of the 2020 draft simply to serve as a backup — but he erased them with authority in winning his first two starts.

Hurts was flawless on the opening drive and made few mistakes along the way in leading the Eagles to a 24-7 win over the Vikings on Monday night.

His first half when he had 301 total yards and three touchdowns drew instant comparisons to Michael Vick’s epic six-touchdown performance in a 2010 Monday night win at Washington.

The 24-year-old Hurts finished with 333 yards passing, 57 yards rushing, two rushing touchdowns, one passing and he showed that, sure, it’s early, but maybe Harper and Harden won’t be the only league MVPs in the city by the time the Super Bowl rolls around.

Hurts had his fifth multiple-rushing TD game since the start of last season.

“I wouldn’t say I’m surprised. I’ve seen the growth,” Eagles coach Nick Sirianni said. “We talk about this so much with Jalen. Why is he going to continue to reach his ceiling? Because he’s tough, he has high football character, and he loves football. He’s going to reach his ceiling. It’s fun watching him grow.”

Hurts and the offense. Yes, Hurts gets the bulk of the credit as the Eagles are just one of six 2-0 teams in the NFL. But offensive coordinator Shane Steichen has called the right plays that make the Eagles seem electrifying at times. For all the love shown toward the Eagles talented trio of wide receivers — A.J. Brown, Quez Watkins and DeVonta Smith — it was tight end Dallas Goedert that led the team in yards receiving with 82 (on five catches). Miles Sanders rushed for 80 yards in a second straight productive week out of the backfield.

Big Play Slay! When he’s not coming up with nicknames for his teammates or rubbing elbows with Harden or proving to be one of the most quotable Eagles, Slay has lived up to his nickname as the cornerback making all the big plays.

Slay had two interceptions and shut down Vikings standout wide receiver Justin Jefferson. Jefferson was limited to just six receptions on 12 targets for 48 yards. Slay broke up a total of five passes.

“I am still at an elite level. I deserve a lot of respect,” Slay said. “I think the league respects me enough.”

Hard to find fault with anything the Eagles did in a complete game against the Vikings.

Brown put a temporary scare into Eagles fans when he made a quick trip to the medical tent. No injury, though. The Eagles No. 1 receiver just needed a bathroom break.

2: The Eagles had only two sacks of Kirk Cousins. The number is cushioned somewhat by a defense that pressured him all game and forced him into throwing for only 98 yards and three interceptions in the second half.

Hey, don’t I know you? The Eagles start a reunion tour Sunday when they head out to play the Washington Commanders and former QB Carson Wentz. The Eagles return home Sunday, Oct. 2 and play the Jacksonville Jaguars, led by coach Doug Pederson. Wentz and Pederson, of course, played pivotal roles in helping the Eagles win the Super Bowl after the 2017 season.