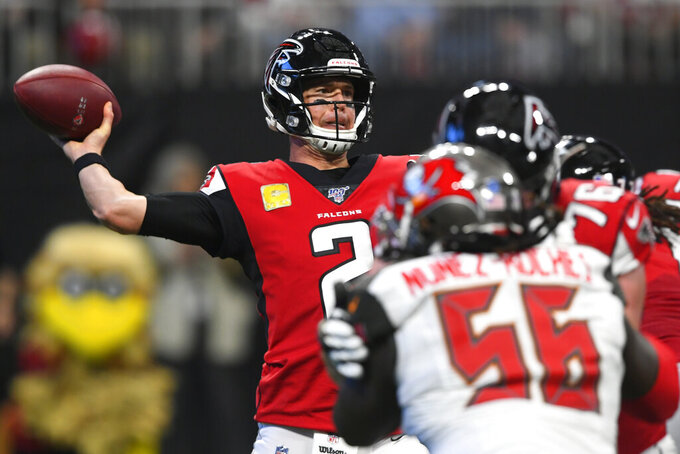 Atlanta Falcons quarterback Matt Ryan (2) works in the pocket against the Tampa Bay Buccaneers during the first half of an NFL football game, Sunday, Nov. 24, 2019, in Atlanta. (AP Photo/John Amis) 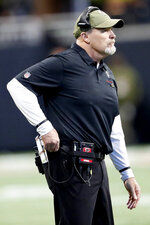 ATLANTA (AP) — The Atlanta Falcons fell flat in their chance to add to momentum gained by two straight wins away from home.

Any momentum gained from road wins at New Orleans and Carolina couldn’t help the Falcons in Sunday’s 35-22 loss to Tampa Bay.

The Falcons (3-8) were doomed by their slow start in the battle for last place in the NFC South. Atlanta managed only one field goal after having the ball in Tampa Bay territory in each of its first two possessions.

“We had our chances early in that game to make it a different type game and we weren't able to do that,” said quarterback Matt Ryan.

The modest two-game winning streak took some pressure off Atlanta coach Dan Quinn. A win over Tampa Bay might have helped Quinn show he had corrected mistakes that had led to a 1-7 start.

Instead, the missed early opportunities served to derail impetus for Quinn and his Falcons.

“We had an opportunity to start strong and play the complementary football that we've done over the last few weeks, but we didn't have any success doing that today,” Quinn said. “So it didn't carry over.”

Younghoe Koo’s first field goal came after the Falcons had a first down at the Tampa Bay 7. Desmond Trufant’s interception of Jameis Winston set up another excellent opportunity that stalled at the Buccaneers 35. The Falcons lined up for a fourth-down play from the 35, when they were still in field-goal range, but an offside call on tight end Jaeden Graham forced a punt.

Later, when the Falcons were playing from behind, they had to settle for field goals by Koo on two consecutive 13-play drives. That wasn’t enough to keep up with Winston and the Buccaneers.

“In this league, you have to capitalize on your opportunities,” Ryan said. “We didn't do a good enough job of that today.”

Ryan was sacked six times, a season high, and took an additional 12 hits. He recovered his own fumble when sacked by Shaquil Barrett in the second quarter. He fumbled again when sacked by Jason Pierre-Paul in the fourth quarter. This time, Tampa Bay’s Ndamukong Suh recovered and scored on a 6-yard return.

The lack of adequate protection already has forced Ryan to miss one game with an ankle injury, ending his 10-year streak of not missing a game. He missed practice time last week while still recovering from the injury.

Ryan said he expects to be sore on Monday but has no doubt he’ll be ready for Thursday night’s home game against New Orleans.

Falcons wide receiver Julio Jones left with a shoulder injury early in the second half. He drew compliments from teammates by returning to the game.

Ryan wouldn’t place blame for the loss on the offensive line.

“All of us across the board need to do a better job,” he said.

The Falcons defense certainly shared blame as it lost momentum gained from 11 sacks in the road wins the previous two weeks. Atlanta had no sacks, returning to the form it showed when it had only seven sacks through its first eight games.

No one in the Falcons locker room had a quick answer for the disappearing act by the pass rush.

Added Jarrett: “We've got to be able to throw whatever we need to out there to try to get pressure. Nobody is going to give it to you. I can't give you a magic answer.”