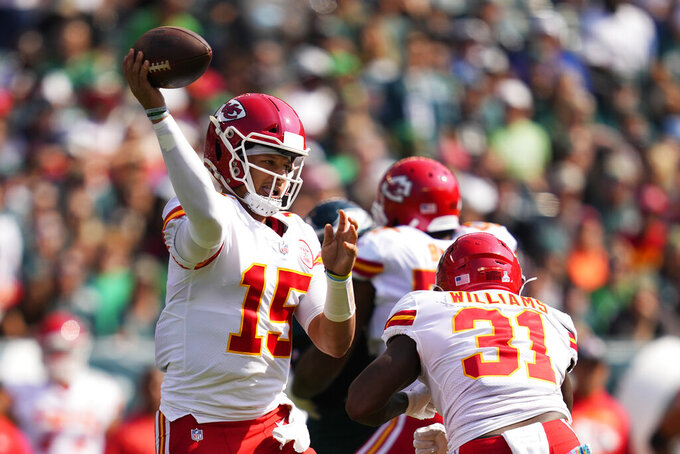 Kansas City Chiefs quarterback Patrick Mahomes (15) looks to pass during the first half of an NFL football game against the Philadelphia Eagles on Sunday, Oct. 3, 2021, in Philadelphia. (AP Photo/Matt Slocum)

KANSAS CITY, Mo. (AP) — Clyde Edwards-Helaire joked after the Chiefs ended a two-game skid in Philadelphia on Sunday that everyone in Kansas City probably wanted to “set me on fire” after a fumble against the Ravens cost them an opportunity at a winning field goal.

Two weeks later, there would be a bucket brigade ready to douse him at the first sign of flames.

Edwards-Helaire responded to his gaffe by running for 100 yards the following week against the Chargers, then had 102 on just 14 carries in the 42-30 victory over the Eagles. He also caught a nifty underhand pass from Patrick Mahomes on Kansas City's first offensive drive for his second touchdown reception in as many weeks.

“We want to be able to mix it up, one or the other, and sometimes both,” said Chiefs coach Andy Reid, who also snagged his 100th win with the club.

"I’m not big on trends. Once you have trends, these other guys are pretty good that you’re playing, and they knock you out of the ballpark. We want to be able to do both and do it when we want to do it.”

That's the thing: Edwards-Helaire's success behind a young offensive line has helped Mahomes, too. He threw five touchdown passes against the Eagles, including that one to his running back.

And given the continued struggles of the Kansas City defense, the Chiefs might need to outscore a lot of teams this season.

“I feel like we're still missing a step,” said Tyreek Hill, who had 11 catches for 183 yards and three scores Sunday. “There's always things to correct; I don't care if you put up 50 points, there's always one little thing in a play to be corrected, whether that's myself, whether it's (Travis) Kelce, whether it's Patrick Mahomes. We're going to find something to correct.”

Edwards-Helaire isn't the only one having success on the ground. Darrel Williams carried 10 times for 42 yards, and the Chiefs had 200 yards rushing in all against the Eagles. They averaged nearly 6 1/2 yards per attempt.

The Chiefs pass rush continues to have problems. Defensive end Frank Clark missed another game with a hamstring injury, and his potential return would help. Mike Danna had two sacks of Jalen Hurts on Sunday, but Chris Jones went another game without getting his hands on the quarterback.

Danna, a fifth-round pick in 2020, is starting to hit his stride after a tough rookie season. He landed on injured reserve with a hamstring injury in October, then spent time on the COVID-19 list in January. But he's been the most consistent pass rusher for Kansas City through the first four weeks of the season.

Clark's inability to stay healthy has been quite literally costly for Kansas City. He's making a team-high $18.5 million in base salary, carries a team-leading $25.8 million salary cap hit and represents more than 13% of the team's total cap number. And for that, the Chiefs have so far gotten two tackles in one game this season.

Willie Gay Jr. could return from IR this week. The linebacker went on the list in early September with a toe injury and was eligible to return last week, though the Chiefs decided he wasn't quite ready.

19: That's the number that Josh Gordon is wearing with the Chiefs. The 2013 All-Pro wide receiver signed with Kansas City last week, right after the NFL reinstated him from his sixth suspension, and he spent the next few days trying to digest the Chiefs playbook. There's a chance Gordon could be ready for Sunday night's game against Buffalo.

The Chiefs face the Bills on Sunday night in a rematch of last season's AFC title game.