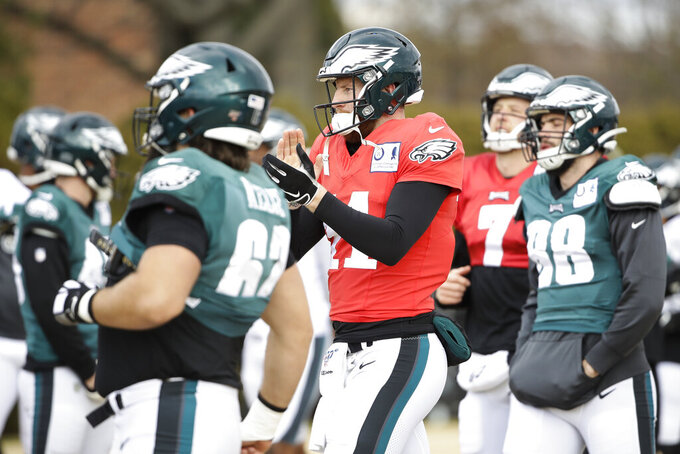 PHILADELPHIA (AP) — Eli Manning will try to resurrect his NFL career in the stadium where he made his debut 15 years ago.

The two-time Super Bowl MVP makes his first start since Week 2 when the New York Giants (2-10) visit the Philadelphia Eagles (5-7) on Monday night. Manning is filling in for injured rookie Daniel Jones, who has a high ankle sprain.

Manning turns 39 next month and will become a free agent after the season. But he isn't thinking about his future just yet.

"Just take it one game at a time," Manning said. "You never want to try to make decisions about your future while you’re still living in the present and don’t know the circumstances of what could happen. Just have to go out there and try to get a win for the Giants ... I’ll analyze everything else after the season."

Manning will never forget his first game in Philadelphia in the 2004 season opener. Terrell Owens made his debut with the Eagles, catching three touchdown passes from Donovan McNabb in a 31-17 rout. Manning entered the game in the fourth quarter, taking over for future Hall of Famer Kurt Warner.

He completed 3 of 9 passes for 66 yards but the final play of the game is etched in Manning's memory. He took a crushing hit from Jerome McDougle that caused the referees to run off the final 10 seconds on the clock.

Manning is 10-22 against the Eagles, including a pair of playoff losses. He started 232 games — all but one in 2017 — after replacing Warner for the final seven games in 2004. Coming off the bench is a new experience, one that Manning welcomes after sitting this long and watching the Giants lose eight straight games.

"I think you're always eager to play, that's why you play," Manning said. "That's why you compete, and you work out and do everything, to go out there and compete on game day and get wins and put your team in a situation to win. I think when you're not doing that you miss it, and you're excited about the competitive part of it."

The Eagles have lost three in a row, including a stunning 37-31 upset at Miami last week. They let journeyman Ryan Fitzpatrick carve up their defense so they're determined not to let Manning do it, too.

"One of Eli's strengths is how he distributes the football to multiple people, and that's something that he's been able to do throughout his career and be successful," Eagles coach Doug Pederson said. "I think it's something that Eli has probably sat and watched and observed, and he's going to use that to his advantage."

Philadelphia safety Malcolm Jenkins sees a difference in New York's offense with Manning instead of Jones.

"Jones is a little more mobile, holds the ball a little longer, and looks for those throws down the field, whereas Eli is really better when he can get the ball out of his hands quick," Jenkins said. "He knows how to read the blitzes and knows where to go with the ball."

Manning's best bet would be to turn and hand the ball to Saquon Barkley. The second-year pro ran for 231 yards and two touchdowns and caught 16 passes for 140 yards and one score in two losses against Philly last year.

"Eli, he's a legend. He's a Hall of Famer," Barkley said. "He just sees the field so well. He understands the game so well, he's been doing it for a very long time and it's what you expect from Eli. Obviously, I love the way he handled the situation when D.J. ended up being the starting quarterback, the way he operated in practice, the way he operated in the building was the same Eli that we know. So, good to see him come out this week and get a chance. It's going to be awesome for him."

While Manning and the Giants play out the schedule in a spoiler role, the Eagles control their playoff hopes. Despite a losing record, they would win the NFC East if they win their final four games.