Embracing road warrior mentality why Titans go to KC next 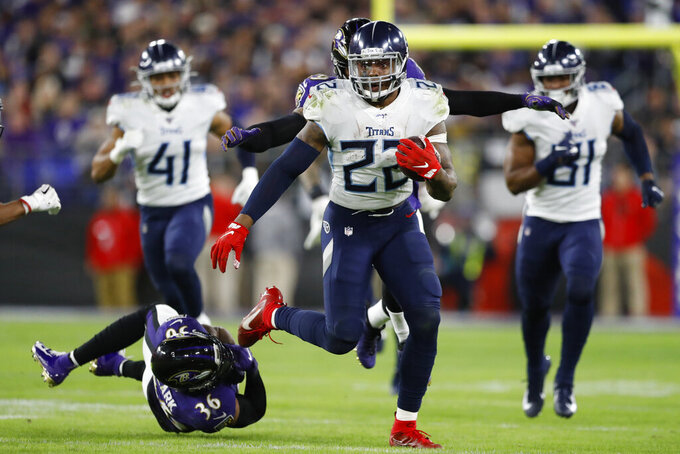 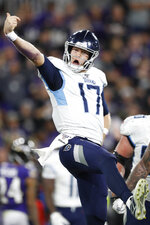 NASHVILLE, Tenn. (AP) — Tennessee coach Mike Vrabel made it clear before flying to Houston needing to win their regular-season finale that the Titans would have to be road warriors to keep this season alive.

They've done just that, winning three straight, with each win bigger than the last, to reach the franchise's first AFC championship game since the 2002 season. Their formula is simple: The Titans dominate with the NFL's rushing leader running like no one in league history, and with a stingy defense.

“It was an easy path," Vrabel said Monday. “They didn't have to worry about if we were going to be home or anything else.”

That said, the Titans (11-7) have taken a challenging path in trying to become the first sixth seed to reach a Super Bowl since the Green Bay Packers in 2010. They knocked off the defending Super Bowl champion in New England and followed up by stunning the team with the NFL's best record in Baltimore 28-12.

Now they have to go to Kansas City, the No. 2 seed with the 2018 NFL MVP in Patrick Mahomes on Sunday in the franchise's third AFC championship game since moving to Tennessee, and fifth all time. The Titans are 7-3 on the road counting both the regular season and playoffs.

“We knew our situation started in Houston and our playoffs started then. We had to win,” center Ben Jones said. “All we can focus on is this week. So this is a big one for us, and we just got to take care of this week.”

Derrick Henry, aka El Tractorcito, was impressive in the regular season, leading the league with 1,540 yards rushing. Now Henry and the Titans are making NFL history and punishing defenses.

Nobody had ever run for at least 180 yards in three consecutive games before Henry. He has strung together games with 211 yards in the regular-season finale at Houston and followed that by setting the franchise postseason rushing record with 182 yards against New England, then 195 against Baltimore, which had been the NFL's fifth-best rushing defense.

The Titans set a postseason record with 217 yards rushing in Baltimore, having topped 200 yards in each playoff game. The offensive plan might be tweaked against the Chiefs, but the recipe is simply keep giving Henry the ball. He'll even throw a touchdown pass if needed.

“He's an amazing player, and we knew he had it in him," Jones said of Henry. “Our thing is just don't let it end now.”

This really feels like nitpicking here with the Titans coming off big wins. But at some point the Titans will have to throw for more than 83 yards to win in the playoffs. That said, Ryan Tannehill does have three TD passes, and he has been sacked only twice with one interception. He also has used his legs, running for a touchdown against the Ravens.

Four-time Pro Bowl defensive lineman Jurrell Casey turned in simply his best game yet with his first two postseason sacks against Baltimore, including a forced fumble. He also had a tackle for loss with two quarterback hits and four tackles. Now one of the defensive captains, the nine-year veteran will be playing in his first AFC championship game.

The Titans brought Darius Jennings back in late December after he averaged an NFL-best 31.7 yards on kickoff returns in 2018 for Tennessee, a franchise record. But he is averaging only 20 yards this postseason with a long of 22. The Titans had an average start at their 20 on three kickoffs in the divisional win.

Starting linebacker Jayon Brown's shoulder kept him out of the divisional game. Wide receiver Adam Humphries has missed six straight with an ankle, but Tennessee hasn't missed him through this stretch.

0 — The number of field goals Greg Joseph, the Titans' fourth kicker of the season, has attempted in his four games since being signed.

Win another playoff game in Kansas City and advance to the Super Bowl for the first time since the 1999 season.