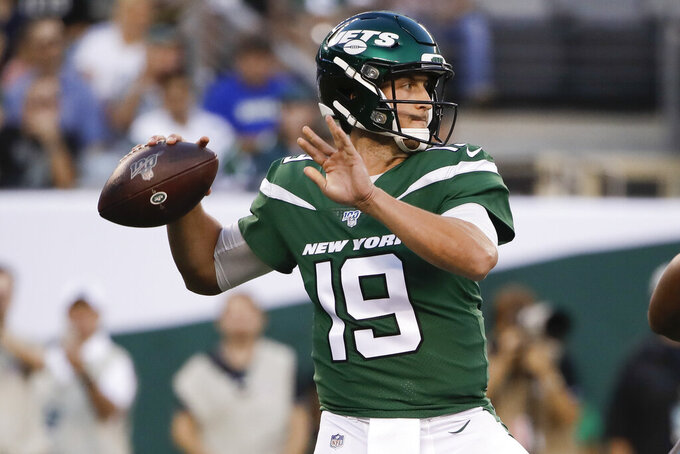 FILE - In this Aug. 29, 2019 file photo, New York Jets' Trevor Siemian (19) throws a pass during the first half of a preseason NFL football game against the Philadelphia Eagles in East Rutherford, N.J. While starting quarterback Sam Darnold recovers from mononucleosis, it will be Siemian's show as the New York Jets take on Baker Mayfield and the Cleveland Browns on Monday night, Sept. 16. (AP Photo/Matt Rourke, File)

It was Adam Gase calling, and the New York Jets' backup quarterback realized he might now suddenly be the starter — for this week, and likely several more as Sam Darnold recovers from mononucleosis.

"He said they were trying to figure out what was going on with Sam," Siemian recalled, "but to be ready."

Well, ready or not, it's Siemian's show as the Jets (0-1) take on Baker Mayfield and the Cleveland Browns (0-1) on Monday night.

"Just do my job," Siemian said of his mindset. "Run a clean operation and get the ball in the end zone. It's pretty simple."

The prime-time matchup was being billed as the first of perhaps many showdowns between Mayfield and Darnold, the No. 1 and No. 3 picks in the NFL draft last year, as starters. Mayfield came on in relief of an injured Tyrod Taylor last year in his debut in a Thursday night game, rallying the Browns to a 21-17 win that snapped their 19-game winless string.

"Trevor Siemian is a quality quarterback in the National Football League," Browns defensive coordinator Steve Wilks said. "I've competed against him before, coached against him, so he's more than capable of stepping in and making things happen for the Jets."

Siemian's 59.3 career completion percentage is mediocre, at best, but Gase didn't anticipate needing to change much of the offensive game plan in Darnold's absence.

"You know, just being with him since we started in the spring, the way he's practiced, the way he's prepared, just kind of the way he is, nothing really bothers him," Gase said. "He has a good way about him, he was the perfect guy for Sam, we felt like, and he's held true to that."

The 27-year-old Siemian was signed by the Jets to a one-year, $2 million deal in March after he spent last season in Minnesota as Kirk Cousins' backup.

"I have a tremendous amount of confidence in Trevor," Jets offensive coordinator and quarterbacks coach Dowell Loggains said. "I expect him to go out and execute the offense well. He's a smart guy, he's been a starter that has a winning record. It's hard to find experience in this league in the backup quarterback position and we are very fortunate that way."

Siemian is used to dealing with pressure and adversity. He was drafted in the seventh round — No. 250 overall — in 2015 out of Northwestern, the seventh and final quarterback selected that year.

As a rookie with the Broncos, Siemian soaked up everything he could while sitting behind Peyton Manning and Brock Osweiler on the depth chart as Denver beat Carolina to win the Super Bowl.

Then Manning retired. And, Osweiler signed a big free agent deal with Houston.

That left Siemian to compete in training camp with the likes of Mark Sanchez and Paxton Lynch — and he won the starting job. The next season, he opened as the starter, lost the job, regained it and then hurt a shoulder and was placed on season-ending injured reserve. He was traded to the Vikings that offseason.

"I've played, so I guess the sense that I've been there and I've done it a little bit," Siemian said. "It's been a while, so it will be, like I said, I'm chomping at the bit to compete, be out there with the guys. I'll just say I feel comfortable."

Gase was Chicago's offensive coordinator when he and the Bears worked out Siemian when the quarterback was coming out of college. Siemian was still recovering from a torn anterior cruciate ligament in his left knee that ended his senior season and hindered his mobility in workouts leading up to the draft.

After Gase took over as Miami's coach in 2016, he watched a lot of film of opponents who also played Denver — and saw a healthy Siemian starting and playing well for the Broncos.

"In my head, I kept saying, 'Wow, this guy really throws a nice ball, he gets it out and it comes out clean,'" Gase said. "It just seemed like the more film I watched on him and then when we started evaluating him, I really liked him."

That all led to Gase jumping at the chance to bring Siemian to New York as Darnold's backup.

Now, he gets a chance to lift the Jets — and their fans — out of early season despair and try to help save the season in Darnold's absence.

"He's not a panic guy," Gase said. "He's got a coolness about him, and when things change at that position sometimes other guys can panic a little.

"But when you have a guy that is really calm and steady, then that calms everybody else down."