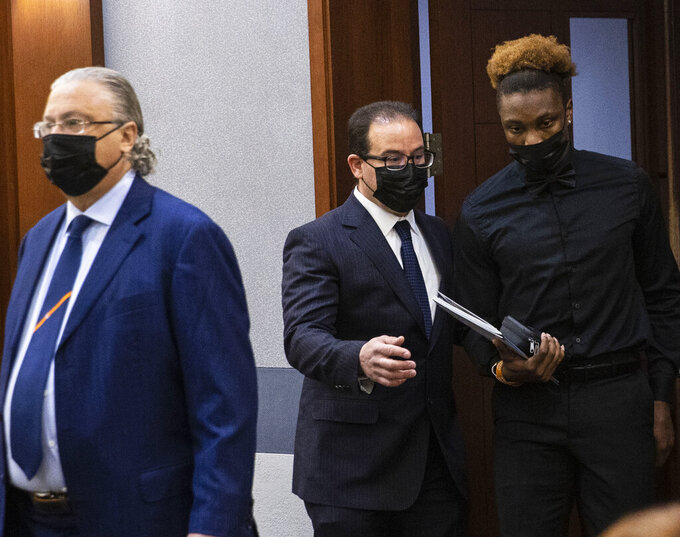 LAS VEGAS (AP) — Former Raiders wide receiver Henry Ruggs III received a stern talking-to from a Las Vegas judge but was allowed to remain on house arrest with a continuous alcohol monitor on one ankle and a GPS monitor on the other following a fatal crash he’s accused of causing by driving drunk.

Justice of the Peace Suzan Baucum told Ruggs and his lawyers she was “comfortable with a higher level of monitoring” after a hearing about a delay in Ruggs providing a remote breath-alcohol test with a hand-held device on Nov. 13.

Attorneys David Chesnoff and Richard Schonfeld said their client took a test anyway “out of an abundance of caution” on Nov. 13 and met a three-hour requirement by submitting the negative test.

“Henry still did the right thing by testing within the window,” Chesnoff said, standing with Ruggs before the judge. “He should not be punished because his case attracts so much attention.”

Since his Nov. 3 release from jail on $150,000 bail, Ruggs has passed more than 77 breath-alcohol tests, his lawyer told the judge.

Ruggs’ lawyers also submitted testimonials from two people who said they were with Ruggs when he missed the call Nov. 13, and didn’t hear a signal from the monitor.

Las Vegas police still have Ruggs’ cellphone, Chesnoff said, and he has now provided a new phone number to the monitoring system, SCRAM of Nevada.

The hand-held device emitted a signal while Ruggs stood before the judge, requiring Ruggs to submit a breath test after his court hearing.

Police and prosecutors say Ruggs, 22, and his girlfriend, Kiara Je’nai Kilgo-Washington, were injured in the pre-dawn Nov. 2 crash, when Ruggs’ Chevrolet Corvette slammed into the rear of a Toyota Rav4 that caught fire.

Chesnoff didn’t specify Ruggs’ injuries, but told the judge that a leg cast that initially prevented the use of the ankle monitor has been removed.

Chesnoff and Schonfeld are fighting separately to block prosecutors from accessing Ruggs’ medical records, and an attorney for Kilgo-Washington has launched a similar effort on her behalf. A Dec. 8 hearing is scheduled on that question.

Prosecutors say Ruggs’ blood-alcohol level was 0.16% — twice the legal limit for drivers in Nevada — and his vehicle hit speeds of 156 mph (251 kph) before the crash.

Ruggs is due for a Dec. 16 evidence hearing on two felony driving under the influence charges that each carry mandatory prison time of two to 20 years if he’s convicted, plus felony reckless driving and a misdemeanor weapon charge. Police say they found a loaded handgun in his wrecked sports car.

The Raiders released Ruggs just hours after the crash.

The team made Ruggs their first pick in the 2020 NFL draft, from Alabama, and he had been an emerging star for the Raiders this season.