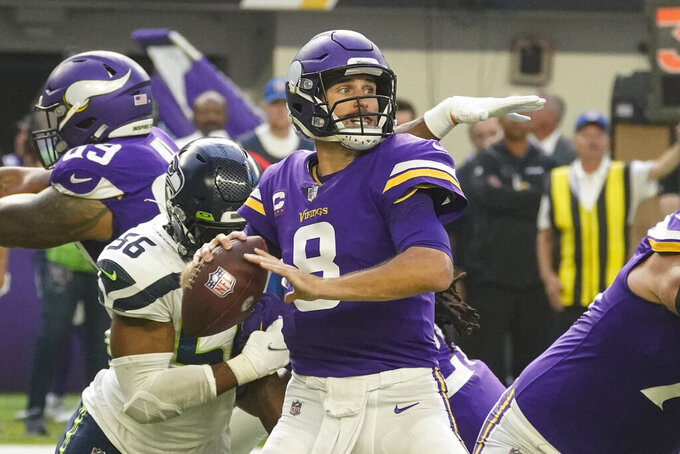 MINNEAPOLIS (AP) — Kirk Cousins and the Minnesota Vikings have taken a while to find comfort with each other.

The high expectation that comes with his huge contract, an uneven first three seasons with the team and intermittent skittishness during pass protection breakdowns have been contributing factors. His decision to remain unvaccinated for COVID-19 did not help.

Lately, though, Cousins has sure made some strides. Teammates have praised an increased willingness to loosen and open up. The quarterback has been meeting head coach Mike Zimmer for weekly strategy sessions, putting two of the organization’s most vital employees in a better sync.

Whether or not there's a direct correlation to the field, well, all that matters to the Vikings is his early-season performance is by far the best of his career. Cousins has no turnovers, eight touchdowns and ranks fourth in the league with a 118.3 passer rating.

“He’s just no fear. He’s not worried about anything other than going out there and doing his job,” wide receiver Adam Thielen said.

Maybe more than that, even.

“He has a little more swag to him,” running back Alexander Mattison said, adding: “He’s definitely opened up a little bit, and it’s awesome to see.”

After a rocky training camp marked by Zimmer's exasperation with the vaccine holdouts including Cousins and several other prominent players, the 10th-year NFL veteran has followed the tried-and-true formula for muting criticism and controversy in sports: playing well.

He had a major hand in helping the Vikings (1-2) rebound from consecutive narrow losses with a commanding 30-17 victory last week against longtime nemesis Seattle.

As for that noticeable spike in swagger he's shown around team headquarters? Cousins credited his first NFL offensive coordinator, current San Francisco head coach Kyle Shanahan, for the assessment in 2012 when a Washington teammate teased the rookie Cousins for his huge Halloween-costume-like jersey and other fashion faux pas.

Cousins has tried to downplay whatever improvement he's made as a team leader. It's clear, however, his new cubicle placement next to defensive leaders Anthony Barr, Eric Kendricks and Harrison Smith and, especially, star wide receiver Justin Jefferson has had energizing effect.

“He’s just trying to see what a 22-year-old mind is, I guess,” Jefferson said. “We’re always talking and seeing different things that he likes and I like.”

Usually understated running back Dalvin Cook was beaming Wednesday as he giddily described his view of this more demonstrative version of Cousins. Then he tightened up his smile and shifted to a more serious tone.

Cousins and the Vikings will have their hands full Sunday when they host Cleveland, a talent-rich group with as much swagger as any team in the league — from quarterback Baker Mayfield to wide receiver Odell Beckham Jr. to defensive end Myles Garrett.

The Browns (2-1) are ninth in the league in scoring — the Vikings are eighth — and have scored 26-plus points in each of their first three games for the first time since the 1964 championship season. They're directed, of course, by Kevin Stefanski, who left Minnesota in 2020 after 14 years as a Vikings assistant to become Cleveland's head coach.

“This is probably the most balanced team in the NFL,” Vikings cornerback Patrick Peterson said.

Mayfield has not been quite as productive as Cousins, but he's been more than happy to hand off to the a dangerous tandem of running backs in Nick Chubb and Kareem Hunt.

On many teams, Hunt would be the primary ball carrier. On the Browns, he’s the primary backup. His unique skill set still makes him a valuable weapon.

Hunt had 155 total yards last week, his most since signing with his hometown team two years ago. That included a powerful 29-yard touchdown run during which he broke a tackle in the backfield and pushed his way past several Chicago defenders before outrunning them to the end zone in a 26-6 victory last week. Mayfield likened him to a Tasmanian devil.

“He runs like a wild man,” Chubb said. “He doesn’t care about his body at all. He just runs in there and bounces off hits. He’s a special type of player.”

The Vikings are lagging on defense, statistically at least, but they're in far better position to contend with Chubb and Hunt this year with hefty newcomers Michael Pierce and Dalvin Tomlinson at defensive tackle. Former Browns starter Sheldon Richardson rejoined the Vikings to back them up.

“Those double teams are coming on. They probably won’t come off,” Pierce said. “Thank God me and D.T., we’re built for this kind of stuff.”

Unhappy with his own performance and Cleveland’s defense over the first two games, Garrett challenged his teammates last week. They responded emphatically. Garrett set a team record with 4½ of the nine sacks of Bears rookie Justin Fields as the Browns yielded just 47 net yards, also an all-time best for the franchise.

“He’s a monster,” safety Grant Delpit said. “I love to have him on my team. Myles plays every down with a great motor, and plays come to him because of that. That’s inspirational for me."

The Vikings lead the all-time series against the Browns 12-4, with the most recent victory coming in London in 2017. Their quarterback then was Case Keenum, who's now the backup to Mayfield.