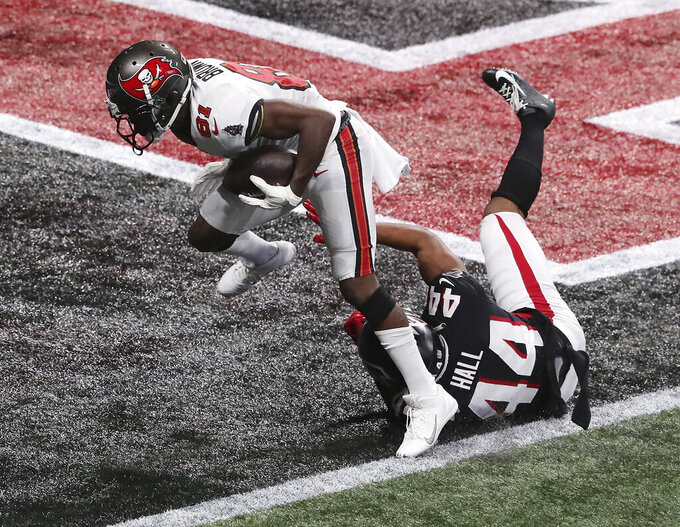 Tampa Bay Buccaneers wide receiver Antonio Brown, top, gets past Atlanta Falcons cornerback Tyler Hall for what proved to be the winning touchdown in the final minutes of an NFL football game Sunday, Dec. 20, 2020, in Atlanta. (Curtis Compton/Atlanta Journal-Constitution via AP) 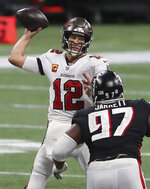 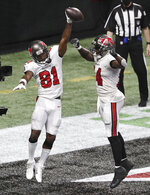 ATLANTA (AP) — Interim coach Raheem Morris knew the Falcons were in trouble as soon as he saw Tyler Hall line up against Antonio Brown.

In a one-on-one matchup that heavily favored Brown against an undrafted rookie free agent, Hall was chasing the whole way as the electric receiver burst down the left side and caught a 46-yard touchdown pass from Tom Brady.

The ball was in the air nearly the whole way as Brown turned to cradle it near the end zone. It was the biggest play of the game, coming with 6:19 remaining and ending the scoring in the Falcons’ 31-27 loss to Tampa Bay on Sunday.

“We were in man-to-man coverage and got into a stack,” Morris said. “We had a bad signal and a bad communication and then Tyler got beat on a long play. He got put in a bad matchup and got beat on the play. That’s on us.”

Hall was a late replacement for Isaiah Oliver, who left the game because of cramping and couldn’t return. Brown’s touchdown catch wiped out a Falcons lead that had stood at 17-0 at halftime and 24-7 in the third quarter.

Brady got going in the second half well before his TD pass to Brown. He led the Bucs (9-5) on five straight scoring drives — four touchdowns and one field goal — to hand the Falcons (4-10) their third straight loss.

They are two teams heading in opposite directions, Tampa Bay to a likely wild-card playoff berth and the Falcons toward hiring a new coach and general manager as Atlanta looks to rebuild in the offseason.

“I wasn’t worried about Tampa’s playoff stuff,” defensive tackle Grady Jarrett said. “It’s about us handling our business. It wasn’t on my mind about beating Brady. I wanted to beat the Bucs because they’re on our schedule. We’re just trying to get better and get some wins.”

It was a familiar theme for the Falcons, who already this season became the first team in history to blow 15-point leads in the fourth quarter — and they did it in consecutive weeks against Dallas and Chicago.

As was the case in those games, the Falcons got off to a strong start. Quarterback Matt Ryan was 28 of 36 passing for 301 yards, three TDs after connecting with Hayden Hurst on a 7-yard score that made it 24-7 early in the third. Brady looked pedestrian by comparison in the first half, but was only getting warmed up when he directed a TD drive on the opening possession of the third.

Brady found Mike Evans for a 32-yard completion over the middle that set up Leonard Fournette’s short TD run that cut the lead to 17-7. Morris knew the Falcons were in for a long second half after watching Brady release the ball.

“The one throw I can think of is the Mike Evans pass down the middle of the field,” Morris said. “It was an absolute laser beam. He threw a couple of good balls on that drive. He was able to get his team going. He got them on the board and got those guys rolling, so that was part of the problem. We’ve got to answer when those guys get hot. We’ve got to get hotter.”

Ryan tried to rally the Falcons and looked far improved from his three-interception performance last week at the Los Angeles Chargers. But the Atlanta offense was no match for linebacker Devin White, who sacked Ryan on three consecutive possessions and set the tone for the Falcons’ dysfunction the rest of the way.

Ryan didn’t think the Bucs did anything differently on defense in the second half.

“I think it was similar stuff,” he said. “We just didn’t execute as well as we needed to. We had a handful of chances in the second half to make some plays and we didn’t do it. I think if one or two go a little bit differently, it changes the momentum.”