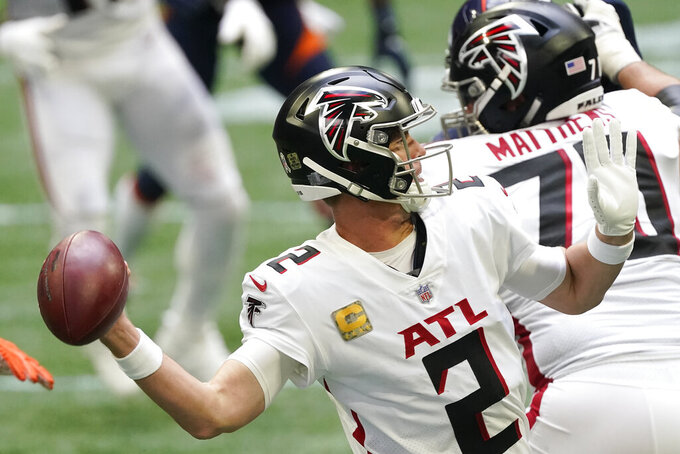 Atlanta Falcons quarterback Matt Ryan (2) works in the pocket during the second half of an NFL football game against the Denver Broncos, Sunday, Nov. 8, 2020, in Atlanta. (AP Photo/John Bazemore)

ATLANTA (AP) — The Atlanta Falcons have reached their bye week on a modest two-game winning streak and with three victories in their past four games.

Almost nobody saw that coming after a 0-5 start.

It’s still too early to tell if interim coach Raheem Morris will last beyond the remainder of this season, but he has done a good job of communicating expectations and holding everyone accountable. The Falcons aren’t giving up on 2020.

“There’s a lot that can happen between now and the end of the season,” quarterback Matt Ryan said. “We’ve got to keep our focus now.”

Falcons owner Arthur Blank fired Morris’ predecessor, Dan Quinn, and general manager Thomas Dimitroff after a poor start. Blank was impressed with a 6-2 finish in 2019 and believed continuity would help the team play hard for the likable Quinn.

Instead, the Falcons started so poorly that Blank couldn't wait any longer to make a move.

He promoted Morris from defensive coordinator and named CEO Rich McKay as de facto GM. Depending on how the Falcons finish the season, the team will either go in for a full rebuild with a new head coach or will keep Morris and tinker with the roster heading into 2021.

“I think we responded as good as you can,” defensive tackle Grady Jarrett said. “We just control going out there and not giving up on our season and fighting every week.”

There is still a lot to like about the Falcons offense. Ryan is still in his prime, and Atlanta has a formidable duo in receivers Julio Jones and Calvin Ridley. The defense still needs to pressure the quarterback more consistently and force more takeaways. Special teams has a dependable kicker in Younghoe Koo.

Firing Quinn helped the team move on from its laughingstock status that followed the botched onside kick recovery in Dallas and the meltdown the following week against Chicago.

Those two losses made Atlanta the first team to blow 15-point leads in the fourth quarter in a single season, and the Falcons somehow managed to do so in consecutive weeks. They followed those embarrassments with a loss to Detroit that wasn't much easier to stomach.

Morris will likely stay on as head coach if Atlanta gets hot and ekes out a playoff appearance, but first things first. The Falcons have to keep finding a way to go 1-0 each week, as Morris says, and let the rest of the season play itself out.

Ryan can still sling it. The 13th-year veteran leads the NFL in yards passing and keeps finding ways to get as many receivers involved as he can. Ryan benefited from the use of a no-huddle in the first half of Sunday’s 34-27 win over Denver, so the team needs to use that approach more often.

The running game keeps getting stuffed. Coordinator Dirk Koetter keeps trying to keep Todd Gurley and Brian Hill involved to establish a threat, but neither back is able to consistently get to the second level of the defense. This is the one glaring problem on offense. If the Falcons can fix this, play action will open up even better for Ryan. Gurley is averaging just 64.9 yards rushing per game.

“We didn’t get too many explosive runs, but it’s tough to run in this league,” Gurley said. “There is definitely some stuff we can fix on the offensive side.”

Olamide Zaccheaus and Brandon Powell stepped up with Ridley out against Denver and caught touchdown passes. Both players showed that Ryan can still find open windows in tight coverage regardless the target.

“They’re all talented,” Ryan said. “They’re all tough. They’re involved in the run game. They’re not scared to go over the middle to catch footballs and play physical. It’s a really good group.”

The pass defense is allowing 310.3 yards per game to rank second worst in the NFL. It’s a breakdown throughout the defense with the front seven not bringing consistent pressure and the secondary playing lax in zone coverage.

Calvin Ridley missed the game with a foot injury, but he should be back when the Falcons return from their bye. Defensive end Takk McKinley, who missed five games with a groin injury, won't be back. The Falcons waived McKinley on Monday, less than a week after he tweeted unfavorable comments about the team not trading him in 2019 or this year.

14 sacks. The Falcons simply don’t get enough pressure from their edge rushers. Jarrett is the only consistent threat to get to the quarterback.

Rest up and get ready for the second half of the season. Atlanta visits its longtime rival New Orleans on Nov. 22.