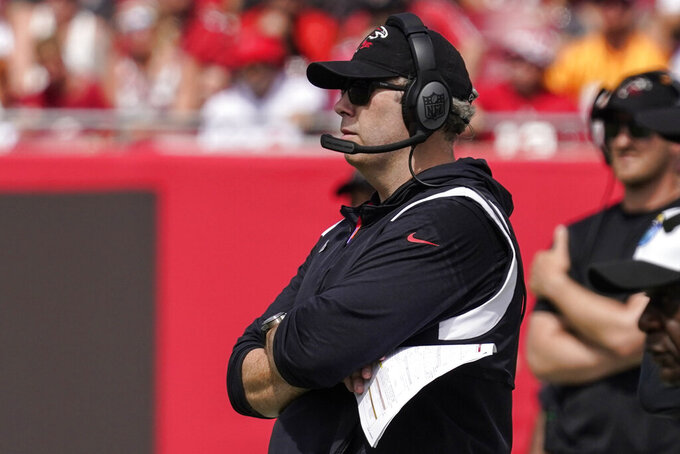 ATLANTA (AP) — In sidestepping a question about the much-debated roughing-the-passer call that torpedoed Atlanta's comeback attempt against Tampa Bay, Falcons coach Arthur Smith said, “I have to find out how I can coach better.”

A Falcons team picked by many to contend for little more than the No. 1 pick in next year's NFL draft has instead been competitive in every game this season, including Sunday's 21-15 loss at Tampa Bay. The Falcons have surpassed those low expectations by playing five consecutive games decided by one score.

If Smith must coach better in any area for his Falcons (2-3), perhaps it is in the passing game.

Better balance in Atlanta's offense, which continued to produce on the ground, might have prevented the roughing-the-passer call against Grady Jarrett from having such a devastating impact on the team's chances.

The call wiped out Jarrett's fourth-quarter sack of Buccaneers quarterback Tom Brady, extending a Tampa Bay drive to close out the win. The sack appeared to be routine to almost every observer with the exception of referee Jerome Boger, who threw the flag.

There was widespread outrage on social media. Former Tampa Bay coach Tony Dungy declared on his Twitter account: “It was a terrible call.”

There is no guarantee the Falcons could have taken the lead if given another possession. After all, Marcus Mariota threw for only 147 yards. He has been held under 200 yards through the air in three of five games.

Mariota is playing well enough to keep the Falcons competitive. He threw a touchdown pass, wasn't intercepted and had a team-leading 61 yards rushing.

The question for Smith: Is Mariota playing well enough to make the Falcons a winner? Perhaps with more offensive balance, Atlanta wouldn't have trailed Tampa Bay 21-0 entering the fourth quarter.

Mariota's performance through five games has been mid-level at best. He has thrown only four scoring passes with four interceptions. He has provided stability for an offense in transition but not standout production.

Inevitably, Smith must find out if the rookie makes the Falcons — and the coach — better for the future.

The Falcons rushed for 151 yards in their first game since placing leading rusher Cordarrelle Patterson on injured reserve following knee surgery. Atlanta has rushed for at least 150 yards in four of its first five games for the first time since 1986. While Smith says the offense will look different each week, the commitment to the running game is strong and consistent.

There was reason to believe the Falcons finally had found help for their pass rush when they opened the season with four sacks against New Orleans. With Jarrett's would-be big play wiped out by the penalty, Atlanta had no sacks against the Bucs and has eight through five games.

The Falcons were last in the league with 18 sacks last season, 11 fewer than any other team.

The Falcons' trade of Deion Jones to Cleveland supports the team's confidence in their inside linebackers on the roster, including Mykal Walker. Walker had 11 tackles against the Bucs before leaving in the second quarter with a groin injury. Rookie Troy Andersen took over for Walker.

Jones opened the season on injured reserve after having an offseason shoulder surgery. The Falcons will receive a late-round draft pick in the deal.

Walker is starting alongside Rashaan Evans.

The Falcons missed tight end Kyle Pitts, who was held out with a hamstring injury. Anthony Firkser and Parker Hesse each had one catch while Feleipe Franks had two targets at tight end.

45 — Rookie Tyler Allgeier had 13 carries for 45 yards as the starting running back against Tampa Bay's tough defense. He had a long run of 17 yards and averaged 2.3 yards on his other 12 carries. It was a sharp decline from his 84 yards on 10 carries in a 23-20 win over Cleveland on Oct. 2.

Atlanta will look for a stronger start on offense when it returns home to play the NFC West-leading San Francisco 49ers on Sunday.