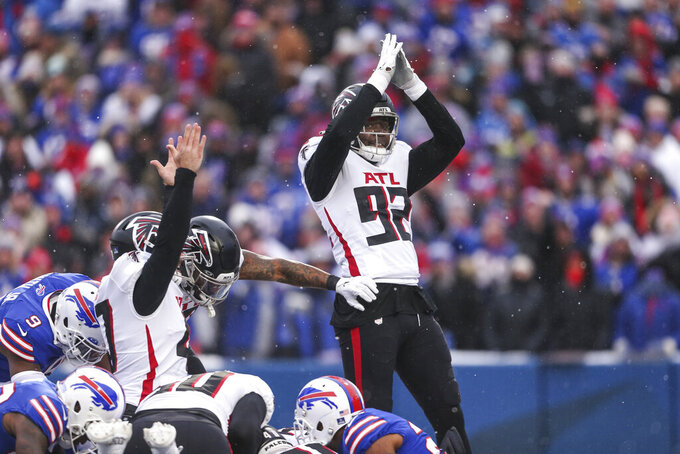 Atlanta Falcons outside linebacker Adetokunbo Ogundeji (92) celebrates after the team scored on a safety during the first half of an NFL football game against the Buffalo Bills, Sunday, Jan. 2, 2022, in Orchard Park, N.Y. (AP Photo/Joshua Bessex)

ORCHARD PARK, N.Y. (AP) — Duron Harmon sees promise in the Atlanta Falcons, while coming to the realization they have only one more game left in their season, and his future beyond that is uncertain.

Atlanta was eliminated from playoff contention following a 29-15 loss to the Buffalo Bills on Sunday. Harmon spoke about the encouraging signs he’s seen in a team that began the year in transition under first-time coach Arthur Smith.

“You come back and play to play meaningful games, to get to the playoffs ... and we fell short. So it’s tough,” said the ninth-year safety, who was brought in to provide stability among a young group of defensive backs.

“But we’re a young team and this will be a feeling that hopefully everybody in this locker room remembers, leaving the field, the Bills clinching a playoff berth," he added. "Hopefully we can use that as some type of motivation to get back to this point where we’re playing meaningful football in late December.”

The Falcons (7-9) went down swinging against the AFC East-leading Bills (10-6), who clinched a playoff berth with the victory, coupled with the Baltimore Ravens losing to the Los Angeles Rams.

Despite an injury and COVID-19-depleted defense, Atlanta intercepted Josh Allen on three consecutive possessions spanning halftime and held the fourth-year starter to a career-worst 17.0 passer rating.

The first two interceptions, one by Harmon in the end zone and a second by A.J. Terrell, led to Atlanta scoring 10 points in the final 1:48 of the first half to take a 15-14 lead. Linebacker Foye Oluokun then picked off Allen three snaps into the third quarter and returned it to Buffalo’s 25 before the Falcons ran out of momentum.

After failing to score on its opening drive, Atlanta was trampled by Buffalo’s running attack with Devin Singletary capping the Bills' next two drives with rushing TDs.

“We came up short there at the end,” Smith said. “But our guys battled. We ended the half well and we had our chances. ... Josh Allen, he’s a terrific player and he extended plays.”

Atlanta’s youth stood out even in defeat. Before exiting the game with a hamstring injury, Kyle Pitts had two catches for 69 yards in becoming the NFL’s second rookie tight end to surpass 1,000 yards receiving, joining Mike Ditka in 1961.

Smith had no update on Pitts after the game, saying the rookie will have tests Monday.

Terrell continued his breakout season as well. Aside from his interception, Terrell spent the day covering Buffalo’s top threat, Stefon Diggs, who was limited to five catches on nine targets for 52 yards.

“The results didn’t come out how we wanted but we played a good team game,” Terrell said. “Just didn’t come out with the W towards the end. Just something we can get better from and learn from.”

It was Atlanta's offense, which has spent the last half of the season missing its top threat Calvin Ridley (personal reasons), that fell short.

The outcome wasn’t decided until there were five minutes remaining, and after the Falcons had a touchdown reversed on replay review, compounded by quarterback Matt Ryan being flagged for taunting with 6:07 remaining.

Rather than scoring on a 7-yard run and cutting Buffalo’s deficit to 29-22, officials ruled Ryan’s knee was down at the 1. The taunting penalty then pushed Atlanta back to the 16, where Ryan threw incompletions into the end zone on third and fourth down.

“So it’s disappointing. But the rules are the rules, and so you have to play by them," said Ryan, who was flagged after exchanging words with Bills safety Jordan Poyer. "Quite frankly, I didn’t think it was a taunting, but that’s my opinion.”

Ryan also sees good things in Atlanta’s future, but for now, the 36-year-old quarterback has to stomach missing the postseason for a fourth consecutive year.

“But I am proud of the way the guys have fought all year," he added. "I think we can be better at moving forward and be better off for these experiences.”