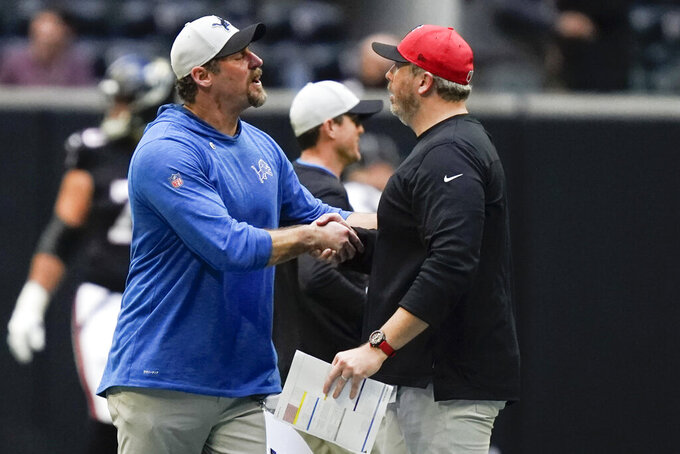 ATLANTA (AP) — The Atlanta Falcons remain a long shot for the playoffs. They also remain below .500 at 7-8, but already the Falcons have a win.

They’ve won the right to be called relevant as December comes to a close.

For most franchises, that’s a modest claim. For the Falcons, who haven’t made the playoffs since 2017 and finished with only four wins last season, it’s a notable achievement.

Sunday's 20-16 win over Detroit showed the Falcons have developed the ability to win close games that escaped the team the last three seasons, especially in 2020's 4-12 collection of embarrassing losses.

Linebacker Foye Oluokun's last-minute interception at the Atlanta 1 saved the win. The play serves as proof of improvement under first-year coach Arthur Smith. The Falcons are 7-2 in one-possession games.

Still, there's much work left. The Falcons have not managed to achieve the sustained success needed for a winning season, much less a playoff season.

The win over the Lions moved the Falcons up only one spot, to No. 10 in the conference standings. They'd lose a tiebreaker with Minnesota, also 7-8, because the Vikings have a better NFC winning percentage.

There's no cause for the Falcons to worry about playoff tiebreakers. They don't control their playoff future even if they win their last two games, and next week's visit to Buffalo (9-6) should command all their attention.

A loss to the Bills or at home against New Orleans to close the regular season on Jan. 9 would eliminate Atlanta from playoff contention.

“It’s really pretty simple,” Smith said Monday. “Nothing else matters but trying to win the game this weekend. We’ve just got to try to win every game in front of us and then it will work itself out the way it’s supposed to."

Kyle Pitts' rookie season continues to gain momentum. The tight end had six catches for 102 yards after being selected to the Pro Bowl team. His 949 receiving yards have set a single-season team record, passing the 930 by Tony Gonzalez in 2012.

The Falcons averaged only 2.6 yards on the ground. Cordarrelle Patterson had seven carries for 14 yards. Mike Davis ran for 28 yards. Most telling: The decisions to rely on neither back for the tough yards but instead have quarterback Matt Ryan run keepers when those yards were necessary.

Patterson sometimes lined up wide against the Lions, where he was most effective early in the season, but he had only one catch. Patterson needs the ball in space more often, but his early-season success as a receiver seems to have earned him greater responsibility as a traditional running back. That hasn't been a formula for success. He has gained 32 yards on 18 carries in his last two games.

Oluokun's team-leading 14 tackles and game-saving interception again stamped the linebacker as a building block for the defense, alongside cornerback A.J. Terrell. When Smith talks about developing a winning culture, he can point to Oluokun's winning play as an example. Oluokun already has 166 total stops, far surpassing his previous high of 117 in 2020.

One week after looking like an emerging player when he had eight catches for 91 yards against the 49ers, Russell Gage had only four catches for 39 yards. Gage's fumble at the Atlanta 37 with 2:18 remaining could have been the biggest play of the game if not for Oluokun's interception in the final minute.

WR Tajae Sharpe was held out with a foot injury suffered at San Francisco.

3 — The number of games won by Alabama at Mercedes-Benz Stadium since the Falcons' last true home win before Sunday: 2020 and 2021 SEC championship games and this season's opener against Miami. The Falcons beat the Raiders 43-6 on Nov. 29, 2020 before losing their next seven games in Atlanta, including their first five this season. The Falcons were the designated home team in London on Oct. 10, when they beat the New York Jets 27-20.

The Falcons play at Buffalo on Sunday in their final road game of the regular season. They conclude the schedule hosting New Orleans in Week 18.