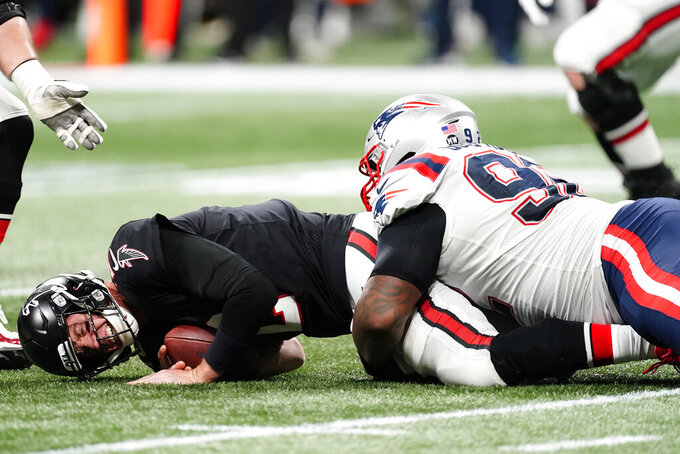 ATLANTA (AP) — The first shutout loss in six years for the Atlanta Falcons was only the capper on a miserable week for their offense.

Atlanta's 25-0 loss to the New England Patriots on Thursday night followed Sunday's 43-3 defeat at Dallas in a week quarterback Matt Ryan and the Falcons would rather forget.

“It’s been a tough five days offensively,” Ryan said, adding the woes are “across the board.”

The Falcons haven't scored a touchdown in more than two games. The last time they reached the end zone, Olamide Zaccheaus caught a fourth-quarter TD pass from Ryan for a 24-6 lead at New Orleans in a game Atlanta won 27-25 on Nov. 7.

The impressive win over the Saints left Atlanta 4-4. Since that touchdown by Zaccheaus, the Falcons (4-6) have been outscored 87-6.

The short-handed Falcons lost an opportunity to gain momentum with a botched red-zone opportunity in the second quarter.

With his team trailing 10-0, Ryan was sacked by Kyle Van Noy on a third-and-1 play from the Patriots 14. Younghoe Koo's 45-yard field goal was wiped out by an illegal formation penalty. Koo's 50-yard attempt was wide left.

“It kind of snowballed from there,” coach Arthur Smith said.

The Falcons’ offense was thin even before versatile running back Cordarrelle Patterson was held out with an ankle injury. Patterson is the team’s leading rusher and also has a team-leading five touchdown receptions.

Smith said the decision to have Patterson inactive came after the running back worked out before the game.

Smith said Patterson “is a guy who wants to play” but said he didn't think it was in Patterson's “best interest” to play.

“It wouldn’t be good for him,” Smith said, adding: “You’ve got to anticipate, you’ve got to have contingency plans.”

No contingency plan resulted in points. The Falcons were held to 11 first downs and 165 total yards.

“We tried everything we could,” Smith said. “Clearly it wasn’t good enough. Credit to New England.”

The Patriots focused their defensive efforts on rookie tight end Kyle Pitts, and the Falcons were unable to find consistent offense from such other players as running back Qadree Ollison, who was called up from the practice squad, and wide receiver Russell Gage.

The Falcons rushed for only 40 yards, including 34 by Ollison. Ryan completed 19 of 28 passes for only 153 yards with two interceptions. Ryan was sacked four times and suffered a toe injury in the first half he insisted did not affect his performance.

Pitts had three catches for 29 yards.

Smith, the first-year coach and former Tennessee Titans offensive coordinator, vowed he will find fixes for the slumping offense.