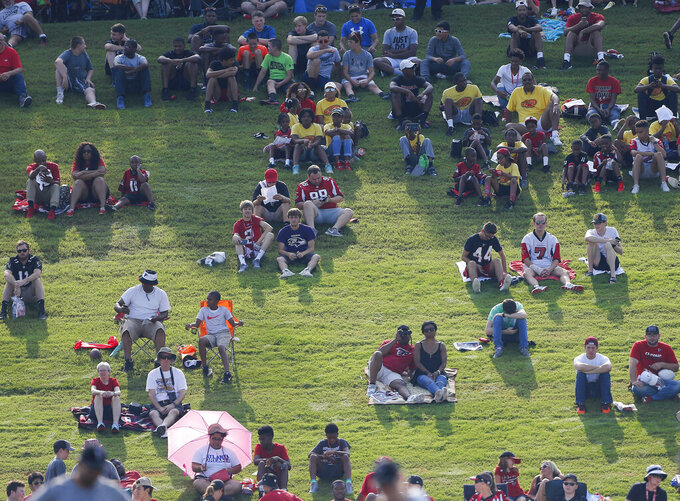 File-This July 27, 2017, file photo shows Atlanta Falcons fans watching during NFL football training camp in Flowery Branch, Ga. The Atlanta Falcons have cleared out of their practice facility and given the keys to the Los Angeles Rams for the week. The Falcons are determined to be good hosts to the Rams, who are using the facility as their practice site for Sunday’s Super Bowl 53. (AP Photo/John Bazemore, File)

ATLANTA (AP) — The Atlanta Falcons have cleared out of their practice facility and given the keys to the Los Angeles Rams for the week.

The Falcons are determined to be good hosts to the Rams, who are using the facility as their practice site for Sunday's Super Bowl 53. The Falcons insist they'd have been just as hospitable if it were their bitter rival New Orleans Saints using their locker room, meeting rooms and practice field for the week.

As part of Atlanta's winning bid for this Super Bowl, the Falcons' facility in Flowery Branch, Georgia, north of Atlanta, is home to the Rams, who beat the Saints for the NFC championship. The AFC champion New England Patriots are practicing at Georgia Tech's facility this week.

Each practice site has an indoor facility, which will be important with possible winter weather arriving on Tuesday.

The obvious dream of Falcons owner Arthur Blank was to have his team play in Atlanta's Super Bowl in the second year of Mercedes-Benz Stadium. Instead, the Patriots — who beat the Falcons in Super Bowl 51 — are back, while the Rams look to repeat their win in the last Atlanta Super Bowl in 2000, when they represented St. Louis.

Spencer Treadwell, Falcons vice president of operations and facilities, said work began to prepare the Flowery Branch facility long before it was known which team would move in.

In the case of the Rams, who were making the cross-country flight, Treadwell said communication was especially important. The Falcons made sure the Rams knew what equipment would be available to be borrowed for the week.

The locker room and meetings rooms were cleaned out for the Rams. Private offices, which won't be used, are locked.

"We've been meeting as a staff for several weeks just to make sure we're buttoned up," Treadwell said. "Obviously, we know they're going to try to make this the Rams' facility for the week, so we're going to do what we can to assist and accommodate that and support them in a great week of preparation."

Treadwell said the same Southern hospitality would have been offered to the Saints — even though the mere mention of the division rivals moving into the Falcons' facility left Atlanta coach Dan Quinn grim-faced last month.

"I guess I'm most disappointed we won't be the ones playing and practicing at our site," Quinn said on Dec. 20.

Similarly, Atlanta Mayor Keisha Lance Bottoms was certainly happy to have the Rams headed to town. She recently said she was looking forward to a game that featured "anybody other than the Saints."

"I know there's going to be a bounty on my head for saying that," she said in an interview with These Urban Times. "But, if it can't be the Falcons, then hey, as long as it's not the Saints then I am happy."

At a news conference to discuss Super Bowl preparations, Bottoms said she was just joking about the Saints.

Treadwell said it is more important to represent Atlanta well in this Super Bowl than to be influenced by the Falcons' long rivalry with the Saints.

"Obviously, we were going to be gracious hosts to whoever came and we were going to do the best we could to support their efforts in preparing for the biggest game of their lives," Treadwell said. "At that point we have a job to do and we have to remain professional. We're part of the host committee.

"If you look at it, we want the city to look good for this game and we want our participants to have a good experience when they come here. If it were the Saints we'd have done the same things we've done for the Rams and treat them as best as we possibly could."