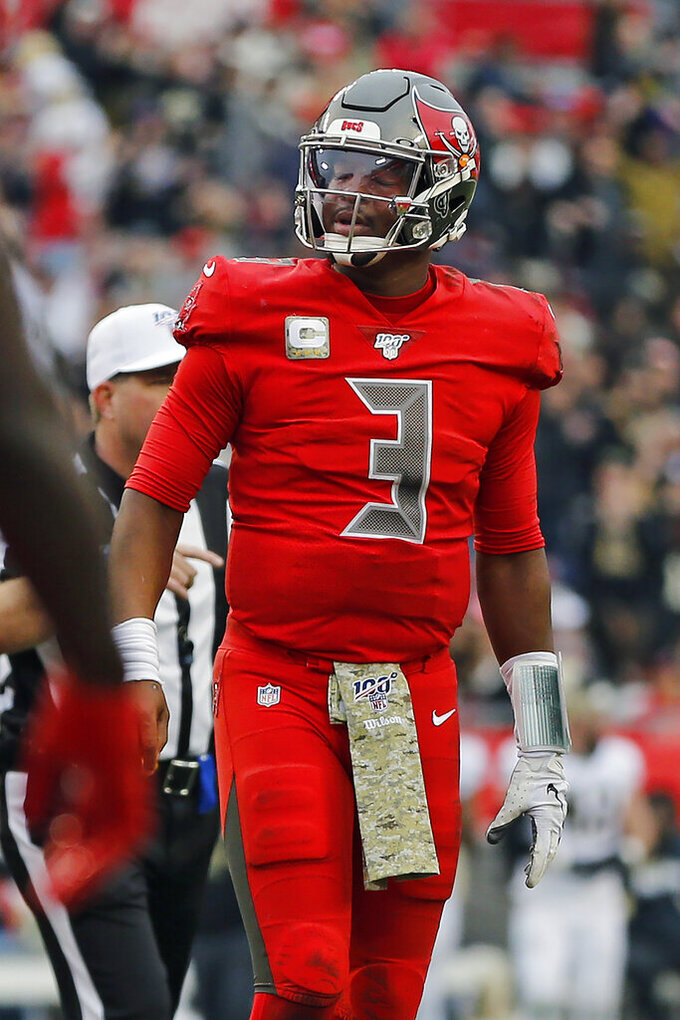 ATLANTA (AP) — In a way, the 2020 season has already begun for the Atlanta Falcons and the Tampa Bay Buccaneers.

With six weeks to go, neither team has a realistic path to the playoffs.

Sunday’s game will be as much about the future as the present.

The Falcons (3-7) want to keep building on their stunning turnaround the past two weeks. After a six-game losing streak, they bounced back with perhaps the most surprising result of the season — a 26-9 upset at first-place New Orleans — followed by a 29-3 rout at Carolina.

“Yes, we wish we had been playing like this earlier in the season,” Falcons safety Ricardo Allen said. “But, man, we’ve just got to take it for what it is, know that we’re doing it now, and try to finish out the season the way we know we can.”

Tampa Bay (3-7) has the same record but is heading in the opposite direction with five losses in its past six games.

The Bucs’ biggest issue is whether to stick with quarterback Jameis Winston, who is earning nearly $21 million in the final year of the contract he signed as the No. 1 overall draft pick in 2015.

Winston has thrown for 300-plus yards in a franchise-record five consecutive games, but that’s only part of the story. He was intercepted four times in last Sunday’s 34-17 loss to New Orleans and leads the NFL with 22 turnovers, including 18 picks.

The fifth-year pro knows that he’s got to clean up his game — and he may be running out of time to do it in Tampa Bay.

“Whether (the turnovers are) coming from me, whether it’s anybody else — it’s always my fault,” Winston said. “I’m the quarterback.”

Coach Bruce Arians sent a message to a roster filled with younger players when he released 2016 first-round draft choice Vernon Hargreaves for failing to hustle on a long pass completion.

“Nobody likes losing, but I’ll never stop fighting,” receiver Mike Evans said. “We’re going to fight until the end and live with the results.”

Some things to watch for in Sunday’s game at Mercedes-Benz Stadium:

Evans and Chris Godwin have combined for 121 receptions and 1,880 yards — the most receiving yards by a pair of teammates through 10 games since Demaryius Thomas and Emmanuel Sanders (2,059) in 2014.

Evans is second in the NFL with 993 yards, seven shy of joining Hall of Famer Randy Moss as the only players to begin a career with six consecutive 1,000-yard seasons. Godwin has 63 catches for 887 yards. Both have seven TDs, tied for fourth in the league.

The Falcons have their own dynamic duo at receiver.

Six-time Pro Bowler Julio Jones has 59 receptions for 882 yards, while 2018 first-round pick Calvin Ridley hauled in eight catches for 143 yards and a touchdown in the victory over Carolina.

“If you like wide receiver play, this is the game to watch,” Quinn said. “Both teams are capable of making explosive plays.”

After a 2-2 start, the Bucs are closing in on missing the playoffs for the 12th consecutive season. Only the Cleveland Browns, who haven’t earned a berth since 2002, have a longer postseason drought.

“We know that we have the talent,” tight end O.J. Howard said. “We’ve just got to put it all together and stop beating ourselves.”

The Falcons might look to Kenjon Barner to bolster the running game if Devonta Freeman continues to be hampered by an injured toe. Brian Hill got the start in Carolina but managed only 30 yards on 15 carries.

Barner had a 78-yard punt return for a touchdown — earning NFC special teams player of the week honors — and got two carries for 15 yards in his limited time with the offense.

The Falcons will need to keep an eye on Tampa Bay linebacker Shaquil Barrett, who ranks second in the NFL with 11½ sacks.

“On a team that has a very good front seven in a number of spots, he stands out,” Quinn said.

The Falcons have suddenly found a knack for getting to the quarterback after managing an NFL-low seven sacks through their first eight games. They piled up 11 sacks in their past two victories, led by Adrian Clayborn, Vic Beasley and Grady Jarrett.

The Falcons improved play in the secondary can partly be attributed to a position change for Allen, who shifted from free to strong safety a few weeks ago.

One of the team’s most respected players and vocal leaders, Allen believes he’s in better position to influence the game at strong safety.

While the Falcons have shown improvement against the pass, the Bucs’ secondary is a mess.

Tampa Bay ranks next-to-last in the NFL in both yards allowed (290.9 yards per game) and TD passes surrendered (25). That doesn’t bode well against Atlanta’s Matt Ryan, who last week moved up to No. 10 on the league’s career list for passing yards.