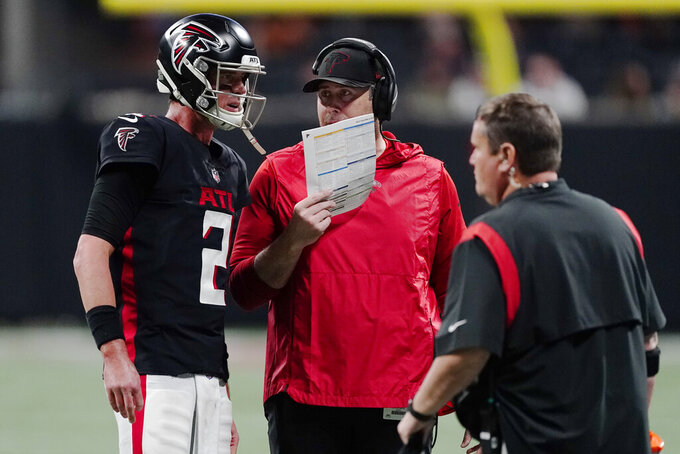 ATLANTA (AP) — The Atlanta Falcons wanted to try to run the ball against the NFL’s top rushing defense.

That part worked out. It just wasn't enough against Tom Brady and Tampa Bay.

Cordarrelle Patterson had 78 of Atlanta’s 121 yards rushing, but Brady passed for four touchdowns in the Buccaneers' 30-17 win on Sunday.

The Falcons dropped to 0-7 at Mercedes-Benz Stadium since Nov. 29, 2020. They have been outscored 140-66 in losing all five games in Atlanta this season. They fell to 0-10 all-time against Brady.

Not exactly what first-year coach Arthur Smith was looking for.

“We’ve got to be cleaner with the football, there’s no doubt about that,” Smith said. “Deflate is not a word we use. We’re going to keep fighting and swinging. Call it damaging, call it deflating, but we don’t use those words. We’ll continue to swing and fight and we’ll fight ’til the finish.”

Matt Ryan was forced into passing situations as the Falcons tried to battle back from a second-half deficit. The Buccaneers finished with five sacks, including two apiece for Vita Vea and Ndamukong Suh.

Vea blew past rookie guard Jalen Mayfield to take down Ryan for a 9-yard loss on a third-down play early in the fourth quarter, helping stop Atlanta's attempt to rally.

The Falcons (5-7) dropped into a tie with Carolina and New Orleans while the defending Super Bowl champion Bucs (9-3) opened a four-game advantage in the division.

Atlanta’s offense has been inconsistent, scoring just one touchdown in three of the last four games. The lone score came on Mike Davis’ 17-yard run in the first quarter, tying it at 7.

The Falcons had a chance to go in front in the second quarter, moving to first-and-goal from inside the 1. But they had to settle for Younghoe Koo’s 21-yard field goal and a 13-10 deficit.

Ryan lost a couple of yards falling on a bobbled snap, sandwiched around a pair of incompletions.

The only other touchdown for the Falcons came on defensive end Marlon Davidson’s 3-yard interception return late in the second quarter.

Atlanta had a rough start to the second half when Russell Gage caught a 20-yard pass over the middle to the Tampa Bay 45, only to cough the ball up on a hit by Pierre Desir. The Falcons punted on their next three possessions.

“We had spurts, you know?” Ryan said. “But the consistency wasn’t there. I think there was better consistency there early. We have to find a way to keep drives going and then finish drives when we get our chances. You can’t give them anything.”

Ryan was pressured all day, getting hit 11 times. On the flip side, the Falcons got just one hit on Brady.

“The sacks are going to hurt you when you read a stat like that,” Smith said. “They did a nice job. They kept Brady clean. Obviously it’s everybody’s intention to get after the quarterback. They have got good players up front. We’ll look at it and see what we can tweak here, but that’s usually a pretty good tell of how it went.”