Falcons' win over Panthers boosts optimism for second half 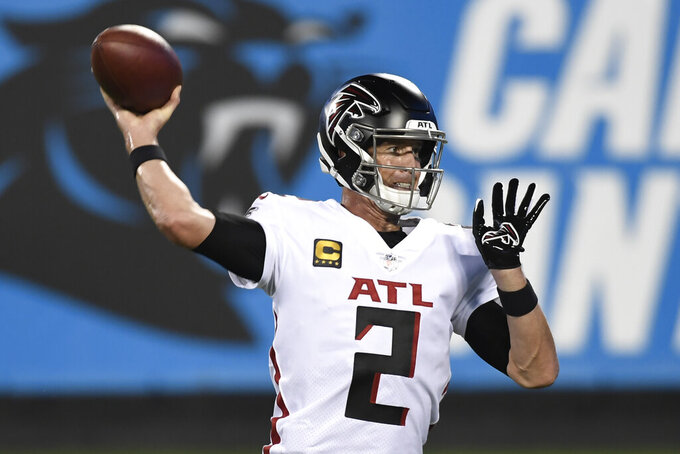 ATLANTA (AP) — After the Atlanta Falcons reached the midpoint of their season with only two wins, Matt Ryan dared to suggest the second half of the season could be very different.

Clearly, the Falcons' success in Thursday night's 25-17 win at Carolina did wonders for the quarterback's confidence. Can the Falcons (2-6) make a run?

“Absolutely,” Ryan said. “We’ve been in every game we’ve played this year. We’ve had some crazy losses, just to be frank. I really believe we’ve got the caliber of team to be in every game we’re going to play the rest of the season.”

Ryan's confidence may not be as farfetched as some might think. The Falcons have won two of their last three games. They could have beaten Detroit last week if not for running back Todd Gurley's inability to keep himself from scoring late in the game, leaving the Lions time for their last-minute winning drive.

An unlikely turnaround would be needed to save the Falcons from their third consecutive losing season, but interim coach Raheem Morris also was inspired by the performance against the Panthers.

The Falcons followed the script laid out by Morris by having their offense finish each half with the ball and their defense deliver the necessary big play.

Blidi Wreh-Wilson's interception with less than a minute remaining clinched the win.

On Friday, Morris was still beaming with pride.

“It all boils down to getting the win,” Morris said. “So, to see the guys come out and make plays is something that I expect every single week. We have so much talent and so many good players on this football team, I always wonder which one is going to make the play.”

If the Falcons had made better use of their talent and not started the season 0-5, former coach Dan Quinn probably would still have his job. The challenge for Morris is to build momentum from the win over Carolina.

The Falcons were dominant within the 20s, posting lopsided advantages in first downs (28-18) and holding the ball 13 minutes longer than the Panthers.

Ryan completed nine passes of 16 yards or longer while passing for 270 yards. There was good balance with 131 yards rushing.

Despite the big offensive numbers, the Falcons continue to struggle in the red zone. The offense reached the end zone on only two of six red-zone possessions. That includes an unlikely 13-yard scoring run by Ryan.

As the offense stalled too many times near the goal line, Younghoe Koo kicked four field goals.

Morris on Friday said LB Foye Oluokun “is making the hard plays look easy” and is an emerging leader of the defense. Oluokun had five tackles against the Panthers, including a key fourth-down stop when he flashed his speed to drop quarterback Teddy Bridgewater.

Morris said he spoke with Oluokun early in the game when the coach was worried about the defense focusing on forcing fumbles instead of making tackles. He said it was “refreshing” to know Oluokun would pass the message along to others on defense.

"I think that part of his leadership game has really stepped up and really fires a coach up, really fires the people up around him,” Morris said.

Though Todd Gurley scored on a key 3-yard run in the fourth quarter and had 18 carries for 46 yards, he watched many plays from the sideline as Brian Hill had 11 carries and led the team with 55 yards rushing.

It appeared Gurley was often trying to stay loose when on the sideline, and he said his time out of the game was not his decision.

Asked if Gurley was limited by an injury, Morris said, “You just never know with Gurley. I don’t know what happened injury-wise. I just know he’s got to get himself going and he got himself going late. He had a couple really good runs at the end and finished the game for us and that’s what he was brought here to do.”

Falcons WR Calvin Ridley injured his left ankle in the second quarter and missed the second half. Morris said he would know more about Ridley's status next week.

137 — Julio Jones had seven catches for 137 yards, his 58th career game with at least 100 yards receiving. That is the fourth most in NFL history and the most among active players. The players with more 100-yard games are in the Pro Football Hall of Fame: Jerry Rice (76), Randy Moss (64) and Marvin Harrison (59).

The Falcons will look for their third win in four outings in their Nov. 8 home game against the Denver Broncos. Atlanta won 23-16 at Denver on Oct. 9, 2016 in the last meeting between the teams.