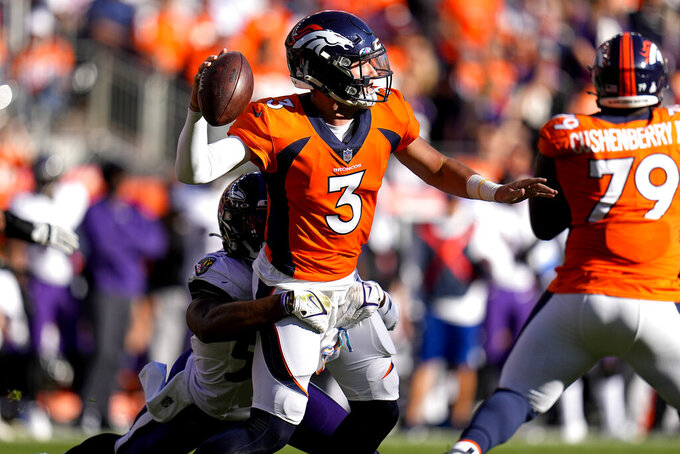 Denver Broncos quarterback Drew Lock (3) is hit by Baltimore Ravens outside linebacker Justin Houston during the second half of an NFL football game, Sunday, Oct. 3, 2021, in Denver. (AP Photo/Jack Dempsey)

ENGLEWOOD, Colo. (AP) — Broncos coach Vic Fangio said concussed quarterback Teddy Bridgewater was able to lift weights and attend meetings Wednesday and might even be back at practice Thursday.

Lock played the second half Sunday against Baltimore after Bridgewater took a shot to his chin from Ravens rookie linebacker Odafe Oweh just before halftime of the Broncos' 23-7 loss.

Neither Bridgewater nor Lock had a good game last weekend.

After completing 75% or more of his passes in his first three starts, Bridgewater was just 7 for 16 for 65 yards with two sacks and a touchdown when he got hurt.

Lock was just 12 for 21 for 113 yards with three sacks and an interception in the end zone with 3 seconds left that allowed the Ravens to rub it in and ran the ball one final time to top 100 yards for a record-tying 43rd consecutive game, a move that drew Fangio's ire.

Fangio said Lock's poor performance speaks to the difficulty of transitioning from being the starter to backup status like Lock did when he lost his job to Bridgewater during training camp.

“It's difficult in that he doesn't get the reps and you're thrown in there cold,” Fangio said. “But you know I still think his below-average day was just a part of our whole offense. We just weren't very good offensively last Sunday.”

Fangio said he still sees Lock — and Lock still sees himself — as a starting quarterback.

"And then when I say he’s done good accepting it, meaning he doesn’t view himself as a career backup. But he’s doing good in his role right now.”

Lock did not meet with the media Wednesday as the starting quarterback usually does, another sign that points toward Bridgewater having a decent chance of playing this weekend when the Broncos (3-1) travel to Pittsburgh (1-3).

Lock vowed when he lost his starting job to Bridgewater in training camp that he'd be the consummate backup.

He did not seize that moment, misfiring throws, holding the ball too long and not putting any touch on deep passes, the same problems that plagued him in 2020.

Offensive coordinator Pat Shurmur didn't do Lock many favors, putting him mostly in the shotgun and calling just four runs in 21 snaps. He mostly called for three-wide receiver sets, the formation that Lock was in when he threw all but one of his league-leading 15 interceptions last season.

After the game, Lock lamented in particular his misfires to Courtland Sutton.

“Fighting everything to not make an excuse, and I’m still not going to. You know, I have got to give him a chance to catch the ball,” Lock said. "Sure, there are not very many reps for me in a week when you’re the backup, and that’s what my job is. That’s what I got to be good at right now, and I wasn’t the best at it today.”

He also said he was going to approach this week as though he'd start at Pittsburgh, where he injured his throwing shoulder last year.

“It will be a good chance to go back to Pittsburgh and kind of put some of that to bed from last year,” Lock said.