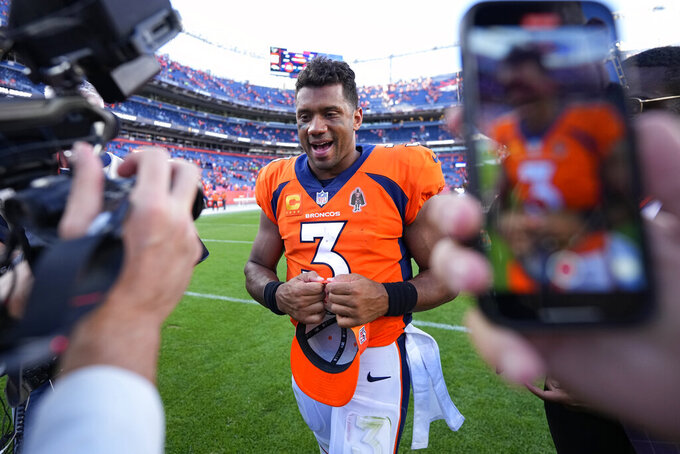 DENVER (AP) — Russell Wilson didn’t even need to glance at the play clock late in the fourth quarter of Denver's 16-9 win over Houston. The city's newest quarterback had the fans counting it down for him.

The Broncos needed some help with their clock management again, and the crowd did its part on Sunday.

Fans chanted “5, 4, 3, 2, 1 ...” as if they were watching a basketball game. Wilson said he appreciated the crowd’s assist on the late drive that ended with Brandon McManus' 50-yard field goal for the final margin.

“I guess that was helpful,” Wilson said with a chuckle. “That was great our fans were into it.”

Through a series of missed assignments and late-arriving play calls, the Broncos (1-1) used up all of their timeouts with more than seven minutes remaining in the fourth quarter. That included one when they didn't have enough men on the field for a punt return — and that missing player happened to be rookie punt returner Montrell Washington.

The crowd went from booing the Broncos early on to shouting out timely reminders of the play clock. Running back Melvin Gordon said he'd never heard anything quite like it.

“It was different,” he said of the countdown. “I don’t know if that’s a good or bad thing or what it is, but let's see if they continue to do it.”

Penalties are becoming a troubling trend for the Broncos under rookie coach Nathaniel Hackett. They led the league with a dozen infractions in their opener and among their 13 penalties for 100 yards against the Texans (0-1-1) were three false-start calls and two delay-of-game penalties. Those are typically uncommon at home.

“We’re just going to have to be sure we evaluate everything, whether it’s getting the personnel out there — or lack thereof — and making sure the plays are coming in nice and clean,” Hackett said. "We've just got to keep talking about that. I’ll talk with Russ, find out anything that I can do to help him make it better.

“That’s inexcusable," Hackett added. "That’s on us. That’s us hurting ourselves.”

It was a pedestrian home opener for Wilson, who completed 14 of 31 passes for 219 yards, along with one touchdown and an interception. He also was sacked three times.

“There’s so much good there," said Wilson, who completed just six of his first 20 passes. “But there’s also some bad that we've got to get rid of.”

Like all those yellow flags. The Broncos also had 12 penalties for 106 yards in a 17-16 loss at Seattle.

“We’ve just got to be sharper, man," Gordon said. "We know what to do. But guys are antsy to make plays and sometimes you get too locked into your assignment. That’s usually the cases for jumping offsides.”

Tight end Eric Saubert, who caught the game's only touchdown pass — a 22-yarder early in the fourth quarter — was on the fence about whether the countdown by the fans proved helpful.

“I’m of the belief that when the offense is out there, I like it quiet,” Saubert said. “But it wasn’t too bad.”