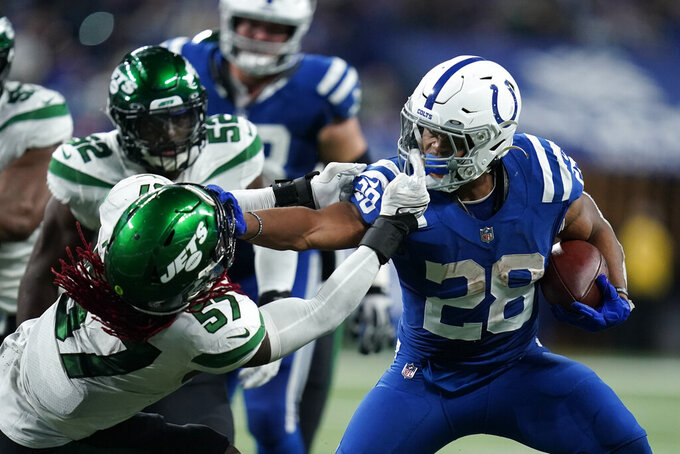 Just at the bottom of the top tier are some injured stars in Russell Wilson and Kyler Murray, as well as Aaron Rodgers, who tested positive for COVID-19 but would start if cleared by Sunday. If they’re starting, you’re going to start them over just about anyone. This does, however, speak to the depth of the quarterback position on a week where minimal starters are on bye. That’s a theme for the week.

While we’ve got 18 quarterbacks with at least a 35% chance to finish as a top-12 passer, we’ve got 11 at 50% or greater. Again, it’s probably not a week where you need to dig deep to stream unless teams in your league are hoarding quarterbacks (or if you’re in a superflex or two-quarterback league).

Matt Ryan is a notable name for sure. He ranks second behind only Dak Prescott, his opponent this week, in adjusted Passing Net Expected Points (NEP) per drop back since Week 4. This game between the Atlanta Falcons and Dallas Cowboys is primed for plenty of fantasy points; the total is 54.5, according to FanDuel Sportsbook.

Teddy Bridgewater is perhaps the top prototypical streaming option this week (as in someone available on a lot of waivers to start the week who sets up well for fantasy output). He has played well this season, generating 0.12 expected points more than anticipated on a per-play basis once adjusting for opponents. That ranks him eighth among starting quarterbacks.

Start With Confidence: These running backs are at least 60% likely to finish the week inside the top 24, according to the slate simulations. You’re starting them.

Myles Gaskin had great peripherals in Week 9: a 73.6% snap rate (via NextGenStats), a 57.4% route rate (also via NexGenStats), 20 carries, and six targets. That included four red zone opportunities. Sure, the Baltimore Ravens do rank top-10 in both Rushing NEP per carry and rushing success rate allowed to running backs, but are 28th in adjusted fantasy points per target allowed to backs. But we can go back to Gaskin this week if the workload is that great again.

Eli Mitchell latched onto a 66.1% snap rate and actually had targets (five) on his routes (27 routes), pass-game work that he had not had in recent weeks. That included a red zone target, too. It’s a great RB2 or high-end FLEX role right now.

(asterisk)D’Ernest Johnson could be slotted for waiver-wire glory this week, given the health of the Cleveland Browns’ running backs. In Week 7 when he got a spot start, Johnson played on 68.7% of the Browns’ snaps and generated 146 rushing yards on 22 rushes. He also added 22 yards on two targets while running a route on 15 drop-backs (44.1%).

Both Broncos backs have been viable in recent games, and they face an Philadelphia Eagles team that is just 29th in rushing success rate allowed to opposing backs. This season, Melvin Gordon has a 54.8% snap share, besting Javonte Williams’ 44.7% rate, and they’re each averaging at least 17.3 adjusted opportunities (carries plus doubled targets) over their past three games. Those are top-24 rates among healthy, relevant rushers right now.

Devin Singletary should be considered an RB2/FLEX start, too, if Zack Moss (concussion) is deemed out this weekend. In Week 1 with Moss inactive, Singletary had 72 yards on 11 carries while also seeing five targets on 33 routes. In Week 2, he out-snapped Moss 42 to 18 and had another 13 carries for 82 yards and three targets for 9 yards.

DJ Moore has fallen into the second tier of receivers at this point. The workload is phenomenal (a 28.9% target share and a 40.8% air yards share), but the results are mediocre (12.9 half-PPR points per game). Don’t bail on him yet. He’s at the high end of the second tier.

Jaylen Waddle had a 25.6% target share with two downfield targets last week within the Miami Dolphins’ offense, and with DeVante Parker on injured reserve, we could see a similar workload each week moving forward. The Ravens do rank ninth in adjusted fantasy points per target allowed to receivers, yet the near-guaranteed volume makes him a likely start on Thursday night.

Emmanuel Sanders has not produced in two games out of the bye: he’s averaged just 32.5 yards on his 6.0 targets. This is despite 100.0 air yards per game in that span, 39.5% of the Buffalo Bills’ air yards. He’s had 3.5 downfield targets per game the past two weeks, so the opportunity for splash plays has been there. He just hasn’t converted. A matchup with the Jets could solve that issue.

The length of the viable tight ends list, like with quarterback, is longer — given a light bye week. Of course, some of us still need some streaming-level options to decide between.

Pat Freiermuth has a 21.3% target share in two games without Eric Ebron, along with a 68.6% route rate. He’s also been targeted on a third of the Pittsburgh Steelers’ red zone attempts in that span. The Detroit Lions rank 22nd in adjusted fantasy points per target allowed to the position.

Since a Week 5 role expansion with the Jacksonville Jaguars, Dan Arnold has averaged 7.5 targets and 54.8 yards per game. That’s equal to a 19.7% target share within this offense. Given that Arnold’s average depth of target is just a lowly 6.1, there’s a higher floor of projections for him — just not a huge ceiling. The Indianapolis Colts are 31st in adjusted fantasy points per target allowed to tight ends.

Noah Fant has been activated and is back in the fantasy landscape. The tight end has a 19.6% target share in his healthy games with a hefty 25.6% red zone target share and 33.3% end zone share in those contests.