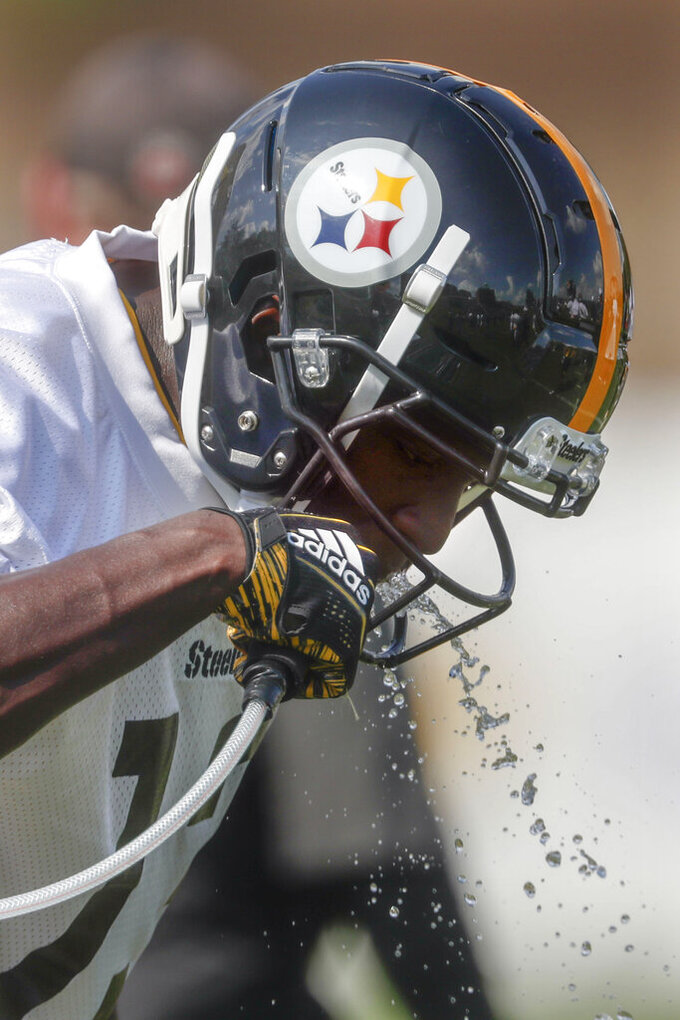 And he knew it.

So fresh off a frustrating indoctrination into the NFL in which the speedy but occasionally erratic wide receiver struggled to develop a rapport with quarterback Ben Roethlisberger and felt burdened by the inevitable comparisons to teammate JuJu Smith-Schuster, Washington headed home to Texas in search of perspective.

He found it in the cotton fields working alongside his father, James Washington Sr.

Together father and son would head out by 7 a.m. game-planning on how to attack the 300-plus acres awaiting them. James Sr. would hop on a four-wheeler. James Jr. would strap a vat of weed killer to his back, jam his ear buds in, lace up his work boots and zone out.

"It helps me clear my mind of any problems I'm having in the real world or football related or anything," Washington said. "It gives me time to think about stuff."

There was plenty to think over.

The Steelers grabbed Washington in the second round of the 2018 draft following a record-setting career at Oklahoma State, won over by his confidence and his athleticism. Yet Washington's development lagged. The intricacies of offensive coordinator Randy Fichtner's playbook didn't come easy. Neither did the production.

Washington caught just 16 passes for 217 yards and a touchdown in 2018, well off the pace set by Smith-Schuster, who hauled in 58 receptions and seven scores as a rookie in 2017. Roethlisberger offered very polite but very measured public criticism as the weeks passed and things didn't quite click.

The constant contrasting — in both production and temperament — between the reserved Washington and the eternally hyper Smith-Schuster didn't help either. Asked if he could feel himself pressing, Washington nodded.

"Oh for sure," he said. "It wasn't just me. It felt like coaches and fans and everybody, 'Oh, he's got to do what JuJu did.' I'm like, 'I'm not JuJu. You've got to realize that.' We're two different people. You know. Some guys run faster than others and some learn slower than others. It just takes time."

Space too. Something Stamford, Texas — about three hours west of Dallas — has in abundance.

So rather than pout or hit the gym, Washington headed home and returned to his typical offseason routine. He's been working out in the fields since elementary school. He didn't see why this winter — even with a regular job that made him a millionaire before his 23rd birthday — should be any different.

Sure, James Sr. would tell his son to stay home. And James Jr. would politely decline. Sitting around when there's work to be done wasn't how he was raised.

"I don't like my dad working by myself doing all that in the heat," Washington said. "I want to help him."

And, just maybe, help himself in the process.

Washington arrived for organized team activities a little thinner, a little faster and far more prepared, aware of not just his responsibilities on a given play but those of every other wide receiver on the field too.

"I never really felt like I had to relearn football, but just learn the way they played here and everything," Washington said.

He also dropped the crutch of feeling the need to leap for every catch when sometimes just finishing his route and running through the ball was enough, a habit that drew a gentle rebuke from Roethlisberger last November after Washington unwisely laid out for a deep ball against Denver. The ball smacked off Washington's hands and fell away. If he stays on his feet, maybe he hauls it in and trots into the end zone.

Washington didn't track any of the three passes Roethlisberger threw his way against the Broncos, one of six games last season in which he failed to record a single reception, something that happened just once in 51 games at Oklahoma State.

It can't happen again if the Steelers want to compete in the AFC North. Washington shouldn't lack for opportunities. All-Pro Antonio Brown's high-profile offseason exit to Oakland means, as fellow receiver Ryan Switzer put it, "170 targets that have been vacated."

How many Washington earns depends on a variety of factors, from how much attention defenses put on Smith-Schuster to how quickly free agent signee Dontae Moncrief fits. Washington understands those things are out of his control, so he left all the anxiety out there in the cotton fields.

He's also relying on a bit of personal history. Washington remembers being overwhelmed as a freshman at Oklahoma State. By his sophomore season, he was second-team All-Big 12. By his third, he was on his way to treating the Oklahoma State record book as his own personal dry erase board.

"Second year came out and it was like, 'I knew everything,'" Washington said. "It just felt natural to me."

He knows more will be expected this season. And yes, there's pressure that comes with it. But it's all in his head. If he needs a reminder of how different his life could be, he need only think about those long days in the sun with his dad, spraying cotton or fixing tractors. It helps keep him grounded even as he prepares to make an entirely different kind of leap.

"You know, I'm just taking it day by day," he said. "Trying to get better than I was yesterday. And that's all I can really do at this point."