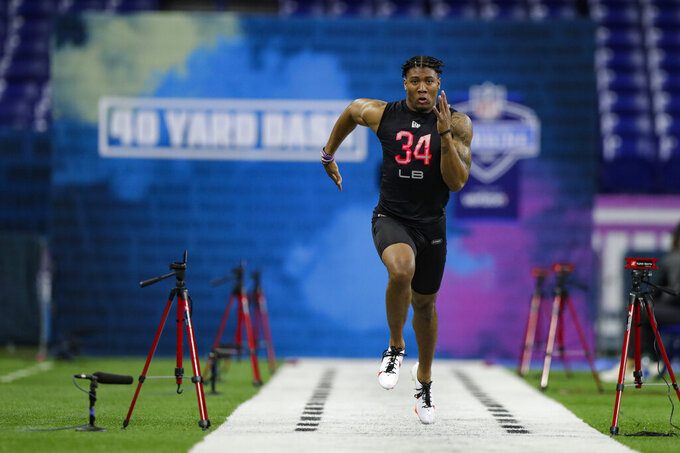 INDIANAPOLIS (AP) — Speed continues to be all the rage at the NFL scouting combine.

And on Saturday, it was the defensive players putting on a track meet.

Linebacker Isaiah Simmons completed the 40-yard dash in 4.39 seconds — matching the time put up the fastest running back in Indianapolis, Jonathan Taylor, and faster than all but six receivers. The 238-pound Simmons, who played at Clemson, likely cemented himself as a top 10 pick in the April draft.

How fast was he? Simmons opted against taking a second attempt.

Only two other linebackers were ran sub-4.5s. Willie Gay Jr., of Mississippi State, posted a 4.46 and Davion Taylor, of Colorado, had a 4.49.

Simmons wasn't the only one turning heads.

Three defensive linemen finished the 40 with times under 4.70. James Smith-Williams of North Carolina State ran a 4.60, Jabari Zuniga of Florida was clocked at 4.64 and Alton Robinson of Syracuse posted a 4.69.

The bigger linemen were even more impressive.

After weighing in at 308 pounds, Khalil Davis of Nebraska ran a 4.75. Meanwhile, 304-pound Neville Gallimore, the second Canadian to play at Oklahoma, had a 4.79.

Davis also posted the second-best bench press total among defensive linemen, completing 32 reps at 225 pounds. Davon Hamilton of Ohio State and had the top mark for the big men with 33 — the fourth highest total of the week.

Patrick Queen of LSU pulled up on his second attempt with what appeared to be an injured hamstring after putting a 4.50-second 40 on the board. And Kenneth Murray, of Oklahoma, stopped on his second run after clocking a 4.52. Murray also is believed to have hurt his hamstring.

NFL Network also reported another possible first-round pick, receiver Laviska Shenault Jr. of Colorado, plans to have surgery on the injured core muscle that bothered him all season.

Defensive backs will work out Sunday —- the fourth and final day of the combine.