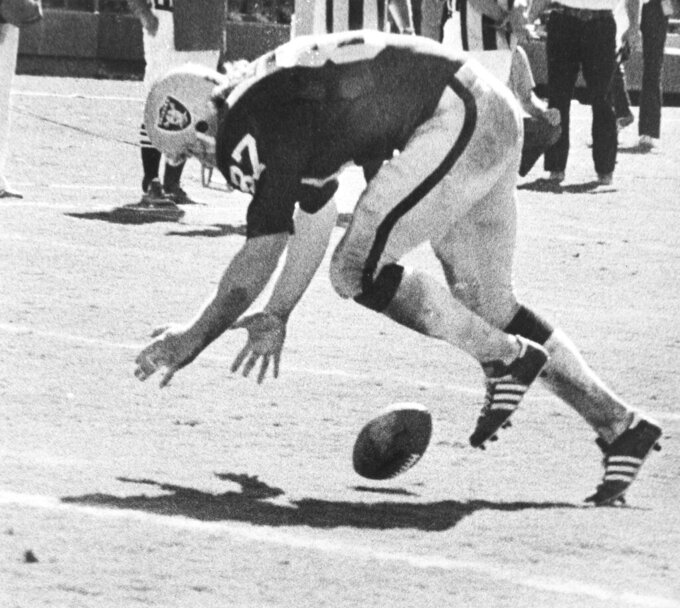 FILE - In this Sept. 11, 1978, file photo, Oakland Raiders tight end Dave Casper reaches for the tumbling football a moment before it rolled into the end zone and he fell on the ball for the game-winning score in the final minute of play against the San Diego Chargers, in San Diego. With nowhere to throw the ball, Raiders quarterback Ken Stabler either fumbled or pushed the ball forward on purpose, depending on which side of the rivalry is telling the story. Teammate Pete Banaszak then knocked the ball further ahead from about the 13-yard line as it rolled toward the end zone. Tight end Dave Casper kicked the ball forward at the 5 and then fell on it in the end zone with no time remaining. (Thane McIntosh/The San Diego Union-Tribune via AP, File)

“I got lucky,” Casper said of the recovery as time ran out. “Sure, I helped the ball along into the end zone. I saw the fumble come out of the pile.”

The play that killed the Chargers came when defensive end Fred Dean hit Stabler as the Oakland quarterback was trying to pull out a last-gasp victory.

The ball squirted loose and bounced into the end zone where Casper fell on it to tie the game as the gun sounded. Errol Mann then kicked the winning conversion among raging Chargers’ players yelling foul.

“It was a terrible game to lose,” said San Diego Coach Tommy Prothro. “I thought we played well, but they got a lot of big plays on us. It’s a long season and we’ve got a good football team. We’ve got the character to come back.”

Referee Jerry Markbriet said Prothro protested that the fumble had been thrown forward and batted illegally by Casper. “I ruled it a fumble,” said Markbriet.

After the game, Stabler said he fumbled intentionally.

There were 10 seconds left and the Raiders had the ball at the Chargers’ 14-yard line when the final play began.

Stabler engineered an 81-yard, eight-play drive in the closing moments to give the Raiders their second touchdown of the fourth quarter and their first victory of the season. Both teams are 1-1.

Stabler pulled the Raiders to within six points with 8:26 left in the game when he hit Morris Bradshaw with a 44-yard bomb, which made it 20-14. Earlier, running back Hank Bauer scored on runs of 6 and 1 yards and quarterback Dan Fouts hit tight end Pat Curran with a 14-yard touchdown pass that deflected off the hands of Oakland safety Mike Davis to give the Chargers their first lead.

The Raiders’ first touchdown pass came when Stabler rifled a 6-yard pass to Casper in the second quarter.

Bauer’s second touchdown came with 12:42 remaining and gave the Chargers what appeared to be a safe 20-7 lead. It was the only scoring of the second half until the Raiders struck with their two decisive touchdowns.

The difference in the end was Stabler, who despite being sacked four times and intercepted three times and fumbling on the final play, completed 15 of 35 passes for 307 yards.

Running back Lydell Mitchell saw extended action for the first time since last season. Mitchell, acquired by the Chargers from the Baltimore Colts shortly before the regular season, gained 38 yards on nine carries and had one reception for a loss of five yards.

The Chargers broke a scoreless tie on the first play of the second quarter when Fouts drilled a pass into the Oakland end zone from the Raiders’ 14-yard line. The ball bounced off the hands of Raiders’ safety Mike Davis and into the hands of Curran.

Oakland struck back immediately, with Stabler hitting Cliff Branch for a 41-yard gain and Casper for 44 yards two plays later to set up the 6-yard TD pass to Casper.

The difference in the game was a missed extra point by Rolf Benirschke after San Diego’s second touchdown. Benirschke, who came into the game with 13 consecutive field goals, saw his streak come to an end when he missed a 28-yarder in the first quarter.