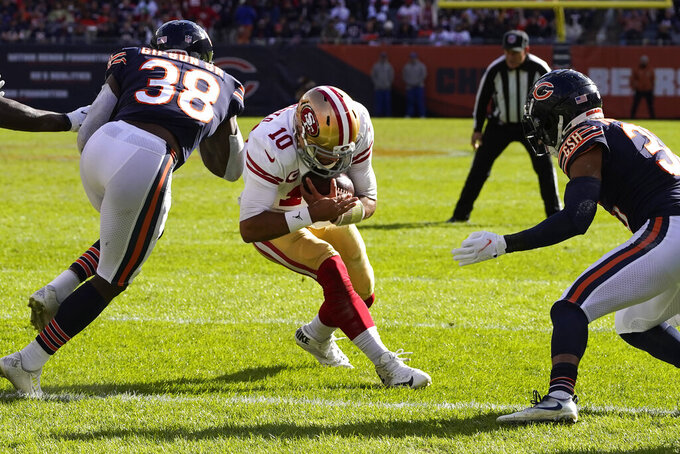 San Francisco 49ers quarterback Jimmy Garoppolo puts his head down and scores between Chicago Bears safety Tashaun Gipson (38) and DeAndre Houston-Carson during the second half of an NFL football game against the Chicago Bears Sunday, Oct. 31, 2021, in Chicago. (AP Photo/Nam Y. Huh)

LAKE FOREST, Ill. (AP) — Chicago Bears quarterback Justin Fields describes a higher sense of confidence in his own game after a 33-22 loss to San Francisco when he produced several highlight reel-type plays.

It doesn’t hurt having several key components rejoin the team to lend a hand.

Bears coach Matt Nagy is back working at Halas Hall this week after being away and missing the last game because of COVID-19, while running back David Montgomery is practicing after four weeks away with a knee injury.

Now it's possible Fields could settle in with all hands on deck Monday night at Pittsburgh.

“I just feel like comfortable like all around, just more confident in myself, and just going out there and making plays and stuff like that,” Fields said Thursday. "I’m not sure like one specific area. I’m hoping all the areas.

“I just feel way better just in terms of my confidence and my command of the huddle and of the offense and kind of telling those guys where to go.”

Fields turned a spinning, cutting fourth-and-1 scramble into a 22-yard touchdown and threw a pinpoint TD pass on the run to his left to diving tight end Jesse James. Yet he still couldn’t help the Bears avoid a third straight loss.

Watching the game on a television in a hotel room while quarantined from his team and family, Nagy saw a big-play threat who can allow his struggling offense to overcome poor down-and-distance situations.

“Same thing when it's a bad play. If something doesn’t happen the right way he doesn’t let it affect him, and if you have that you want that, especially at the quarterback position.”

What Fields hasn’t done yet to a real extent is start connecting with wide receiver Allen Robinson, who had 200 receptions the past two seasons. Robinson has only one game with more than four receptions this year, and that was in the opener before Fields became the starter. Robinson has 26 catches for 271 yards and a touchdown, but thinks it’s starting to become more instinctive between the two.

“It’s something that as you kind of progress and run certain routes or see certain things, they just start to become more of a feel rather than you seeing and reacting,” Robinson said. ’You can kind of see it and feel it before it happens, and then it happens.”

The addition of Montgomery to face T.J. Watt, Cam Heyward and the Pittsburgh defense would be huge if the team deems him ready. They activated his three-week window to consider his return this week from injured reserve.

Khalil Herbert has gained the Bears rushing lead for the year with 351 yards on 81 carries, but Montgomery (69 carries, 309 yards) is the better all-around threat.

Nagy said Montgomery would automatically become the starter if ready.

“David’s an offensive leader,” Fields said. “He’s a vocal leader. He’s a hard worker. He’s a hard runner, so of course we’re glad to have him back this week, and I’m assuming that he’s not going to skip a beat just based on how hard he works. So I know he was working hard to get back out there on the field and I’m excited for both of those guys.”

Herbert surprised with his hard running as a rookie in Montgomery’s absence, and the Bears rank fifth in rushing. They’ll need both to help avoid a fourth straight loss.

“Both of those guys are weapons,” Fields said. “They could both run the ball hard and they could both block and catch the ball out of the backfield, so I’m excited.”

NOTES: Outside linebacker Khalil Mack (foot), safety Eddie Jackson (hamstring), tight end J.P. Holtz (concussion), linebacker Alec Ogletree (ankle) and running back Damien Williams (knee) were held out of practice. ... Nagy actually returned to work on Tuesday. He said he watched the game in isolation. He took part in practices and meetings during the week via Zoom, but is glad to be back. “I got Zoom and it’s good, it saved me," he said. “But I’m kind of done with it.” ... In the light of Green Bay's Aaron Rodgers contracting COVID-19 after failing to admit he hadn't been vaccinated, Fields volunteered the information that he has been vaccinated.