Fields' status for Bears still in question with Packers next 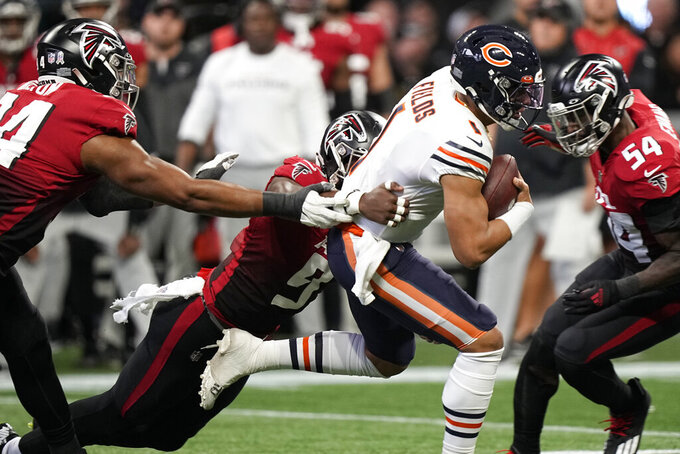 Chicago Bears quarterback Justin Fields (1) runs against the Chicago Bears during the first half of an NFL football game, Sunday, Nov. 20, 2022, in Atlanta. (AP Photo/Brynn Anderson)

LAKE FOREST, Ill. (AP) — Justin Fields threw lightly on the field prior to the Chicago Bears' game last week, hoping he would be able to play through an injury to his nonthrowing shoulder after being listed as questionable on the team's final report.

It didn't work out that way.

Whether Fields will be ready to play when the Bears host Aaron Rodgers and the rival Green Bay Packers after sitting out last week's 31-10 loss at the New York Jets remained in question on Wednesday.

“I just want to make sure that I can do everything I need to do to play a game. I’ll know in practice,” Fields said prior to practice.

Fields, who's been turning heads in his second season, separated his left shoulder and suffered some ligament damage in the AC joint when he was tackled on a designed run late in Chicago's loss at Atlanta two weeks ago. He participated in practice on a limited basis leading up to the game at New York and was limited again on Wednesday.

Fields said his injury is improving, but it remained to be seen if he will be healthy enough to play this week.

The Bears (3-9) have a bye following the game against Green Bay that could give him extra time to recuperate. But he and coach Matt Eberflus insisted that won't factor into the decision this week.

“If he feels really comfortable and feels great and his mobility and strength’s back for the medical staff. And then as a GM and head coach, we look at it and say ‘hey, green light,’ then it’s a green light. So we’ll see it during the course of the week. But this is on a one-week thing, day to day for this week.”

If Fields isn't available, the Bears might have to go with third-string quarterback Nathan Peterman. They were about to do that last week.

The Bears announced Peterman would start after backup Trevor Siemian strained an oblique in warmups. Siemian gritted through the injury. The veteran did not practice Wednesday and his availability is in question.

The uncertainty at quarterback led to the Bears signing Tim Boyle to the active roster from Detroit's practice squad. He has experience with offensive coordinator Luke Getsy from their time with Green Bay.

Against the Jets, Chicago wasn't the same without Fields.

The Bears struggled to keep drives going, converting just four of 13 third downs after averaging about 30 points the previous five games. They lost their fifth in a row.

Fields has been on a spectacular run after a slow start with the Bears calling more designed carries. The former Ohio State star leads all quarterbacks and ranks seventh overall with 834 yards rushing. He is averaging 6.8 yards per carry — second in the NFL.

But while the Bears have shown they can run the ball whether Fields is playing or not, they still need to improve their struggling passing game. And they'll have to do it without their top receiver after Darnell Mooney suffered a season-ending ankle injury last week.

Mooney leads Chicago with 40 receptions and 493 yards. No other wide receiver has more than 14 catches or 195 yards for Chicago this season.

Mooney's absence could create more opportunities for Byron Pringle and Chase Claypool. Pringle, who caught his first touchdown of the season last week, has been limited to six games because of a calf injury in his first year in Chicago. Claypool had his best outing since a trade from Pittsburgh on Nov. 1, with catches of 31 and 20 yards.

“Justin’s a great quarterback and he knows what each receiver is capable of doing when their number is called upon," Pringle said. "He’s just going to go out there and execute and go through his reads and everybody will take advantage of their opportunities when they come their way.”