Finau gets a call during Masters delay, from Tom Brady 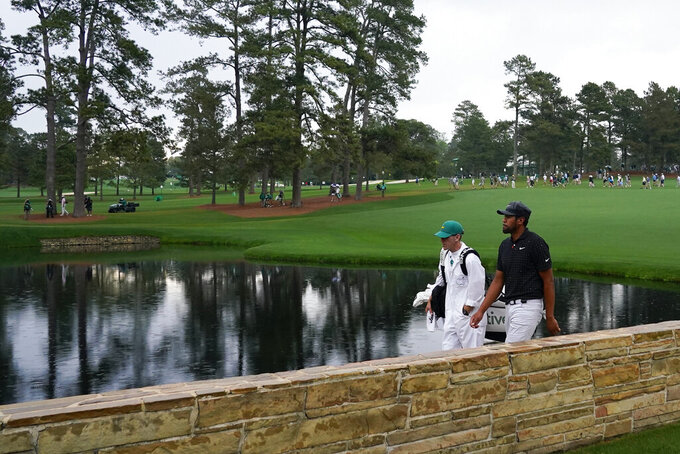 Tony Finau walks across the Sarazen Bridge with his caddie Mark Urbanek on the 15th hole during the third round of the Masters golf tournament on Saturday, April 10, 2021, in Augusta, Ga. (AP Photo/Matt Slocum)

AUGUSTA, Ga. (AP) — Cell phones are almost entirely forbidden at Augusta National, so imagine Tony Finau’s surprise Saturday when he got told during a weather delay that someone wanted to talk with him.

It was a FaceTime call.

Here’s what happened: Play was suspended around 4 p.m. because of dangerous weather in the area, and Finau went to the caddie house to wait for the resumption of play. That’s when Jimmy Dunne, an Augusta National member, just happened to be on the phone with Brady — the seven-time Super Bowl winning quarterback, the most recent of those coming earlier this year with the Tampa Bay Buccaneers.

Dunne approached Finau and said, “somebody wants to talk to you.” Somebody was Brady.

“That was a pleasant surprise,” Finau said. “He said ‘great playing,’ and he’s following. He said he’s surprised we stopped. He said, in the NFL, ‘When it rains, we don’t stop.’ I said, ‘Maybe we’re not as tough as you guys,’ and he said, ‘No, that’s not the case.’ We had a good laugh about that.

“He was giving me some crap about the weather and why we stopped. He was obviously watching, and that was cool he was following.”

Brady is a big-time golfer and golf fan. He played last year in “The Match: Champions for Charity,” teaming with Phil Mickelson against Tiger Woods and Peyton Manning. The made-for-TV event raised $20 million.

“Alex is one of my good friends and someone I’ve known for a little bit,” Finau said. “That’s kind of how we met in Boston when he was playing for the Patriots, and this is only the second time we’ve had a conversation.”

Finau is a big football fan, but never was a serious player. He was asked if Brady, who has been known to recruit a free agent or two, asked him about joining the Bucs.

“He’s got plenty of weapons over there in Tampa,” Finau said. “They’re not going to need me.”