Fit and ready, Rams' Whitworth back for another season at 38 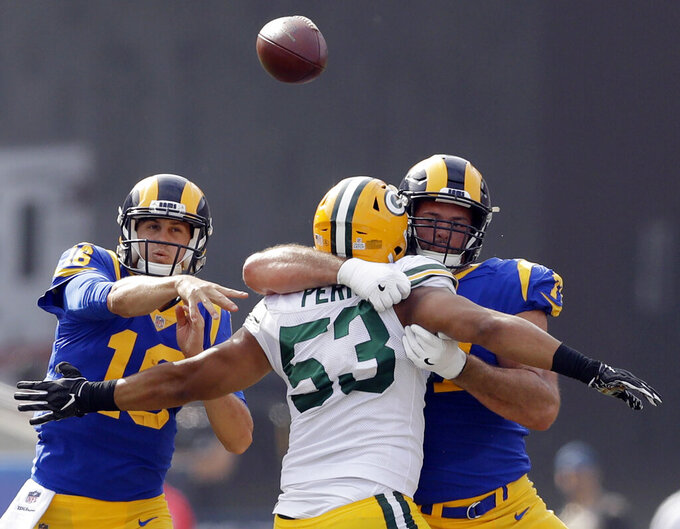 FILE - In this Oct. 28, 2018, file photo, Los Angeles Rams quarterback Jared Goff, left, throws a pass as offensive tackle Andrew Whitworth, right, blocks Green Bay Packers' Nick Perry (53) during the first half of an NFL football game in Los Angeles. Not many offensive linemen in NFL history can match Whitworth's high-level longevity — not even those who dominated the left tackle position when Whitworth was coming up. (AP Photo/Marcio Jose Sanchez, File)

THOUSAND OAKS, Calif. (AP) — Andrew Whitworth gets the needling phone calls and texts regularly from his friends. They're all wondering why their 38-year-old buddy is still strapping on pads and a helmet in the California summer heat instead of joining them on the shady nearby golf courses.

The Los Angeles Rams' stalwart left tackle is clearly right where he wants to be for as long as he can stay.

“It’s exciting to be out here,” Whitworth said after the start of his 15th NFL training camp. "It’s exciting to get a chance to compete. Obviously, it's been a crazy year, and all of us are just amped up to have this opportunity to try and get football off. I think it just makes you appreciate it so much more. It’s been fun so far.”

Whitworth had plenty of reasons to consider retirement when he wrapped up his three-year contract with the Rams last winter. His wife and four kids occupy almost every minute he's not spending on the links, and he has already had a successful NFL career in Cincinnati and LA, even realizing his dream of playing in the Super Bowl two seasons ago.

But Whitworth has been the anchor of coach Sean McVay's offense since they arrived on the West Coast a few months apart in 2017. Once he decided to play again, the Rams didn't hesitate to re-sign their highly experienced left tackle for at least another year, particularly after he recovered well from ankle surgery.

“I think with some of the things that he got cleaned up, he looks as healthy as he’s been since we’ve been together, which is a very, very impressive thing,” McVay said. "You’re not surprised by anything from him at this point.”

Not many offensive linemen in NFL history can match Whitworth's high-level longevity — not even those who dominated the left tackle position when Whitworth was coming up.

“I say this as humbly and respectfully as I can: I think I’ve outlasted most of them,” Whitworth said with a laugh.

Whitworth is right: Seattle's Walter Jones played his final game at 34, as did Rams Hall of Famer Orlando Pace. Willie Roaf played until he was 35, while Jonathan Ogden and Cincinnati's Willie Anderson were both done at 33.

Whitworth's four Pro Bowl selections are among the fewest in that group, but all four of those nods came after he turned 30 — and that's also when his two teams became consistent winners after the Bengals largely struggled during his 20s. Whitworth was always good, but when his teams got good, he looked even better to Pro Bowl voters.

There are many elements to his longevity, but the 6-foot-7 Whitworth sees weight management as among the most important. He weighed around 350 pounds on the field at the start of his career with the Bengals, but after he turned 30, he dedicated himself to reporting to camp a bit lighter each year, preserving his mobility while counting on his experience to make up for that slight decrease in bulk.

“Honestly, one of the reasons I'm able to play at the age I am now, when I was a young tackle in the NFL, I observed those guys, listening to them and how they trained and did things, and I always thought they could have done a little better job of taking their weight down and taking care of themselves when they got a little older to make themselves last,” Whitworth said.

So Whitworth meticulously maintained his gradual weight loss — until this summer, anyway.

“I actually reported a little heavier than normal,” Whitworth said. “But that’s really just because, like everyone else, I had nothing to do all offseason but train, so I had put a lot of work in the weight room.”

Whitworth is a smart worker in practice as well, typically taking a day off each week during the season to rest. He knows McVay's offense inside-out, so he can preserve his energy for the Sundays and family days that matter.

“My ideal day is I usually fall asleep because I just don’t have anything else left in the tank,” Whitworth said. "That’s how I like to do it. I like to be outside all day. I don’t watch much TV or really ever sit down on the couch. I get a little too busy for that.”

Whitworth's smart energy expenditure happens on the field, too. He broke up a fight between two young teammates in practice earlier this week, and he also gave them a little advice.

“Those guys, they get mad at each other," Whitworth said. "And then they realize about three minutes later, that’s why you don’t fight at practice — because you’re exhausted for the rest of the day."

NOTES: The secondary looked sharp during practice drills at the Rams' training complex. Cornerbacks Jalen Ramsey and Darious Williams made highlight-reel plays, and rookie defensive backs Terrell Burgess and Jordan Fuller also came up big. ... A few mistakes by the offense left McVay annoyed with his unit. “We had a lot of guys that panicked, frankly,” McVay said of the offense's performance in a 2-minute drill. “That's something that will not be tolerated.” ... S Taylor Rapp is still watching from the sidelines with a knee injury.