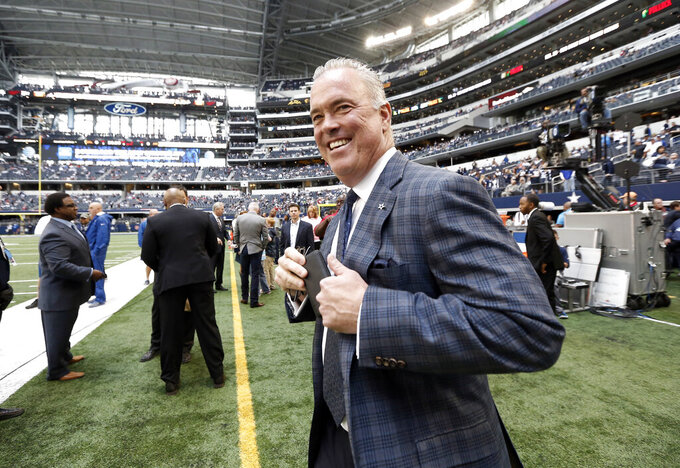 FILE - In this Nov. 2, 2014, file photo, Dallas Cowboys' Stephen Jones, executive vice president and director of player personnel, walks on the field before the first half of an NFL football game against the Arizona Cardinals in Arlington, Texas. The cancellation of college football games will have a far more significant impact on the NFL beyond giving the league an opportunity to play Saturday games this fall. (AP Photo/Brandon Wade, File)

The cancellation of college football games will have a far more significant impact on the NFL beyond giving the league an opportunity to play Saturday games this fall.

Evaluating players for the draft will be among the biggest challenges.

“I think until you understand exactly what the landscape is going to be then you, a little bit, have your hand tied behind your back,” Dallas Cowboys executive vice president of personnel Stephen Jones said. “But, at the same time, I think we’re going to have to be prepared to go back on the tape from last year on some of these players because the way it’s headed right now, some of these schools may not play.”

The Big Ten and the Pac-12 announced Tuesday they aren’t playing this fall. Both leagues and many smaller conferences are aiming for the spring if the coronavirus subsides.

The remaining Power Five conferences — the Southeastern, Atlantic Coast and Big 12 — are still planning to kick off the season next month, though the virus could force them to cancel.

“It’s going to be interesting, it’s going to be a challenge,” Jones said. “Just like we did in the draft, I think our personnel people are going to embrace this and figure out how to do it. If we have some conferences playing and others are not, then we’ll have to have a strategy that addresses the players on the teams that don’t play football this year versus the teams that do.

Many college players who don’t play won’t have an opportunity to improve their draft stock. Even a showcase game or a few won’t be the same as a full season.

Joe Burrow became the No. 1 pick in the draft after throwing 60 touchdown passes and winning the Heisman Trophy. He suggested he’d be looking for a different career if he didn’t play last season. Burrow had a decent junior season for LSU after transferring from Ohio State. His breakout senior campaign earned him a fully guaranteed four-year, $36.19 million contract from the Cincinnati Bengals.

“I feel for all college athletes right now. I hope their voices are heard by the decision-makers. If this happened a year ago I may be looking for a job right now,” Burrow wrote on Twitter.

The timing of college all-star games in January, the NFL scouting combine in late February and the draft scheduled for April 29-May 1 also could be impacted by cancellation and postponement of college games. A league spokesman declined comment Thursday when asked if the NFL would be willing to move some of those events to accommodate changes to the college football schedule.

The draft can be pushed back to as late as June 2, according to the current collective bargaining agreement. The league would need approval from the NFL Players Association to move it back any further.

Teams and their scouting departments are moving forward and preparing to deal with various scenarios.

“We have to be flexible because things will change,” Green Bay Packers general manager Brian Gutekunst said. “There’s going to be a draft. We have to acquire players. We just have to do it a few different ways.

“We’ve had contingency plans and talked through some things and how we’re going to approach everything if that were the case. Really disappointed for those kids. It’s a tough thing. Some of these guys may never get a chance to play football again. It’s different than other sports. There’s no pickup football games.”

Seattle Seahawks coach Pete Carroll, who previously led USC for nine seasons before returning to the NFL, put it in proper perspective.

“During these times, you don’t get everything that you’re used to. This is not what this time is about,” Carroll said. “This time is about enduring and standing up to the challenges of it, keeping a great mind-set, mentality so that you can make it through it and help the people that need the help. And a good deal of that is not doing what you normally get to do. ... This thing we’ll get through it eventually.”

Meanwhile, the NFL pushes ahead with plans to play a full schedule. The league could even move some games to Saturdays to potentially bring in more television revenue, helping overcome some of the economic losses from playing in empty stadiums.