On Football: NFL coaching carousel about to start spinning 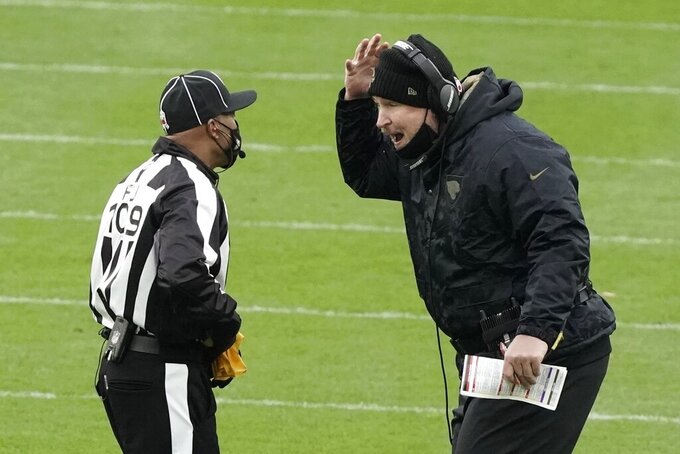 Jacksonville Jaguars head coach Doug Marrone argues a call with side judge Dyrol Prioleau (109) during the second half of an NFL football game against the Green Bay Packers Sunday, Nov. 15, 2020, in Green Bay, Wis. The Packers won 24-20. (AP Photo/Morry Gash)

Three NFL coaching jobs already are open, and another three or four soon could be. While it happens every year, coaching searches are different depending on the team seeking a new guy to take charge.

Some clubs seek a veteran pro coach, like Washington and Dallas did after last season with Mike McCarthy and Ron Rivera. Others look to rising assistants and coordinators — the Giants' Joe Judge and the Browns' Kevin Stefanski fit there.

Or NFL teams turn to the college ranks, which Carolina did for Matt Rhule, who was coveted by several other franchises, too.

The league hopes more minority coaches get a shot at the openings in Houston and Atlanta, where coincidentally, African Americans Romeo Crennel and Raheem Morris currently are the interim coaches. It even has expanded the Rooney Rule designed to provide more opportunities for minority candidates for coaching, general manager and other executive positions.

Most important, of course, is finding the right fit.

“The biggest thing is can you get everyone on board with how you want to do things, or do you have to fit into how they do things,” Hall of Fame coach Tony Dungy says. "The biggest issue in Dallas, for example, there is a culture there you might not be able to change a lot about it because it is already set. Think back to Oakland when Al Davis was alive. He mostly didn’t hire people from outside, and when he did, with Mike Shanahan it didn't go well. When he hired Jon Gruden, it didn't go well at first.

“So those are talks you have to have as a head coach going in.”

Talks already have begun for the Texans, Falcons and Lions. Soon, we can expect the Jets to be done with Adam Gase and the Jaguars to release Doug Marrone. Two AFC West openings are possible if the Chargers part with Anthony Lynn and the Broncos dismiss Vic Fangio.

Then there can be the surprises, with a coach stepping aside unexpectedly. Might Andy Reid look to retire should the Chiefs, right now the NFL's best team, repeat as Super Bowl champions? Does Bill Belichick not relish the rebuilding job ahead in New England now that the Patriots are also-rans with Tom Brady in Tampa?

As we close in on the conclusion of a pandemic-impacted 2020 season, here's a look at the three teams on the coaching carousel, and the two most likely to jump aboard in early January.

One of the most disappointing teams this season, the Texans fired Bill O'Brien, by far their most successful coach, after an 0-4 start. O'Brien was sent packing as much for his failures as a general manager — who didn't think the trade of DeAndre Hopkins to Arizona would backfire for Houston? — as his coaching struggles.

The Texans have superb Deshaun Watson at quarterback. He doesn't have nearly enough help, though, and the merry-go-round of roster changes hasn't helped. Despite having J.J. Watt healthy and playing pretty well, the defense is a mess.

Houston's best route could be a defense-minded head coach who hires an imaginative offensive coordinator.

There's loads of talent on offense, though signing Todd Gurley has not worked out well. Matt Ryan remains a solid quarterback and Calvin Ridley has emerged as a top receiver. But the O-line has been spotty (to be kind).

Another team with defensive issues, the Falcons need a major upgrade in the secondary and the pass rush. Morris has done a good job in getting things upright, though Atlanta is very fragile in close games.

Like in Houston, a defense-oriented head coach such as San Francisco's Robert Saleh makes sense. But so did Dan Quinn, and the Falcons fell apart after their Super Bowl collapse.

You have to feel for Matthew Stafford, a real trouper who has been undone by mismanagement as much as poor coaching. Whether he is still in Detroit in 2021 or elsewhere, the Lions would be wise to find someone with NFL head coaching experience.

Of course, that's what they had in Jim Caldwell, who went 36-30 in four seasons. Matt Patricia was 13-29-1 before being canned last month.

Don't laugh, but this is an attractive job. Yes, the Jaguars have hit rock bottom under the direction of Tom Coughlin (fired last December), Dave Caldwell and Marrone. They likely will have the No. 1 overall draft choice — Hello, Trevor Lawrence — and have tons of salary-cap room. There's a nice base of young players.

The Jags could go in several directions for a coach, and seeing them turn to a top college guy like Rhule would not be a surprise. But such top pro offensive assistants as Kansas City's Eric Bieniemy, Seattle's Brian Schottenheimer and Buffalo's Brian Daboll would make sense.

Gase's two-year stint began with a 7-9 season in which the Jets and QB Sam Darnold made late strides. Then 2020 became a debacle in which the team has looked rudderless, Darnold has stagnated or regressed — it's difficult to tell given all his injuries — and the talent base has shrunk significantly. Even the Jags seem to have a stronger roster.

The Jets would be wise to turn to a former NFL head coach with a pedigree; no, we didn't say Jim Harbaugh, who likely is not abandoning Michigan. They need a QB guru, too, and someone who can handle the, uh, complications that come with working for this organization.

And, thanks to actually winning a game, Lawrence almost certainly is not on the way.