On Football: Opt outs should not have doubts or a deadline 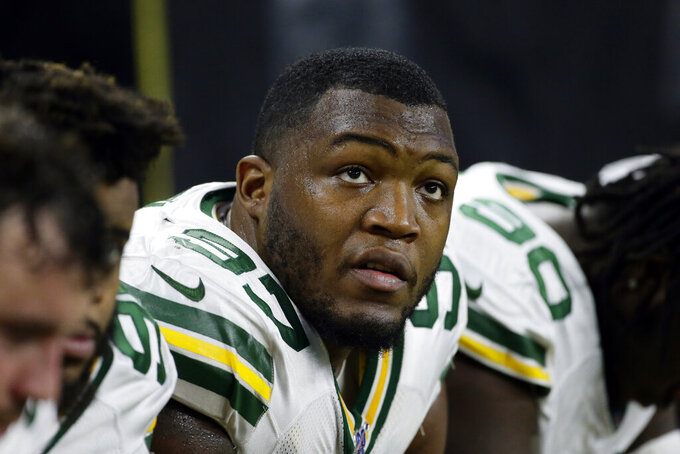 FILE - In this Dec. 29, 2019, file photo, Green Bay Packers nose tackle Kenny Clark (97) watches from the sideline during the second half of an NFL football game against the Detroit Lions in Detroit. Packers defensive tackle Kenny Clark admits he's surprised at how many players are passing on 2020. Although he is not considering it, he understands why the number of NFL opts outs surpasses the total for Major League Baseball, the NHL and NBA combined. (AP Photo/Duane Burleson, File)

What seemed like a simple enough process of players deciding whether to skip the 2020 NFL season due to the coronavirus pandemic has turned into a major story.

It's a story that will affect team makeups and, perhaps, the relative peace the clubs and players' union had reached.

The latest contentiousness has been over the deadline for opt outs. It originally was Monday, but pending signing of the changes to the labor agreement the NFL and the NFL Players Association reached to get training camps opened. Otherwise, the deadline would be pushed back to seven days after the agreement became official.

That hasn't occurred yet, and star Patriots safety Devin McCourty accused the league of playing games with the deadline, targeting it for Wednesday.

“I think it’s an absolute joke that the NFL is changing the opt-out period, mainly because they don’t want to continue to see guys opt out,” he said. “I’m sure they’re shocked about how many guys have opted out. But it’s the same thing when we sign a (collective bargaining agreement), sometimes some of those things that we think are good sometimes backfire.

“So to act like guys are making a decision based on something other than virtual meetings is a joke. But I think it’s something that we go through as players, and when players understand how much power we have, we’ve seen things change. Primarily on this deal with the COVID-19 and trying to get everything back we saw some of that strength."

Thus far, nearly four dozen players have decided to skip the upcoming season, with New England far and away impacted the most with eight opt outs. The theory that Bill Belichick can plug in players and win will be tested severely with so many Patriots walking away for 2020, including starting linebacker Dont'a Hightower, safety Patrick Chung and tackle Marcus Cannon.

Other teams facing huge challenges are the Super Bowl champion Chiefs without running back Damien Williams and guard Laurence Duvernay-Tardif; the Jets with linebacker C.J. Mosley declining to play; the Broncos minus tackle Ja’Wuan James and defensive tackle Kyle Peko; and the Eagles without newcomer WR Marquise Goodwin, who was expected to provide a significant downfield boost.

But this should not be about roster deletions; it's about health and safety. For players and their families. For coaches — two have tested positive for COVID-19, Sean Payton of New Orleans in March, Doug Pederson of Philadelphia this week — and trainers and all other team personnel.

While it's understandable that team management seeks to know who will be on hand for the season, it also needs to recognize that in such a volatile health environment, opting out ought to be a consideration at any time.

Packers defensive tackle Kenny Clark admits he's surprised at how many players are passing on 2020. Although he is not considering it, he understands why the number of NFL opts outs surpasses the total for Major League Baseball, the NHL and NBA combined.

“It’s a lot of players opting out," Clark says. "You go back and you think about it, everybody is going through different things. I know a lot of guys have kids and all that kind of stuff. I don’t know how that feels yet, I don’t have any kids. My family, they’re pretty healthy. A lot of guys are just living in different situations. They got a lot of people living with them and they don’t want to bring that stuff to their kids and to their loved ones. I totally understand that.

“That’s just the crazy part about it. You just don’t know, man. You don’t know what somebody else is going through.”

What all sports are going through, from those that have had successful restarts such as NASCAR and the PGA Tour to the struggles of MLB, is an unprecedented level of uncertainty. Pro football is at the very beginning of a journey whose outcome in some ways is dependent on forces it can't control.

And no coach or player can ever be comfortable with that.

Given the requirements of the sport, then, as well as the unpredictability of the coronavirus, should there even be an opt-out deadline?

Rams coach Sean McVay notes the “different approaches” for each player, and the need for each team to “have that clear, open and honest dialogue with those guys.” He's correct — that's essential.

“A lot of these guys that you’ve seen opt out, their family and things like that, those are things you would never question," McVay says. "It’s about putting your arm around guys. And in a lot of instances, it’s about being empathetic and understanding and making sure they know we support them.

“I also think it’s our job to provide them with the right resources and the right information to make an educated decision based on all the medical parameters.”

Regardless of when that decision comes.