Football's in his blood, but basketball in Caroline's heart 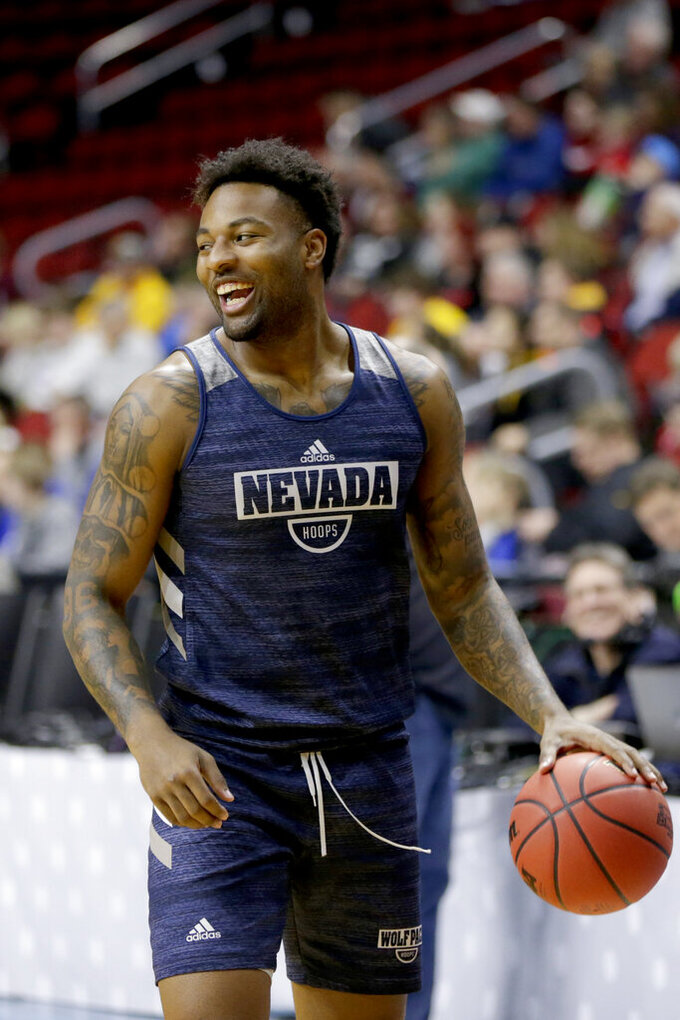 Nevada's Jordan Caroline smiles during team practice ahead of a first round men's college basketball game against Florida in the NCAA Tournament in Des Moines, Iowa, Wednesday, March 20, 2019. At 6-foot-7 and 235 pounds, Jordan Caroline has a football player's build just like dad. The son of former NFL defensive end Simeon Rice, and grandson of ex-Chicago Bear J.C. Caroline is making a name for himself as Nevada's top scorer and rebounder. (AP Photo/Nati Harnik) 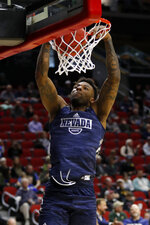 DES MOINES, Iowa (AP) — Sometimes Jordan Caroline feels as if he is asked as much about the sport he doesn't play as the one he does.

Nevada's star forward understands. His dad is former NFL defensive end Simeon Rice, and his grandfather, J.C. Caroline, is in the College Football Hall of Fame.

"Every time I do an interview somebody asks about that," Caroline said Wednesday. "At this point, I've gotten so used to it, I expect it. I know it's coming."

At 6-foot-7 and 235 pounds, Jordan Caroline could pass for a football player. Thing is, he's never had much interest in the sport. No one would argue he made the right call when he decided to get serious about basketball in eighth grade.

Caroline is the second-leading scorer and top rebounder as the seventh-seeded Wolf Pack (29-4) head into their NCAA Tournament opener against 10 seed Florida (19-15) on Thursday at Wells Fargo Arena.

Caroline, a two-time All-Mountain West first-team pick, has been a matchup nightmare since he arrived in Reno after transferring from Southern Illinois following his freshman year. He's a force inside, yet he also is an outside shooting threat. He is one of four active Division I players with 2,000 points and 1,110 rebounds, and his 45 double-doubles in three seasons is a conference career record.

"He came to us as an undersized (center) at his prior university and this year he's been a small forward for us," coach Eric Musselman said. "Last year, he was guarding Mo Bamba (of Texas) and fronting him at his size and battling for rebounds."

Caroline has been a steady presence this season, averaging 17.3 points and 9.6 rebounds. He missed the Mountain West tourney semifinal loss to San Diego State last week because of a sore Achilles tendon. He said he is fully recovered and will play against the Gators.

Caroline grew up near the University of Illinois campus in Champaign, where his father and grandfather excelled on the football field.

Rice was a two-time All-American who set the Big Ten career sacks record, and he played 12 seasons in the NFL. He was rookie of the year honors in 1996, and he won a Super Bowl with the Tampa Bay Buccaneers. J.C. Caroline led the nation in rushing in 1953 and played mostly defensive back for the Chicago Bears from 1956-65. One of his notable accomplishments was intercepting Johnny Unitas' first career pass and running it back for a touchdown.

Jordan Caroline said he didn't have much contact with his father until he was in high school. Rice attended Nevada's senior night, and Jordan said he'll be on hand for the game Thursday.

Jordan was extremely close with his grandfather, who died in 2017.

"He was like a superhero," he said. "I have a little son named after him. He was the biggest role model I had growing up and I was inspired to be like him. He really was my everything growing up."

Of course, he knows all about his grandpa's football exploits.

"I saw some old grainy footage from the 1950s," he said. "He scored a touchdown a couple times. I never saw a full game. He was fast. Really fast."

He did play football for fun and spent some time on his high school freshman team until he got hurt and decided to quit. Jordan said he never felt any pressure to play football.

"They always said to do whatever you want to do; put your best foot forward and do it," he said.