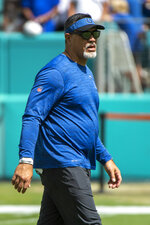 Pittman knows few players are fortunate enough to learn the art of route-running from someone whose career numbers — 1,070 receptions, 14,345 yards and 82 touchdowns — rank among the league's best.

He understands Wayne is one of the city's most beloved athletes, and Pittman fully expects the three-time Hall of Fame finalist will celebrate one day in Canton, Ohio.

Until then, maybe especially then, Pittman will consider himself the lucky one.

“Reggie is not like any coach I've ever had,” he said. “Because he played and he played very well, he understands the game outside of what a normal coach understands. Lots of coaches didn't get to play pro, so they don't really understand the ins and outs. Reggie understands everything.”

It's one reason Colts coach Frank Reich kept offering Wayne a job and why Reich now leans so heavily on former players.

He knows guys with solid career resumes, established leadership skills and relatively recent NFL experience add instant credibility to a locker room because he was once that guy.

Reich served as the backup to Hall of Fame quarterback Jim Kelly on all four of Buffalo's AFC championship teams in the early 1990s. The Colts gave him a pathway into coaching in 2006.

He returned the favor last year by hiring Hall of Fame center Kevin Mawae and this year he brought in three former Colts — Wayne, linebacker Cato June and safety Mike Mitchell. For Wayne and Mitchell this is their first full year coaching and both have been welcome additions.

“We've got a lot of young safeties he (Mitchell) can teach because he's made plays in this league, he knows what works,” said cornerback Stephon Gilmore, the NFL’s 2019 Defensive Player of the Year. “Like I say all the time, if you've got that experience, it's always easy to teach.”

At least, that's how players see it.

While Wayne, Mawae and Mitchell were all top-50 draft picks, June was a sixth-rounder. Each became established starters. June and Wayne were even teammates on Indy's Super Bowl-winning team.

But this highly touted quartet doesn’t want to be defined by credentials alone. They work relentlessly to build relationships, stress details and teach themselves to become better assistants.

“I think players respect anyone who can help them get better and there is a factor of ‘OK, you actually did this,’” said June, who started coaching preps in 2011 before moving into the college ranks and rejoining the Colts. "Yes, there is that there and I think it's like that with anybody. It's like I want to learn from a pilot that actually flew a plane. Is it necessary? Not at all.”

The 51-year-old Mawae still talks vividly about the heated, biannual battles he faced when Tennessee played Indy. During those four seasons, the Colts won three division crowns and reached two Super Bowls; Mawae's Titans won one AFC South title, but did not win a playoff game and he doesn't mind telling stories.

Yet today's players know Mawae's contributions didn't just come on the field. He also served as president of the NFL Players Association from 2008-12 and, together with then-Colts center Jeff Saturday, helped strike a deal to end the 2011 NFL lockout.

Today, Mawae finds himself on the other side of the labor line though he's still so passionate about the union he has discussions with Colts center Ryan Kelly, who serves on the NFLPA's executive committee, and current NFLPA president J.C. Tretter.

It's another way for Mawae to earn trust as he continues pursuing a Super Bowl ring.

“I understand the game from not just on the field, but the backside of it as well," he said. “It's kind of funny. You walk a fine line because you're not one of them anymore, I'm on the coaches side. But at the end of the day, it's all about the game. It's about making players be the greatest they can be.”

That philosophy benefits players such as Pittman most.

He's a big, scrappy, receiver who thrives making contested catches and is coming off his first 1,000-yard season. This year, with another new quarterback in Matt Ryan and a relatively young, unproven receiving group, Pittman is expected to play an even more significant role and it's Wayne's job to get him ready.

“These guys they play ‘Madden’ all day, I'm not on ‘Madden’ anymore. So it's just a different world, a different feel," Wayne said. "But I think that's good to some degree, That way I can teach them who I am as I teach them how to get better."

And Wayne finds himself being both pupil and teacher as he was for much of his previous Colts career.

“When you've got a coach that's played the game, it's a little different, we relate a little different," Wayne said. "I go to everybody, I even go to Coach Frank and ask him. So I kind of take everybody's stuff, put it in a little pot, stir it up, see that it's seasoned real good and see how it tastes afterward."