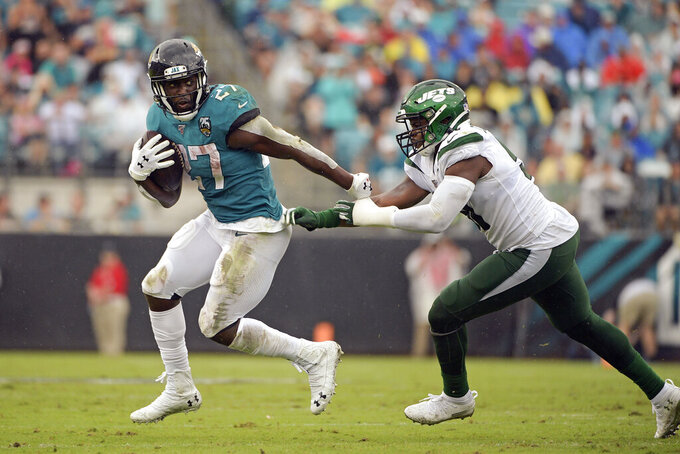 JACKSONVILLE, Fla. (AP) — Jaguars running back Leonard Fournette was in the middle of three dustups this season — and got praised for how he handled them.

Fournette was a peacemaker — no longer the instigator — in all three situations.

Many believe it's a sign of growth for the fourth overall pick in the 2017 draft, a player who created more headaches and headlines last season for what he did off the field than on it.

"I let people down," Fournette said last month. "I don't want to do that again."

The former LSU star endured the worst season in his 24 years in 2018, and it carried into the offseason. He was injured, suspended and on the bench in crunch time. He was fined, criticized and admittedly not in ideal shape late.

The most telling part: The Jaguars voided the remaining guarantees in his rookie contract following his one-game suspension for fighting, and personnel chief Tom Coughlin ripped him for being "disrespectful" and "selfish" during the season finale. Adding to the chaos, Fournette was arrested in April for driving with a suspended license.

He was clearly at a crossroads.

He responded with a comeback.

Marrone isn't ready to claim Fournette's season a total turnaround, but he does see progress.

"I don't want to get into where (people are saying), 'He was awful,' but has he gotten better? I think absolutely," Marrone said. "A lot of players have, though, from the first year or second year and having gone through injuries, which is always tough. ... You see that, and it's great growth.

Fournette had nowhere to go but up after last season.

He finished with 439 yards rushing and five touchdowns in eight games after running for 1,040 yards and nine scores as a rookie. He missed 11 games in his first two seasons, including two because of suspensions. He was more of a problem than a pro.

Fournette spent part of the offseason training in Dallas and then went to Wyoming to work with his college strength and conditioning coach in hopes of getting back to his "foundation." He then arrived in Jacksonville in the best shape of his NFL career, down about 15 pounds from the end of last season.

And the results are showing — even though he's barely sniffed the end zone.

Fournette has 831 yards rushing and 1,126 yards from scrimmage as Jacksonville (4-5) enters its bye week. Both are tops in the AFC. His scrimmage yards also are the most in team history through nine games.

He's the only player in the NFL with at least 70 yards from scrimmage in every game this season, and he's one of three — Carolina running back Christian McCaffrey and Minnesota receiver Stefon Diggs are the others — with three plays of 50 or more yards this season.

And he did most of it behind a shaky offensive line that includes a rookie and a first-year starter and with a rookie quarterback, Gardner Minshew. Former Super Bowl MVP Nick Foles returns next week at Indianapolis, a potential boost for the entire offense.

The change also could help Fournette find the end zone, something he's done just once this season. His mounting frustration was evident in a victory against the New York Jets last month, but he's otherwise been a model teammate — equal parts peacemaker and playmaker — in his third year.

"I think growth," Fournette said. "The vibe is just different from last year. Despite everything that we had going on, despite what we have going on right now, the vibe is there.

"We're playing for each other, and that's a good thing. We've got to keep it up."