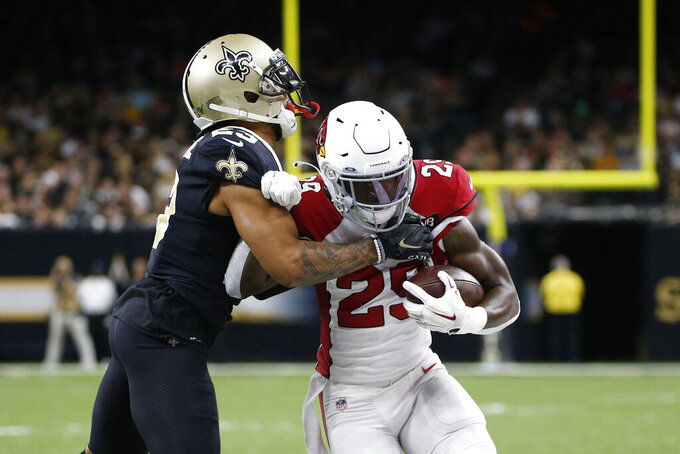 NEW ORLEANS (AP) — The Arizona Cardinals chose the wrong place and time to fail on fourth down.

Trailing the Saints 10-6 midway through the third quarter Sunday, coach Kliff Kingsbury gambled on fourth-and-1 from his own 30, four plays after cornerback Patrick Peterson had intercepted Drew Brees. But running back Chase Edmonds was stuffed up the middle for no gain, and New Orleans snuffed out Arizona's hopes, quickly pulling away to win 31-9 in Brees' return from a thumb injury that had kept him out for five games.

"After getting the turnover, we had to make something happen," Kingsbury said. "Unfortunately, it didn't work out and you have to give them (the Saints) a lot of credit. They are a great defense and made the play."

Arizona had been 5 for 5 on fourth-down tries — the only NFL team with a perfect success rate — but Edmonds' run to nowhere fit the pattern for the day. He had 8 yards on seven carries before leaving with a hamstring injury later in the third quarter.

The Cardinals, playing without starting running back David Johnson (knee, ankle injuries), had only five first downs before that fateful fourth-down call.

"Credit to those guys," Edmonds said. "They just did a good job of shooting the gaps, and we were unfortunate. I've got to find a way to get that yard, though. It's not an Xs and Os thing. When it's fourth-and-1, man, we've got to just find a way."

The Saints needed only five plays to score on Latavius Murray's 15-yard reception, going ahead 17-6. They tacked on another touchdown after the Cardinals closed the gap to 17-9 and put it away on Brees' 9-yard scoring toss to Michael Thomas with 5:18 left.

"It was huge, because any fourth down stop is basically like a takeaway," Brees said. "The momentum shift that comes along with something like that is really big for a team."

Arizona right tackle Justin Murray blamed himself after getting pushed into Edmonds' way.

"I did not do my job on that play," Murray said. "One of 11 not doing their job on the biggest play of the game definitely hurt us. Coach had faith in us and we have to convert."

Arizona had trouble sustaining anything, finishing 2 of 12 on third downs. Rookie quarterback Kyler Murray went 19 of 33 for 220 yards, but could not guide the Cardinals to a touchdown. They settled for a pair of 31-yard field goals by Zane Gonzalez in the first half and his 50-yard kick in the third quarter.

They missed their best opportunity when receiver Larry Fitzgerald could not get his second foot down in the end zone after catching a fade from Murray in the second quarter. He appeared to have room but took a big step and crossed the sideline, forcing the Cardinals to kick their second field goal.

"I would love to have been able to get the other foot down," said Fitzgerald, limited to two catches for 8 yards. "That would have been a decisive play in the game. Kyler put a great ball on me, and I expect to make those plays."

Finally, Kingsbury tried to force the issue, keeping the offense on the field after Murray overthrew Edmonds under pressure from defensive end Cam Jordan on third-and-1 at the Cardinals 30. The risk-reward quotient appeared poor from that spot on the field, but Kingsbury said analytics supported his decision.

"If you feel like a gutsy offensive coordinator, you trust your guys," Jordan said. "We trust our guys more."